Oregon St. Loses A Recruit, Then Lands A Top Trio

Share All sharing options for: Oregon St. Loses A Recruit, Then Lands A Top Trio

Today would turn out to be a landmark day for Oregon St. men's basketball recruiting, as the Beavers experienced their best 1-day haul in the history of the program, and one of the better days ever, anywhere.

But it started off on a down note, when it was announced by head coach Wayne Tinkle that Cameron Oliver will not be coming to Corvallis for fall term after all.

Oliver, a 6'8" power forward that was a 3-star recruit signed with Oregon St. for the 2014-15 season in the late signing period, lost his junior season to a torn ACL, and as a result, fell through the early recruiting craze cracks. But a big bounce-back senior season resurrected his recruiting prospects, and Oliver chose Oregon St. over Arizona St., Oregon, San Jose St., and Pepperdine, signing on the first day of the late signing season.

Oliver remained a Beaver commit even after former coach Craig Robinson was fired, and figured to provide immediate help to new coach Tinkle this season, when the cupboard would have still been relatively bare even if he had made it into school.

But if this season is going to be difficult, with no seniors and only 9 scholarship players in the program, today provided tremendous hope for the 2015-16 season and beyond. 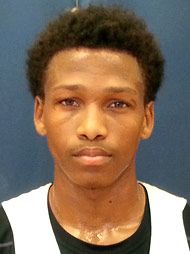 Bruce, above, is a 3-star prospect, and had also had discussions with Arizona St., Arkansas, California, and Colorado.

Then Tinkle got the news that many expected, and hoped for, though it was far from assured, even given the family ties that made it possible for the Beavers to be in the running for a pair of 4 star recruits they normally never would have had a shot at.

Both Tinkle's son Tres, a 6'6", 180 lb. small forward, and assistant coach Stephen Thompson's son Stephen Jr., a 6'3", 165 lb. shooting guard, announced together that they would be following their fathers to Oregon St., after spending their senior seasons with their current high schools. 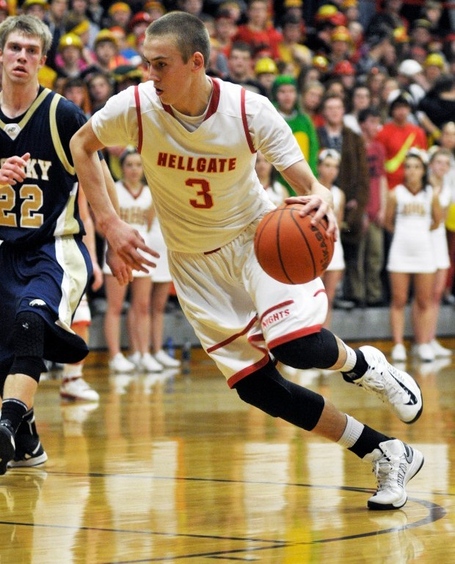 Tres, above, was the MVP of the Montana State Tournament, playing for Hellgate High from Missoula, MT.

Combined with last week's commitment of 4 star in-state recruit Drew Eubanks, Oregon St. now has the 9th ranked recruiting class for 2015 according to Scout.com. If all 4 make it in, it could be the Beavers first ever top-10 recruiting class, something not even contemplated in decades.

All 4 visited the Oregon St. campus this past weekend together, and while Eubanks had announced his decision, the other 3 decided during their visit that they wanted to play together as collegians.

No reason for Oliver's not coming was disclosed, but had he enrolled, without further roster erosion, Oregon St. would be over the scholarship limit next season, whereas they are at the 13 player limit, and as such, are probably finished recruiting for next year.