Sean Mannion has passed all others on his way to the top.

Mannion had one of the most prolific seasons any Oregon State quarterback has ever had. He set a new Pac-12 passing yard record with 4,662 yards, and set OSU records in touchdowns (37), passes attempted (603), and passes completed (400). With Brandin Cooks running routes, they were one of the most lethal combos in the country, and the offense ran rampant over the first half of the season. 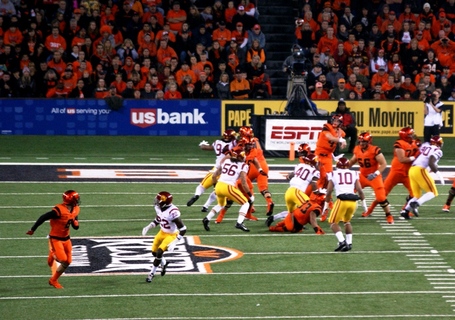 The second half of the season was a little lower though, as he failed to reach 300 yards for the first time against Stanford, and would only barely get above that line again. Not too much was all his fault, as the offensive line shattered against stronger fronts and Mannion did not have time to through. The loss of Kevin Cummings in that game also hurt, as he was a reliable pass catcher and was not replaced by Malik Gilmore. He still had a fantastic season though and it got him some attention from the NFL.

There have been discussions about Mannion for Heisman, but unless the Beavers go on a huge run or he has one of the best statistical campaigns in the history of the NCAA, he will not be a real candidate. He should be able to help bring home wins for the Beavers though, as he is able to get through reads quickly, has good arm strength, and is able to throw accurately.

The weapons are not all there, but if Mannion wants to leap up draft boards and gain recognition, he needs to improve everyone around him. That is what the great ones do, and despite losing a 1st round pick in Cooks, Mannion needs to step up even further. The main thing for him will be to quickly make his reads. 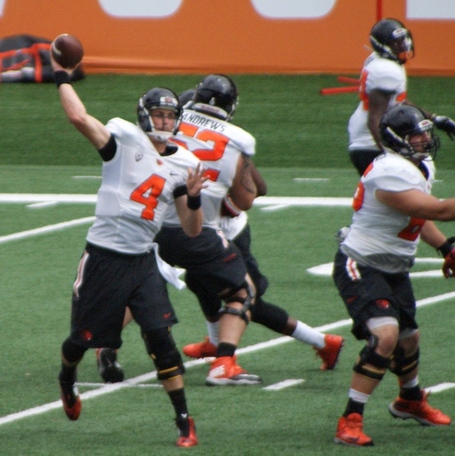 His arm is what it is, his release takes a little extra time, although he is able to zip it pretty well with the extra motion. WIthout much mobility though, he needs to get the ball out quick. Pre-snap reads will be critical to this as well, and Mannion already looked to use more audibles in game 1 this year than he has in the past.

Mannion will leave as the most decorated quarterback to ever play for OSU, and the all-time leader in passing yards in the Pac-12. If he plays up to his top potential this could be another winning season for the Beavers, but much of the hope rests on his shoulders. Hopefully he is ready to carry the load.