It was a historic night as Sean Mannion becomes the Oregon State passing leader, passing Derek Anderson for most career yards. In the game Mannion gets lots of help from his running backs, receivers, and especially the defense to propel the Beavs by the San Diego State Aztecs 28 to 7.

The opening kickoff provided one interesting note as place kicker Trevor Romaine made his return to the field, in place of Garrett Owens, who was not active, after handling kicking duties in the first 2 games of the season.   Romaine's kickoff went deep into the end zone, but an opening Oregon State offside penalty bodes ill as San Diego State offensive coordinator Bob Toledo brings out the trick plays, a drive starting reverse, below, and a flea-flicker pass off of a reverse, to put the Beavs on their heels.

Behind solid upfront blocking and Donnel Pumphrey rushing the Aztecs marched the ball down the field for an opening Pumphrey two yard touchdown run to take an early 7 to 0 lead.

Oregon State's opening drive petered out, forcing the Beavs to punt, but the defense steped up to force a three-and-out.   The momentum does not last long for the Beavers, who then cough the ball up on the punt return with a Victor Bolden fumbled catch.  Steven Nelson makes his presence known quickly to bounce the home crowd back by intercepting Quinn Kaehler's pass, below, to give the ball back to Sean Mannion and the offense. 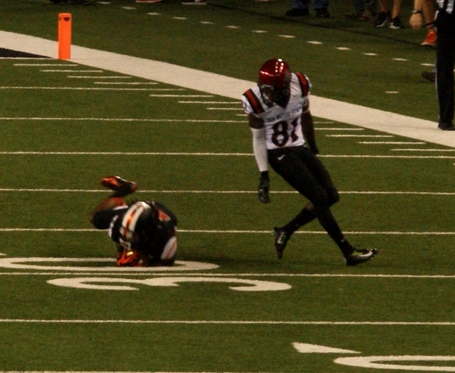 The OSU offense looks to be ready to give it right back on a missed offside pass block that blindsides Mannion, but somehow the Beavs recover the ball.   But it seems to be ready to go even further in the wrong direction for the offense as a false start and then a sack puts the Beavs in a 2nd and 27, but Mannion coverts the down with a long throw to Hunter Jarmon, below, who makes good this evening on his now owning the #7. 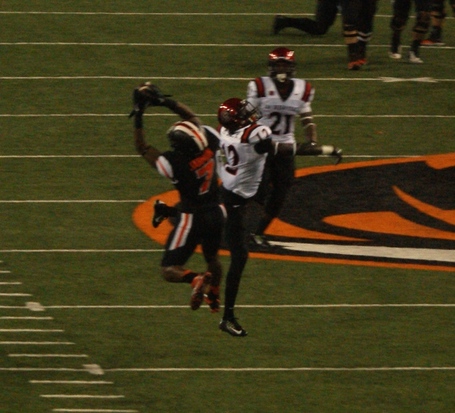 A big interference penalty then allows the Oregon State offense to stay on the field, which they later make the most of  with a Terron Ward 12 yard rushing touchdown, below, to tie the game as the first quarter comes to an end even at 7 to 7. 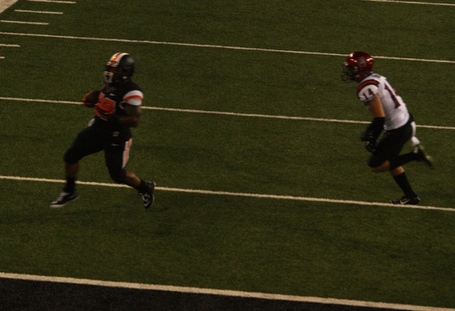 The second quarter goes back-and-forth as the defenses for both teams force punts, but a perfectly placed ball from Mannion to Victor Bolden that drops off Bolden's fingertips does make one imagine a 14 to 7 lead for the Beavs, which instead the seemingly nicely paced drive ends in a Beavs punt. 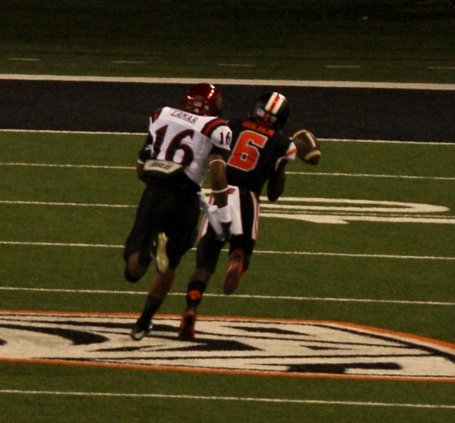 Worse news though comes in the form of a possible Bolden hand injury on the play, which led to Bolden leaving the game. Bolden suffered a dislocated pinky finger on his right hand, and had to go to the hospital for further treatment.

With the bad news of Bolden going out for the game with an injury, Sean Mannion picked up his game finding players such as sophmore fullback Ricky Ortiz and freshman wide receiver Rahmel Dockery, for a 49 yard completion down to the Aztec 2 to drive the field, leading to in the last seconds of the half Terron Ward two yard TD run.  It was a drive that saw only two rushing attempts to Mannion's seven pass plays. 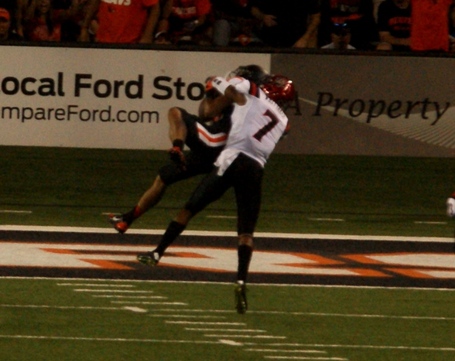 "We have seen in practice that Rahmel can go up and make those kind of catches, and handle the ball, so I just tried to put some air under the ball (for him)," Mannion explained.

Oregon State took the second half kickoff, and Sean Mannion made OSU football history overtaking Derek Anderson for the most passing yards in school history.   It was a solid opening drive mixing runs and passes, including Storm Woods five yard TD run; but it was something special to see Mannion break the record, converting a long third down play where Sean scrambled out of a strong San Diego State rush to throw to Hunter Jarmon for another 27 yard play, placing Mannion on top of the OSU record books. 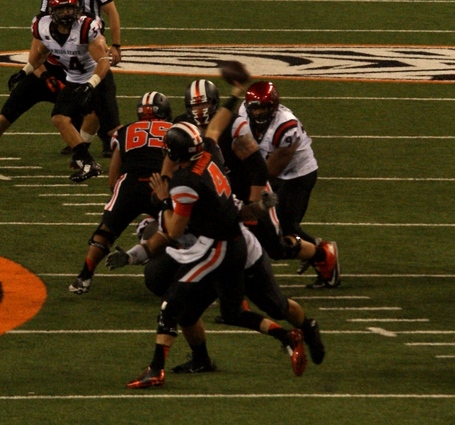 Sean Mannion, above, broke the Oregon St. career passing yardage record with a completion to a wide open Hunter Jarmon, below. Mannion finished completing 24 of 31 passes, to 10 different receivers, for 275 yards and increased his career total to 11,339 yards, trailing only USC's Carson Palmer and Matt Barkley on the all-time Pac-12 passing yardage list. 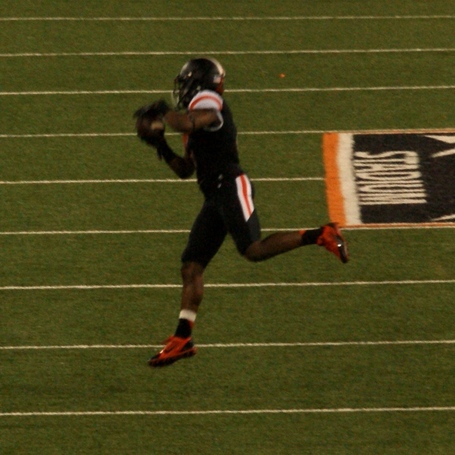 The Aztcs did initially respond the opening Oregon State touchdown, establishing a bit of the rushing game back, but the Oregon State defense steps and forces a punt to give Mannion and the offense the ball again.

The OSU offense then marches down the field again to score on a Storm Woods two yard TD run.  It was another excellent mix of rush and pass plays combined with well called plays against the San Diego State blitzing schemes, and overall just plain started to demonstrate how worn down the Aztecs defense had become in the game.  The San Diego State defense self-destructed with two huge pass interference calls in the end zone, and most importantly for Oregon State their drive put the Beavers up 28 to 7 at the 1:16 mark of the 3rd quarter.

San Diego State attempted to bring back some late game bad memories for the Beavers from their last game in Hawai'i, as the Aztecs drove the field and looked to close the gap with some solid running and with a long pass completion.  The Oregon State defense though again stiffened, as they stepped up and stopped the Aztecs offense on a fourth down to give the ball back to the Beavs offense for the first time in the 4th quarter.

The Aztecs defense showed they were still down for the game as hey force a fairly quick Oregon State three-and-out.  In this week's game though, the Beavs defense learned its lessons well from the previous games and continued to play dominating and smart football throughout the entire 4th quarter. 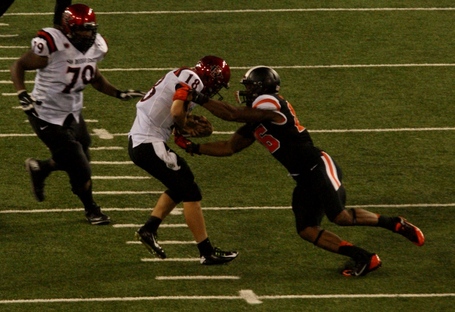 The offense did not click as much overall in the 4th quarter and was more content with keeping the ball on the ground and running the clock down, but Mannion did have one poorly thrown ball for an interception to be the only blemish on Sean's game resume.

The final numbers saw Oregon State with 372 total yards, breaking down to 275 yard passing and 97 yard rushing.  Mannion went 24 for 31 for 275 yards and ironically enough on his historic night, Sean did not throw a TD pass.  Woods had 52 yards on 11 carries with 2 TDs, and Ward had 50 yards on 15 carries with also 2 TDs.

The receivers were led by Hunter Jarmon with 76 yards on 5 catches and Richard Mullaney with 46 yards on 3 catches, including a 21 yard reception, below, midway in the 4th quarter as the Beavs worked on clock and field position to close out the game. 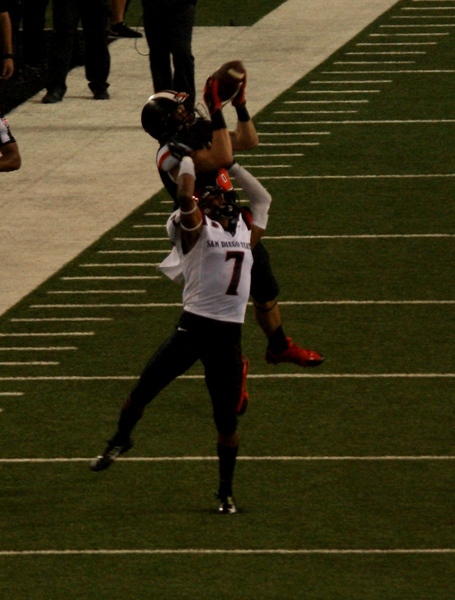 Michael Dockery had a strong game defensively, with 4 solo tackles to lead the Beavs,

It was a game that looked a little shaky for Oregon State on the opening San Diego State drive and with their own first offensive possession, but really these opening possessions were aberrations as the Beavers stepped up their game and pretty much dominated both sides of the ball.  It was nothing like the 2013 game in San Diego, and the Beavers did not need any 4th quarter magic come back to win this time around against the Aztecs.

San Diego St. only had 140 yards of total offense after the opening drive.

Mannion was sacked 3 times in the first quarter, but not again, after Oregon State committed their tight ends to additional blocking support. It led to Connor Hamlett and Caleb Smith combining for only 3 catches, but it kept Mannion in position to direct the offense.

"They did some things we hadn't seen on film," Mannion said. "Once we made some adjustments for that, we were able to get back to it being more about what we do than what they did."

The season amps up two to three notches next week as Oregon State goes on the road for their first Pac-12 game of the season against the 17th ranked USC Trojans.   SC will be a tough match up for the Beavs for sure, but this team is making some solid headway with cleaning up big time costly mistakes (penalty yardage was cut in half from their season average so far), and also the team as a whole just continued to improve against a well coached and athletic San Diego State team.  The most impressive part of the game was Mannion's total control of his game.  It was not a totally overwhelming game in terms of yards gained passing and he did not have a TD, but with Victor Bolden going out of the game with an injury Mannion spread the ball around to ten different receivers, including wide receivers, running backs, full backs, and tight ends.   This type of smart and solid play on both sides of the ball, and QB leadership will be essential as the Beavs now move into their conference schedule.