It was an incredibly slow and frustrating start for the Oregon State football team in terms of scoring and executing on both sides of the ball without penalties. In the end Beavs were able to overcome a ton of mental mistakes to take control of the game for their first win of the season over the Portland State Vikings 29 to 14.

On a drizzly opening early afternoon the Oregon State Beavers opened rusty with a barrage of penalties in the first quarter that helped keep the game tight in the first half.

It was John Garrett's first game as OSU's new Offensive Coordinator and he had to be pleased at times but also frustrated with the play of the offense.

The first quarter saw the Beavs trying to break in the young offensive line, along with the replacement center Josh Mitchell, and it showed both jitters and rust as the opening snap sailed over Sean Mannion's head, followed by a false start, and then a holding call (that was declined); all of which lead to the Beavs going backwards and having to punt the ball away on their first possession of the 2014 season.

The punt by Keith Kostol did put Portland State deep at their own 15-yard line, and the Beavs defense holds for a quick three-and-out.   Oregon State's second possession looked sharper as the Beavs drove the field from their own 40-yard line. 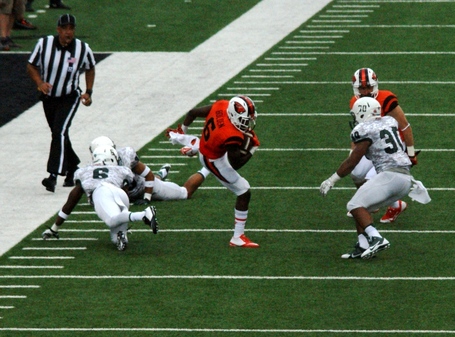 Victor Bolden made a nifty play and spinning run down the sideline, above, which brought back early memories of Brandin Cooks, but as a harbinger of things to come Oregon State could not punch it in after a 1st and goal. 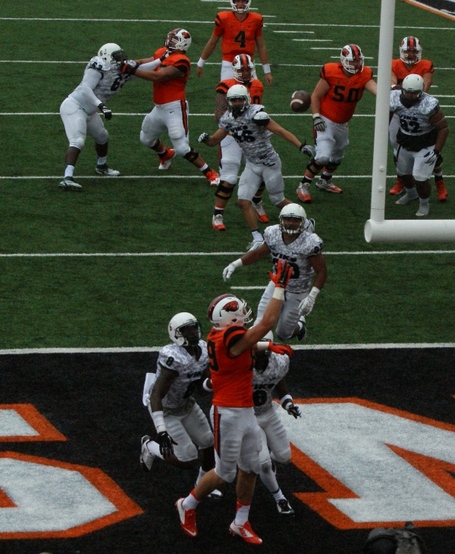 Redshirt Freshman kicker Garrett Owens put through his first OSU career field goal (since OSU does not have last season's starting kicker Trevor Romaine) from 25 yards to give the Beavs a 3 to 0 lead.

The defense holds strong again leading to another Portland State punt at the 6:26 mark.   The offense again struggles with penalties, but does get the gears clicking more after a 50 Storm Woods run, below. 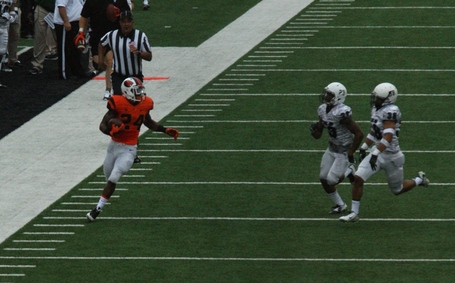 Again though a huge false start penalty kills a possible fourth and inches play attempt leading to another 25-yard Owens field goal to put the Beavs up 6 to 0.

Portland State though takes advantage of the sloppy execution by the Beavs and lack of Oregon State being able to put the game away. After having an apparent long completion on the last play negated because the clock had run out, the Vikings Paris Penn opens the second quarter with a 58 yard rushing touchdown, below, to give Portland State a 7 to 6 lead. 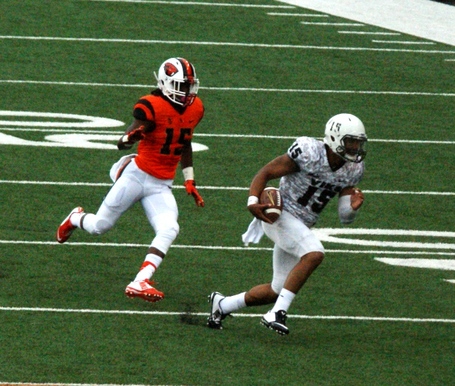 Oregon State and Sean Mannion though get a break with a huge Bolden receiving play wrestling the ball away from the Vikings defender, and Mannion takes full control of the ball marching the Beavs down the field, even overcoming another in the red zone false start penalty, to score Oregon State's first 2014 touchdown on a rare Mannion scrambling run for a six yard touchdown, below, giving the Beavs a 13 to 7 lead. 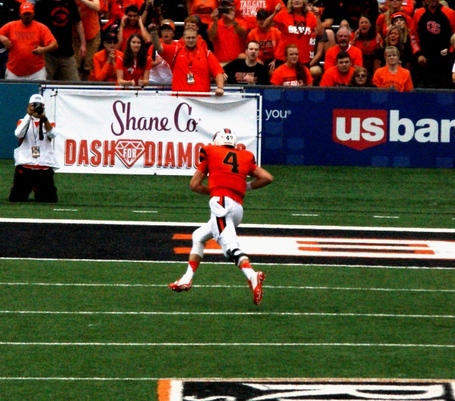 The defense stepped things up to get what looked to be a key three-and-out, but yet another penalty, a late hit on the quarterback by Dylan Wynn, gives the Vikings renewed life.  The OSU defense doesn't buckle on a trick play attempt to keep the reverse back to the QB pass short of the 1st down, but Portland State converts the 4th down AND gets another Beaver penalty on a late hit that is then followed by a horse-collar personal foul to give the Vikings a 1st and goal.  In a seeming miracle from the football gods Portland State seem to shoot themselves in the foot with a holding call (their first penalty of the game), but this is followed up by a defensive holding call on OSU to overturn a great defensive coverage play in the end zone.  As such, in the end where the Beavs had an initial three-and-out, the Vikings get enough second chances to score their go ahead TD again on another Penn run, below, this one for 11 yards. 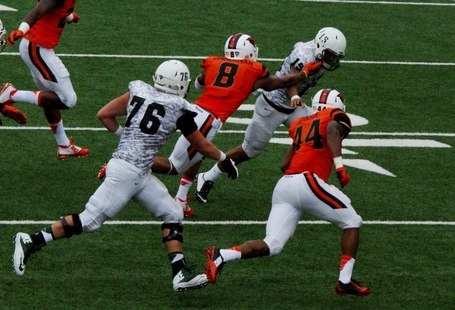 The Beavs offense stalls on the next possession to give the ball to Portland State at the 3:58 mark of the second quarter.  The defense looked to be a bit on their heels again, but they shore things up enough to force a missed field goal attempt, and more importantly gave Mannion another chance.  Mannion is able to drive the Beavs down the field for a 50 yard field goal attempt that does goes through on the Vikings timeout but Owens misses wide on the counting attempt.

Even with the mental mistakes the Beavs are able to sneak into the half only down 14 to 13, with 285 total yards versus the Vikings' 175 yards.   Mannion goes 16 for 22 for 197 yards with one rushing TD, and Woods led the Beavs rushing with 66 yards on 5 carries.  But the key stat of the half was the Oregon State 10 penalties for 89 yards (yes that was for just one half of play).

The second half opens with Portland State barely fielding the kickoff and then another trick play pass leads to a Beavers Tyrequek Zimmerman interception, below. 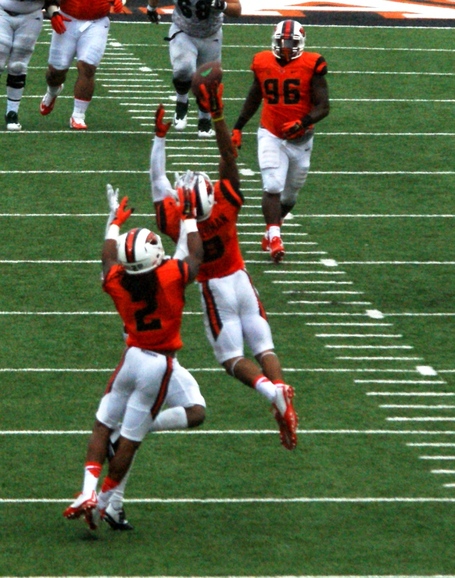 The offense behind Woods' strong rushing and a penalty break from Portland State on a late hit personal foul drives the field to give Owens his third field goal of the game to put the Beavs up 16 to 14. 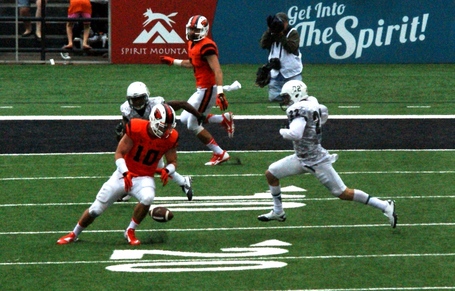 Again though lack of red zone production ends up frustrating an opportunity for Oregon State to fully gain control of the game.

The worm starts to turn in the second half with Portland State playing the penalty game and also allowing the OSU defense to step up its game forcing a key three-and-out on the Viking's second possession of the half.   This forced a deep in the end zone punt allowing for Bolden to get the Beavs to PSU side of the field.  A big time catch by Richard Mullaney to convert and 4th and ten goes for not with more OSU penalties driving the Beavs backwards and out of scoring position.  Keith Kostol though provides a highlight by perfectly placing his punt on the one-yard line pinning PSU deep. 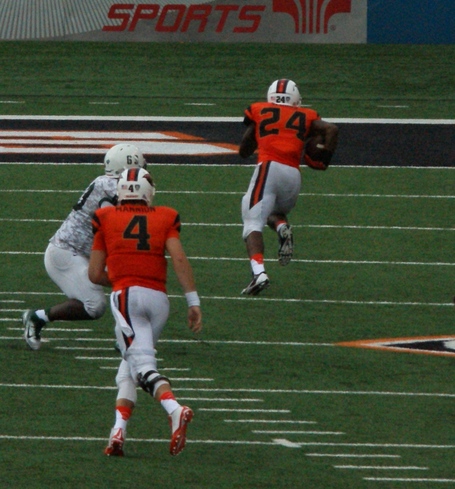 After yet another Oregon State penalty the OSU defense forces another turnover on a Michael Doctor fumble recovery, which FINALLY leads to a quick Mannion to Woods 23 yard touchdown pass play, above, to put the Beavs up 23 to 14 at the 5:07 mark of the third quarter. 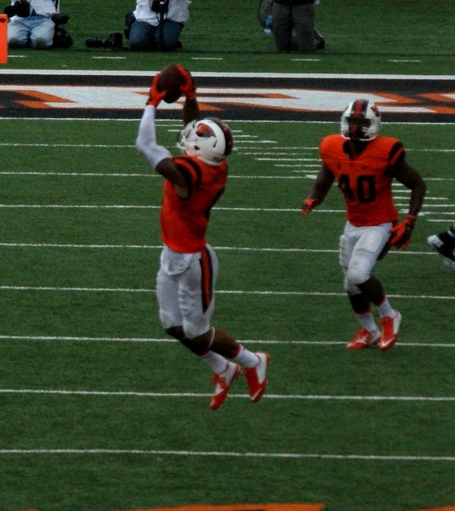 From there it finally becomes more downhill for the Beavs defense as Zimmerman gets his second INT, above, which leads to another struggling red zone appearance for the offense and leading to another field goal by Owens (31 yards).

Oregon State recovered a fumbled punt at the end of the third quarter, but the Beavs return the favor though on some poor on the edge blocking that leads to Mannion being blindsided for a fumble that goes to the Vikings.  But turnaround is quick as Portland State coughs up the football to the Beavers on their second play from scrimmage in the fourth quarter.  Owens though misses a close range field goal continuing the trend of Oregon State not being able to capitalize on taking full control of the game.  This lack of red zone control comes out again with the Beavs settling for yet another short field goal after a getting to the PSU 6 yard line to put Oregon State up 29 to 14, which ends up the final score for the day. 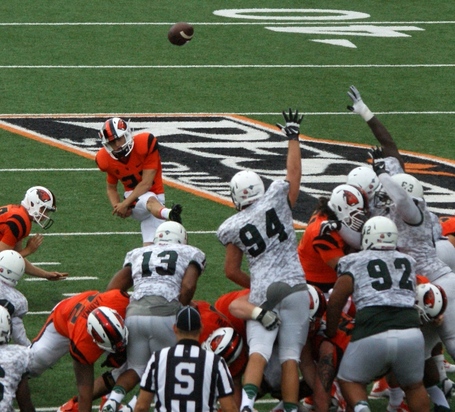 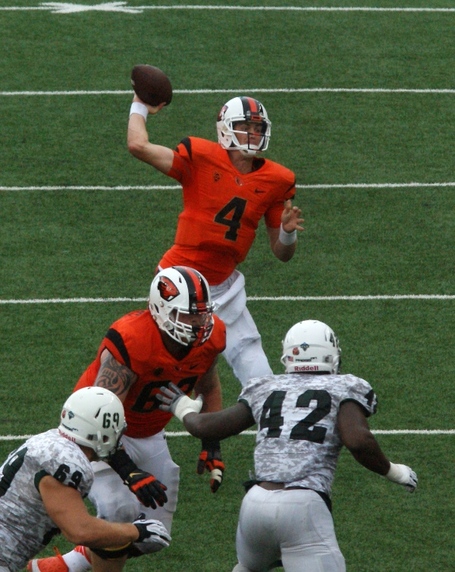 Mannion, above, threw for 328 yards on 26 for 45, and Storm Woods led the team with both 126 yards rushing on 16 carries and one touchdown reception.   On the receiving end Connor Hamlett had 86 yards and Richard Mullaney, below, had 55 yards, both on a co-game high 5 catches. Bolden also had 5 catches, 4 in the first half. 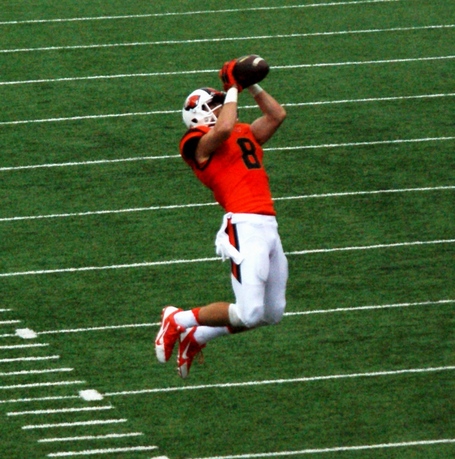 Again though a key stat in keeping this game as close as it was for a good part of the time was the Beavers 119 yards on 13 penalties.

McDonagh completed 8 of 17 passes, for 65 yards, but Penn, the Vikings' "running" qb, completed only 1 of 8 passes. Penn's 112 yards on 9 carries accounted for most of Portland St.'s rushing total of 131 yards, as Oregon St. held Shaq Richard to just 24 yards on 10 carries.

Of the Vikings total of 214 yards, and only 40 net yards in the second half.

Yes the game was ugly with all the penalties and turnovers (especially in the barrage of turnovers around the midpoint of the second half), and yes the Oregon State offense was rusty, but overall the Beavs moved the ball well at times (especially on the ground), the defense came up solid when needed, and the new young kicker got a lot of experience (that one is the "silver lining" part of the game).   One has to think that the different faces on the field and having a new Offensive Coordinator there was always going to be rust, and in the end this was the type of game to shake those things out.   That said, it will be essential though that the team work out the kinks seen in this game and improve much more against Hawai'i next week.

For this week though, it was enough to cue the fight song. 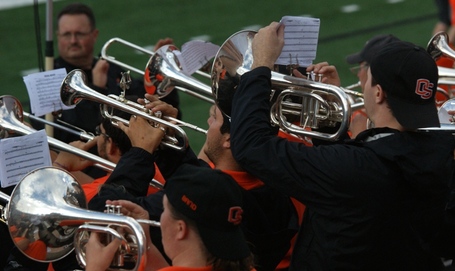