When healthy Seumalo is the anchor of the Beaver offensive line, and he holds up at number 3.

Seumalo missed the first game of the year with a knee injury, but after that would play the rest of the season. He primarily lined up as a center, but he also played at right tackle for a bit. The line was not super productive, but Seumalo did a good job of getting to the second level and picking up blocks there as well. He showed good mobility, and as the brains of the line, he did an okay job making the calls.

Seumalo has been hurt and will be back at the earliest against San Diego State. This is his biggest issue for the season; he has lost all of camp, both spring and summer. The offensive line has even had time to gel, although they had a rather poor first game. At this point in the year it is almost time to start thinking about redshirting this season. It would not be the first occurrence of an OSU lineman that used his redshirt year late because of injuries. Michael Philipp did it after he started in 2008 as a true freshman. Seumalo may need to take the same route, though head coach Mike Riley has stated that Seumalo will be back this season. 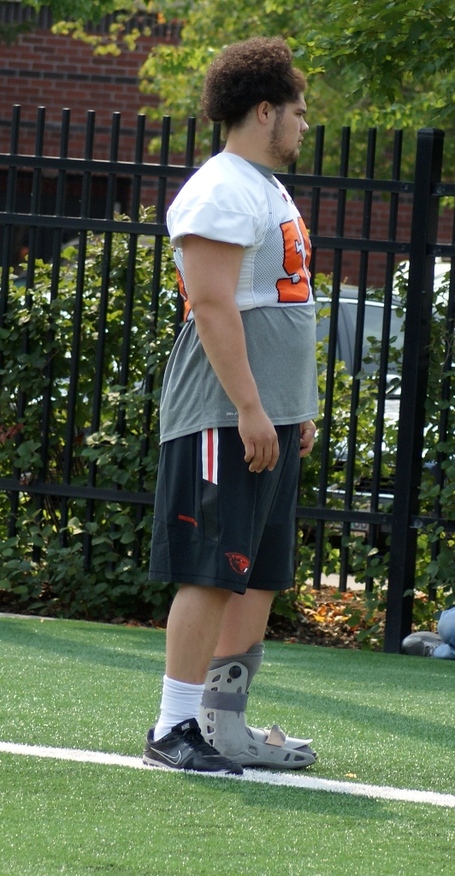 Whenever he gets on the field he can make a difference. He is consistent with his snaps, he has the strength and agility for run or pass blocking, and he has the intelligence to manage the line. Before his injury, he was nationally recognized as one of the top offensive linemen in the country, at least by nominations to watch lists. If he can get healthy he will immediately return to being one of the best players for Oregon State.