Share All sharing options for: Rate Coach Robinson On The 5 Beavertail Scale

It's time once again to rate Oregon St. men's basketball coach Craig Robinson using the patented 5 Beavertail system developed by Fanoverboard that we use after the season ends for each of the Beavers' major programs. You can review coach Riley's last rating here, and coach Casey here.

Last season, Robinson's third, Oregon St. went 10-19 overall, and 5-13 in the Pac-10. It was the second consecutive season of decline in results after Robinson's 18-18 first season, which included a run to the CBI tournament. It was also the only one of his 4 years leading the Beavers that didn't end with a trip to the CBI tournament. And more respondents rated Robinson 3 tails, Beaverage, than any other option. However, nearly as many, 37%, only awarded 2 tails.

This year, Robinson for the first time had almost entirely a team of his own making, with only one senior, captain Kevin McShane on the team who had not been recruited by Robinson. And no one who had played under previous coach Jay John. Chemistry issues and the mixing of old and new players couldn't be cited as a cause for any dis-function on the squad for the first time.

And things got off to the best start in a very long time, as the Beavers breezed through their non-conference schedule 10-2, though it wasn't a particularly challenging slate of opponents. Only Texas, Vanderbilt, and Montana reached the NCAA tournament.

Ironically, though, in a year when the Pac-12 collectively struggled mightily against quality non-conference opponents, the win in overtime over Texas in New Jersey in the Ticket City Legends Classic stood as the best win anyone in the Pac-12 posted.

The Pac-12 season got off to a rough start, with the Beavers dropping both games on a winter break trip to the state of Washington. Oregon St. returned home, and beat California 92-85, a loss that ultimately contributed to the Golden Bears losing the Pac-12 regular season title to Washington by one game, in one of the best games of the season. 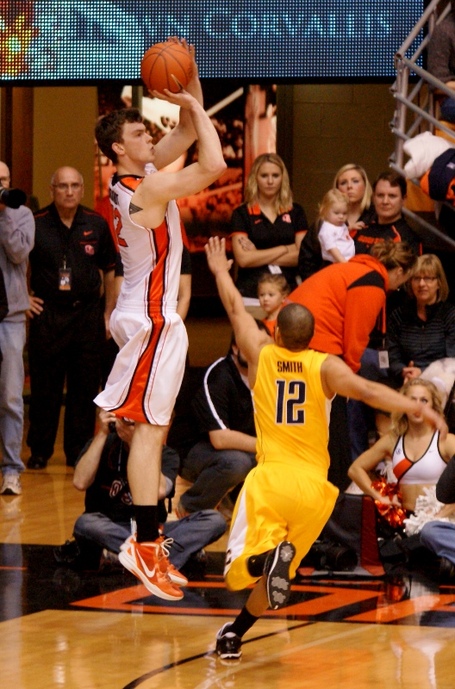 Angus Brandt proved to be a real mismatch for opponents on several occasions this season.

Two night later, the Beavers locked up with Stanford in what wold turn into a 4 overtime marathon that lasted more than 3 hours before the Cardinal claimed the 103-101 win.

Another brawl marred overtime loss at Arizona followed, and then a 10 point loss to an abysmal Arizona St. teamthat eventually finished 10-21 in Tempe, and Oregon St. was off to a 1-5 start one third of the way through the Pac-12 season.

The Beavers bounced back with a sweep of the LA schools, and then a 76-71 win over arch-rival Oregon at Matt Court. But then February rolled around. 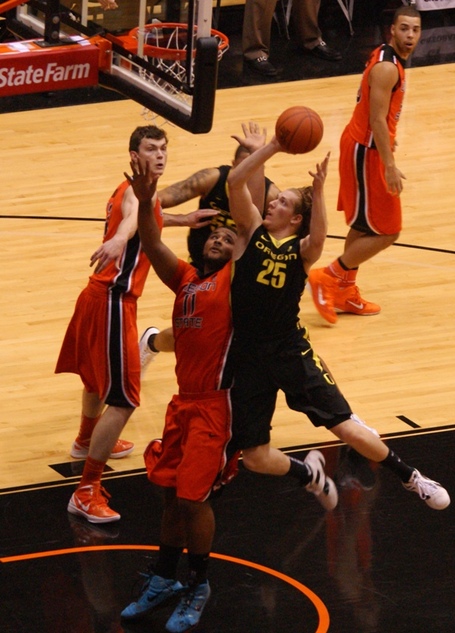 The Beavers and Ducks split a pair of intense games in 2012.

Oregon St. lost 5 in a row, their longest losing streak of the season, and 6 of 7 in the month, capped by a 1 point loss in the Civil War rematch in Corvallis.

Fortunately, March then came, and the Beavers again bounced back, winning their last 2 regular season games, and then their first 2 in the Pac-12 Tournament, which were also their first wins of the year against both of the Washington schools. The 86-84 upset of Washington cost the Huskies an NCAA Tournament bid, forcing the purple gang to settle for a run to Madison Square Garden in the NIT.

Arizona ended the Beavers' run through the Staples Center, but Oregon St. was invited to the CBI tournament, and won their first 2 games, before those pesky Cougs came to town. The 4th meeting of the season with Washington St. went exceptionally strangely, on a snowy night in Corvallis.

Washington St.'s Brock Motum injured his ankle a couple of minutes into the game, but Oregon St.'s Ahmad Starks missed the entire game ill. In the end, the Cougars advanced to the CBI finals with a 72-55 win, and the Beavers finished the season 21-15, including a 7-11 Pac-12 campaign.

Oregon St. also led the Pac-12 in scoring, at just shy of 80 points per game, and field goal percentage, and was third in the conference in scoring margin.

The Beavers also led the conference in both assists and steals. 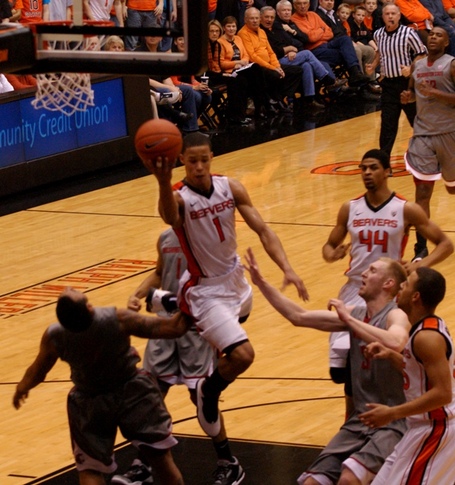 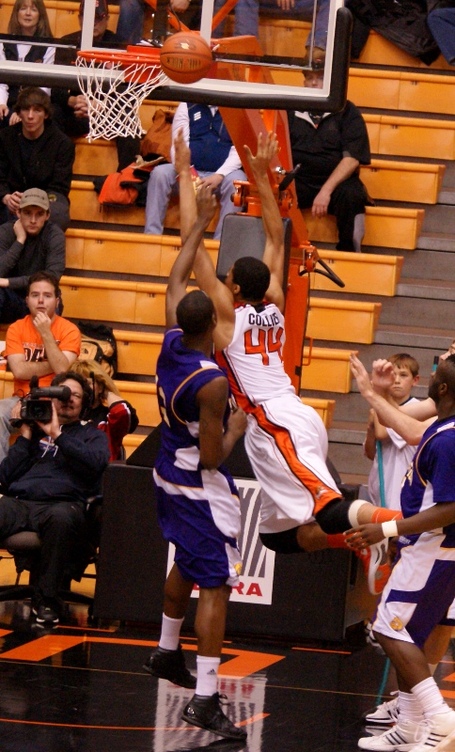 The 21 wins were the most in 22 years for Oregon St., and it was only the second winning season in that stretch.

For that reason, we are editorially eliminating the 1 Beaver Tail Beaverbysmal option from this year's rating, just as we did for Coach Pat Casey after last baseball season.

The best season in 22 years can never be Beaverbysmal.

But can it be Beaverriifc, worthy of 5 tails when its sub-.500 in conference, and the Beavers went 3-6 in the northwest? Even if they possibly cost both the Huskies and maybe even the Ducks a shot at the big dance?

And especially given that Oregon St. was last in the Pac-12 in scoring defense.

Ultimately, this year's performance won't rate a 5 tail appraisal, but under the present circumstances, could a better than 2 decade high water mark represent exceeding all expectations?

The Beavers shared the ball well, which produced the impressive offensive numbers, but they didn't defend well as a team. Weak side defense was a problem all year, and worse, it was still the team's biggest bugaboo at the end, being the reason the Cougars ended their season.

Team chemistry wasn't a problem, unlike at times the last couple of seasons when things were going wrong, a sign that Robinson has done a good job of melding a very diverse group of athletes from 4 continents into a cohesive unit.

There was no trouble with "team rules", no one was suspended or in legal trouble, and no one flunked out. Several other Pac-12 teams wish they could make that claim. There was 1 transfer, but Chris Brown's departure did not hurt the team, and could work out for him in the long run as well.

However, given the down year the conference experienced, even with a young team, the season might have been a missed opportunity. But unless Cunningham decides to go to the NBA early, an issue not many expected to be facing as recently as last season, and maybe even if he does, Oregon St. is well-positioned to make a run at an even better 2012 finish.

Robionson would seem to be turning the corner, after a couple of campaigns that rightly had Beaver Nation starting to scrutinize "Hope-in-law" closely.

Even a 2 tail, below Beaverage rating would seem to require an explanation in the comments. But there were plenty of positives and negatives to counter-balance, and cases for 3, 4, or even 5 tails can be made, and also disputed.

So cast your vote, and state your case. Going fan-overboard on the matter is encouraged!