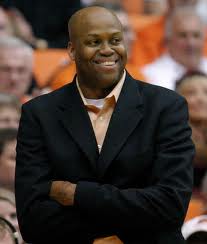 Craig Robinson came to Oregon State University in April, 2008, to replace Jay John as head coach of the men's basketball team. John (72-97 overall and 28-68 in the Pac-10) had been fired the previous January after the Beavers opened the season with a 6-12 overall record and an 0-6 Pac-10 start. The team did not win another game that season, ending 6-25 overall and 0-18 in the conference.

Robinson, seen at left in an AP photo during happy times in his first year, is a former assistant at Northwestern University who came to OSU with only two years of experience as head coach, and that at Ivy League Brown University. He was unknown to most Beaver fans, many of whom expressed disappointment over his hiring. They had wanted a bigger name coach, someone with proven credentials in major college ball, someone who could return OSU to the hardcourt glory of the Ralph Miller years--the winning records, the conference championships, and the near-guaranteed postseason bids and national recognition.

But Robinson won over a lot of fans in his first year. Off-court, he said all the right things, acknowledging that it was an honor for him to take charge of the OSU team, a Pac-10 program with a basketball heritage, speaking with confidence about the modified Princeton offense he planned to install, and pledging he'd give equal measures of skills education and tough love to his players--those he inherited from his predecessor and those he would recruit. And, boy, did things look bright for recruiting with the basketball-playing President's brother-in-law sealing the deals. On-court, the new offensive and defensive strategies paid off quickly, as an inspired and well-coached team equalled its previous season's 6-win total in their 12th game. The Beavs got their first Pac-10 victory, over USC, in January, and went on to a 7-11 conference record, 18-18 overall, including their postseason wins in taking the CBI championship. Clearly, it was Robinson who had made the difference, since the players were the same ones who had performed so poorly under coach John the year before.

Things were looking up for Oregon State basketball. With Robinson's leadership, and his new recruits, surely the team would achieve a winning record in his second season, and by year three, well, anything was possible--contending for the Pac-10 championship, earning a bid to NCAA postseason play. But that's not the way things have worked out. Something has gone terribly wrong.

The Beavers went 14-18 overall, 8-10 conference, in their second season under Robinson, losing in the first round of the CBI, after another charity bid to an OSU team with a losing record. This season, the team slipped further back, finishing 10-19 overall, 5-13 Pac-10. The record is particularly frustrating for fans, because their team has shown strength in causing turnovers and snagging rebounds, but more often than not has been unable to convert those possessions into baskets. Indeed, Beaver shooting from layups to 3-pointers and everywhere in-between has been poor in most games. Although the team has at times shown brilliance--as in its victories over Arizona, Washington, and USC--the more typical performance involves falling way behind, scratching to catch up, then wavering in the final minutes to lose. Fans cannot understand how the inspirational Robinson of year one, the teacher of skills Robinson, the tactician Robinson, could turn into the exasperated Robinson of years two and three.

Oh, coach Robinson still flashes a smile and talks a great game in his off-court interviews and speaking engagements. But in view of his three-year record at OSU (40-49 overall, 18-28 Pac-10), fans can't help but wonder if the man is capable of delivering where it counts, on the court. Was Robinson's first year turnaround success just a fluke? Or is it the following two years that are unrepresentative of his coaching skills and that first year that showed us the REAL Craig Robinson, back to the wall, coaching his heart out?

Even though it's only been three seasons, fans can't help but rate the coach, and it's their prerogative to do so. Let's convert your estimate of coach Robinson's performance into a numeric rating. RATE THE COACH ON THE POLL BELOW, AND FEEL FREE TO EXPLAIN YOUR RATING IN THE COMMENTS.