Cunningham Out Duels Joseph As Oregon St. Bounces Back For Civil War Win

Share All sharing options for: Cunningham Out Duels Joseph As Oregon St. Bounces Back For Civil War Win

Oregon St.'s Jared Cunningham out-dueled Oregon's Devoe Joseph as the Beavers battled back from multiple double digit first half deficits to down the Ducks 76-71 in the 336th. basketball Civil War.

After an awful first half, Cunningham came up with 24 of his game high 27 points in the second half to out-score Joseph, who hit 8 of 16 shots, and 5 of 9 3 pointers, and led Oregon with 26 points, 22 of which were after the break. Most importantly, Cunningham connected on 12 of 15 free throws, a big part of the edge Oregon St. had at the line, where the Beavers made 21 of 30, compared to 16 of 24 by the Ducks. A difference equal to the difference in the final score.

"I told Jared that our best player would have to help us win games on the road," Oregon St. coach Craig Robinson said. "So not only did he have the pressure he was putting on himself, but I put that added pressure on him."

Oregon St. made only 4 of their first 18 shots in the games' first 12 minutes, and Oregon took a 20-10 lead 5:50 before the break. It would be the worst half of the season scoring wise for the Beavers, who needed a 9-2 run capped by an Ahmad Starks 3 pointer to be down only 28-23 at halftime. The previous low point was the start to the Idaho game, where Oregon St. scored only 24 points.

Joe Burton almost single handedly kept Oregon St. in the game, with 8 of his 10 points in the first half. Burton's shooting brought the Beavers up to 29% for the first half. Cunningham hit only 1 of 7 shots, and 1 of 3 3s, while Starks sank only 1 of 6 shots, and just 1 of 4 from long range, as Oregon St. shot only 22% on their first half 3 pointers.

Oregon wasn't setting the nets on fire either, shooting only 36% from the field, though they were 38% on 3 pointers, making 3 of 8. E.J. Singler, below driving against Angus Brandt, had 2 of the 3s, and had 10 of his 16 points in the early going. 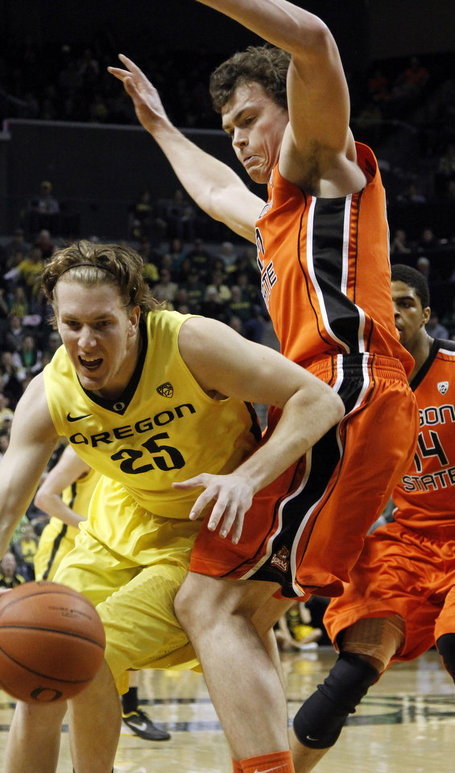 Eric Moreland, the conference's leading shot blocker, is always involved in one of the key story lines of the game, but usually he's the one doing the blocking. But in the first half, he had a couple of his shots blocked, and Oregon had an 8-0 edge in blocks at the break. The surprising stat of the game would grow to a 10-0 edge for the game, 4 by Tony Woods.

But Moreland more than made up for it in the second half, with a game and career high 4 steals, and several serious disruptions of the Oregon offense while working at the front of the Oregon St. zone defense. Overall, the Beavers were +5 on steals, and the Ducks were +6 on turnovers. It was as essential to the turnaround as the improvement in shooting, where Oregon St. shot 57% from the field, and 71% on 3 pointers in the second half, while holding Oregon to 41%, and just 27%, 6 of 22, on 3 pointers after the break.

It's hard to say if Oregon St.'s shooting struggles can be partially attributed to the extreme contrast in lighting inside Matthew Knight Arena between the center of the building and even the basket areas, never mind the background, but the Beavers also struggled last year in their first visit, shooting only 37%, and 19% for the game on 3 pointers.

Fortunately for the Beavers, they finally figured out the range in the second half, and made some defensive adjustments as well.

"In the first half they had 15 second chance points," Robinson noted. "We said, `we're the team who's tall and athletic'. That was our thing at the half." 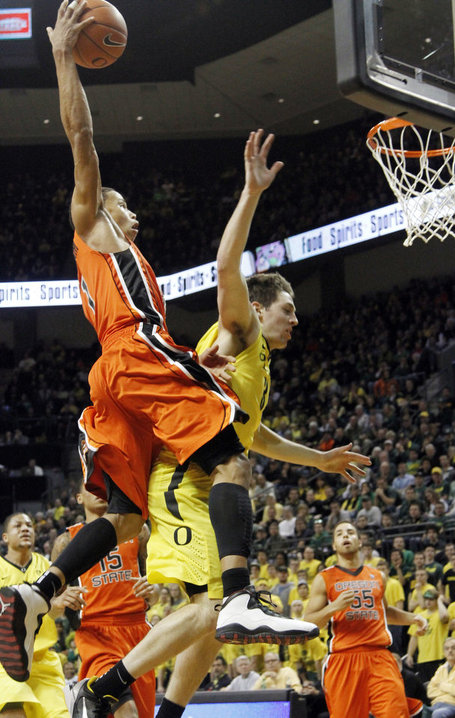 Cunningham served notice his slump was over shortly after the break, with a steal and a give and go basket to cut the deficit to 3 points, but it would take a while before the Beavers would catch up.

Garrett Sim answerd Cunningham's highlight play with a basket that started a 6-0 run, and though Starks' 3 pointer pulled the Beavers within 36-30, they were still shooting less than 30% 4 minutes into the second half.

Cunningham connected on a 3 pointer and then a layin off one of Moreland's steals coming out of the first media timeout, and the 8-0 run made it a 1 point game.

Joseph buried back to back 3 pointers to give him 18 for the game, and reopen a 6 point lead, but a steal by Burton that led to another Cunningham basket that pulled Oregon St. within 1 point, and made Cunningham the 36th Beaver player ever to reach the 1,000 point mark.

Another Starks 3 pointer capped a 17-3 Oregon St. run that gave them a 56-48 lead with 9 minutes to go, and the Beavers built the lead as large as 12 points on a Devon Collier basket that made it 63-51, but with still over 6 minutes to go. 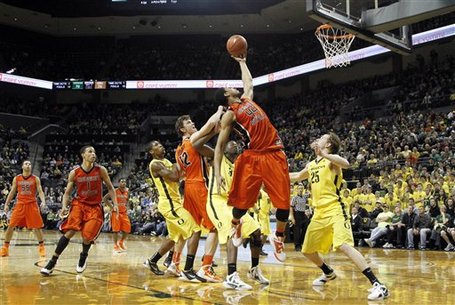 Oregon St.'s Devon Collier was 5 of 7 from the field, and finished with 13 points.

But the Ducks were far from finished, responding with a 7-0 run in a minute. A key call came when Carlos Emory reached in for a rebound Burton had both hands on, and elbowed Burton on the nose, yet still drew the foul call on Burton. It was a terrible call, but Emory converted the free throws, and even more importantly, when Singler drew a legitimate call on Burton to get the free throws that made it a 5 point game with 5 minutes left, it was Buurton's 4th. foul.

Robinson stayed with Burton however, and the Beavers rebuilt an 8 point lead on a Collier dunk off of a Starks steal with 3 minutes to go.

It took Oregon a minute before Joseph scored, and then the fouling commenced. There were 3 fouls in a matter of 4 seconds, but the margin was the same 7 points as it was before the fracas.

Oregon's inability to hit from the field then probably cost them the game, as the Ducks missed 3 consecutive 3 pointers, another inside shot, and then another 3 point shot.

But after Singler turned the ball over, Starks threw it straight to Sim, and Joseph finally re-located the range, cutting the deficit to 4 points with still over a minute to go.

Cunningham connected on a pair of free throws, but Singler answered with another 3 pointer, and it was a 1 possession game with 50 seconds left.

Starks turned the ball over again, stepping on the end line, but this time Singler missed a 3, and subsequently fell down, turning the ball back over.

Oregon St. hit 1 of 2 free throws 3 times in the last 25 seconds to pull out their first road win of the season in Pac-12 play, and their first ever at Matt Court. Oregon had won 29 of the last 36 games in the Civil War series since the 1994-95 season. The win also snapped a 13 game conference road losing streak.

Singler, a 90% free throw maker, missed 1 of 2 with 11 seconds left, which prevented Oregon from making it a 1 possession game again.

In addition to Cunningham and Burton, Starks and Collier also finished in double figures, with 15 and 13 points respectively.

"We came out slow, but we were only down by five at halftime," Cunningham said, "so we picked up our intensity in the second half. I knew I needed to attack, and be more vocal in the second half. We were more aggressive after the half. We played hard to the end. It was good that we were knocking down our free throws at the end."

Emory was the only Oregon player in double figures besides Joseph, below battling Cunningham for one of his baskets, and Singler, finishing with 11 points, including 7 of 8 at the line. Emory also was the game leader on the boards, with 10 rebounds. 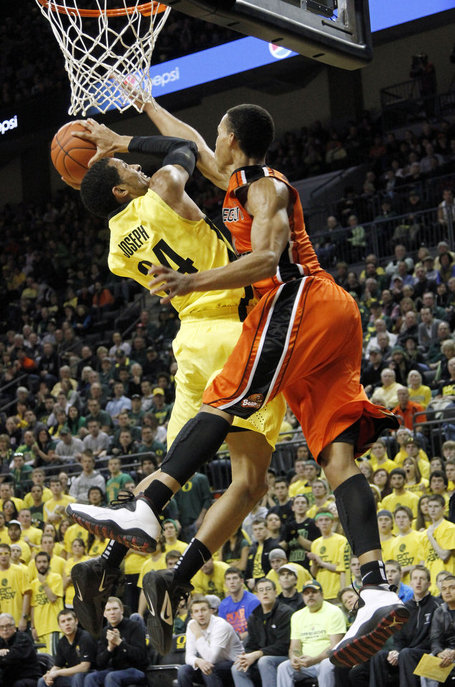 Oregon (15-6, 6-3) saw their 4 game winning streak snapped, disappointing the majority of the near capacity crowd of 11,219, and fell out of an opportunity for a first place tie with Washington (14-7, 7-2), after the Huskies' sweep of the Arizona schools this weekend, and California (17-5, 7-2), who downed Stanford 69-59 immediately following the Civil War game. 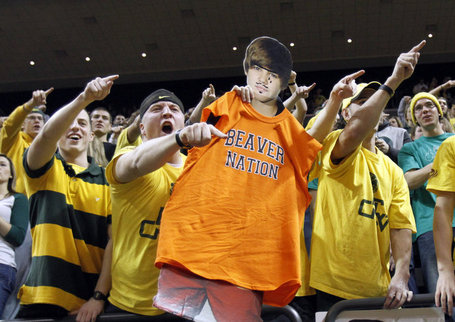 But Connor and the rest of Beaver Nation had the last laugh, celebrating a Civil War

weekend sweep of the Ducks, after the men followed up yesterday's 67-60 comeback win

by the women with another come from behind win of their own.

Oregon St. (14-7, 4-5) extended their winning streak to 3 games, and though they remain in 8th place in the conference race, are only a game behind the 3 way tie for fifth between Stanford, Arizona, and UCLA, who are all 5-4 half way through the Pac-12 season.