It was a hard fought back and forth Civil War game today in Corvallis. OSU freshman Ali Gibson had a huge second half to lead the Beavs from an eight point deficit to win the first 2011-12 installment of the Civil War series.

In a live televised game the Beavs overcame some poor first half shooting, poorly executed inside the post offense, and Oregon's so-called high octane offense to rally from eight points down late in the second half, at the 7:36 mark, with a 22-7 run to the finish to beat the Ducks 67 to 60.

Gibson had a career high 23 points that included some very timely 3-pointers and a wonderful alley-oop basket late into the game. The highlight was her 3-pointer, right, to put the Beavs up five with just under two minutes left in the game.

"They weren't recruited (by Oregon)," Oregon St. coach Scott Rueck said of his squad. "They believed they had something to say about that."

Gibson wasn't alone though and Patricia Bright had some strong defense down the stretch including more blocks, none more key than a late block when the Ducks were trying to close the final couple minutes gap. Bright also put in a double double with 12 rebounds and 11 points to go along with her continued above record pace four blocks.

And Alyssa Martin hit two key three-pointers in the final few minutes that were instrumental in closing the eight point gap Oregon built including the 3-pointer that gave the Beavs a 59 to 57 lead at the 2:47 mark, a lead that the Beavs then did not relinquish, and she also made some important last minute free-throws.

Patricia Bright put up an 11 point, 12 rebound double double to

help the Beavers beat the Ducks.

It was a game where the 3,719 crowd (largest crowd to see a women's game in five years) and the television audience, including myself, were wondering if the Beavs would ever find that second gear after some sloppy ball control play and having some major issues cracking Oregon's strong interior zone defense. That said Oregon State played some solid overall defense and held the high scoring Oregon offense to only 25 points at half and 60 total. They also held off a strong return performance from Oregon's star player Amanda Johnson who scored a team leading 16 points for her first game coming back from a broken thumb injury. I was impressed that the team did not give up when the Ducks made a very strong run that looked to be one of those where the game gets away from a team. Additionally I thought the way Gibson took over the game was a very encouraging sign for this team's future.

The Beavs shot 44% from the field in the game and overall it wasn't the most spectacular of shooting performances (both teams played some tough defense though I thought) but they hit the key shots at the key times. It was just one of those rivalry games where things become very tense and hard fought and the just the right shots at the right time ended up all that was needed. The Beavs ended up the team making those shots. Plus the offense was methodical with taking the clock down on every position to help the defense keep the pace of the game in the Beavs favor. As noted the OSU defense was very good I thought holding the Ducks to 35% from the field, and overall did a wonderful job at slowing down the UO offense such as creating an important momentum building 30 second clock violation on the Oregon side. 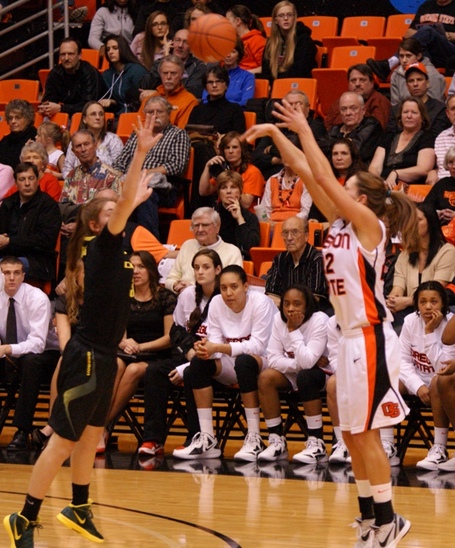 Sage Indendi sinks a 3 pointer that pulled Oregon St. within 57-56 as the Beavers

rallied from 8 down to defeat Oregon.

And beyond the excellent Civil War win, and taking it to our rivals, this game was an important one in moving Oregon State up in the Pac-12 standings. OSU is now at 4 and 5 in the conference and has a very respectable 13 and 7 overall record. Additionally this win along with losses by USC and California, and with Colorado and UCLA playing each other tomorrow, places the Beavs up into the second upper tier of the conference (Stanford really being once again in their own tier by themselves). Not bad at all for a team that went 2 and 16 last season in conference play.

Oregon is now 3 and 6 in the Pac-12, but still 11 and 10 overall. Eight teams are separated by 2 games in positions 4-11 in the standings midway in the conference season.

I have to admit I was a bit skeptical of the team in the first half, but it was a first half that saw swings back and forth and the Beavs leading at halftime. I became even more skeptical as the second half seemed to turn in the Ducks favor but in grand tradition of a true Civil War game you can't count one or the other team out and in the end with the help of Ali Gibson I was believing!

Congrats to the team for a hard fought and important win and for an excellent turn around season so far. Some challenging games still to come, but with a strong finish this team can possibly see some postseason play as well as put a stamp on a season that the program can build upon for the future. Cue the Fight Song! 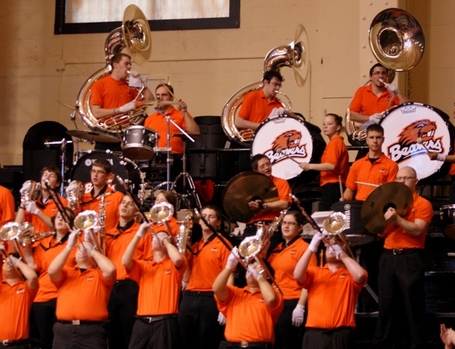