Share All sharing options for: Oregon St. Pulls Out Win Over Washington

In a game that featured some massive runs by both teams, at the end it came down to defense, balance, and free throws, and it was Oregon St. that mounted a 13-4 run to pull out the win over conference regular season champion Washington in the opening game of the second round of the Pac-12 Tournament.

After being swept in the regular season by both of the Washington schools, Oregon St. has exacted some revenge when it really mattered, sending both of their northerly neighbors back north, while the Beavers will be hanging around in LA for another day, with a Friday evening tournament semi-final game next on their agenda.

"We've been together since this season from the start, from summer workouts all the way up until now," Cunningham commented. "We're a close knit group, and we love each other and want each other to do well. You see it out there on the court. We didn't give up at the end. We just kept fighting, sticking through it, and we grinded it out."

The first half was mostly Oregon St., although it didn't look like that would be the case in the first few minutes. The Beavers missed their first 6 shots, and Jared Cunningham appeared to be still mired in the slump that saw him score only 4 points, as he missed his first 3 shots.

But his buddy Joe Burton put back Cunningham's 3rd miss, and shortly afterwards, Cunningham, the conference's leading ball stealer, stripped Washington's tony Wroten, and the dunk that followed was the days' contribution to the Cunningham highlight video. It also put Oregon St. up 9-8, and sparked the Beavers.

Cunningham scored 6 straight points for the Beavers, and the renewed energy led to 9-0 and 6-0 Oregon St. runs that saw the Beavers take a 13 point 46-33 lead to the locker room.

Angus Bradt opened the second half with the basket that opened a 15 point lead, which would prove to be the largest margin either team achieved. Barely 2 minutes into the second half, the Beavers were ahead 51-37, and the Orange faithful were already daring to think ahead to Friday night.

But the Huskies were far from done, and completely wiped out the difference in the game with a 17-3 run in less than 5 minutes.

Abdul Gaddy had a pair of 3 pointers in the run, and C.J. Wilcox's 3 pointer tied the game at 54 apiece with still nearly 13 minutes to go.

Oregon St. suffered a scoring 2 different scoring droughts of well over 3 minutes in length, and Washington worked their way to their largest lead of the afternoon, going up by 8 on Wroten's basket that made it 66-58 with just under 9 minutes left.

It prompted an Oregon St. timeout, and the Beavers got back to their big men for offense. Devon Collier put back his own miss in heavy traffic, and subsequent baskets by Eric Moreland and Collier, both off Cunningham passes, kept the Beavers within range despite 2 baskets by Wilcox and another by Wroten.

Brandt buried a 3 pointer to pull Oregon St. within 4 points, but Washington was able to keep the Beavers at arm's length for several minutes of intense action, and still led 77-71 with just under 4 minutes to go, on a Wroten basket. 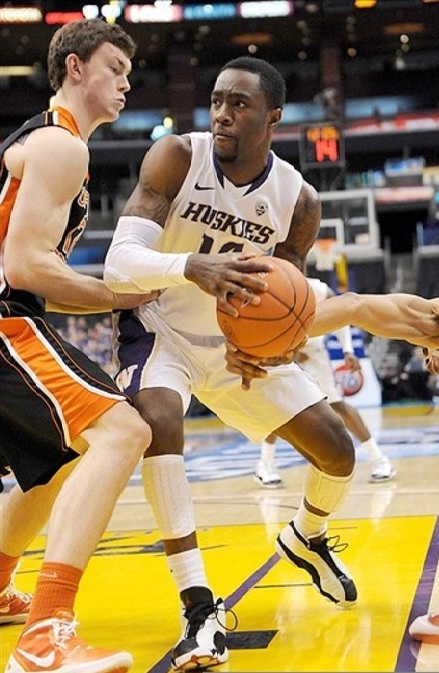 Wroten poured in a game high 29 points, but couldn't deliver from the

It would be the last basket from the floor the Huskies would score though.

Wroten made 6 consecutive free throws, and Oregon St. was still 4 down with barely over a minute to go.

With former Oregon St. stars A.C. Green and Gary Payton again urging the Beavers on from the sidelines, and Brent Barry as well today, Ahmad Starks sank the 4th of his 3 pointers for the game to make it a 1 point game, and after a Terrance Ross turnover and another Oregon St. timeout, Cunningham put the Beavers ahead to stay with a half minute to go. 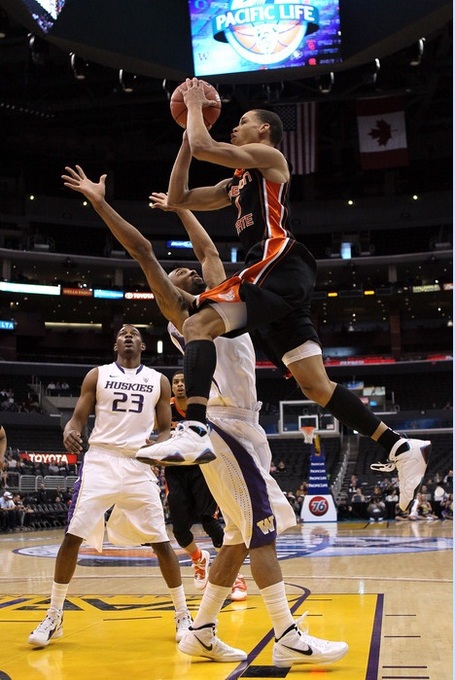 Jared Cunningham flys past the Washington defense for 2 of his 18 points.

Wroten, who already had what would be a game high 29 points, which was not only a career high, it was the most points ever scored in a game by any Husky, proceeded to miss a shot, and then wrapped 4 missed free throws around a pair that Cunningham missed, as the one point game remained tense in the final seconds.

Cunningham finally put Oregon St. in a commanding position with a pair of free throws with 6 seconds left to make it an 86-83 game.

Oregon St. head coach Craig Robinson then called for the intentional foul to not allow a possible game tieing 3 pointer, and Moreland calmly let Ross advance as far as he could, taking every tenth of a second he could, and then took the foul with only about 2 seconds left.

"We talk about that situation, and we practice it, but still, Eric executed it perfectly," Robinson felt.

Ross made the first free throw, and then intentionally missed the second, but missed everything. Cunningham missed 2 final free throws with under 2 seconds to go, but the Beavers got one last rebound, and the opportunity to play again, against the winner of the subsequent UCLA-Arizona game.

Collier led a very balanced Oregon St. effort, with 19 points. Cunningham, who never came out of the game, playing all 40 minutes, a move made necessary by a wrist injury to Roberto Nelson, almost posted a triple double, with 18 points, 10 rebounds, and a game high 8 assists. Burton, below driving through some pretty Husky defensive pressure, also had a double double, with 14 points and a game high 11 rebounds, as well 6 more assists and a steal. 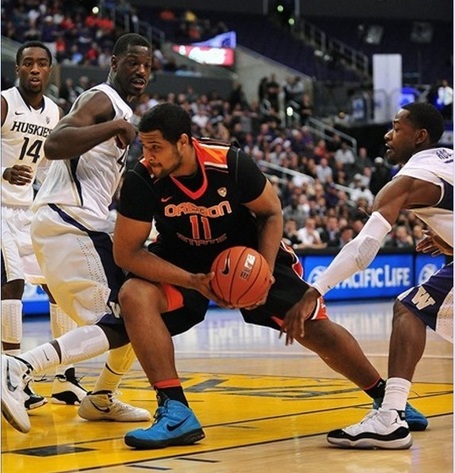 Starks' 4 3 pointers lifted him to 14 total points, and Moreland had one of his best games as a Beaver, with 13 points 6 rebounds, and 4 blocked shots, as well as the very timely foul.

Wilcox added 16 points to the Washington total, and Ross had 15. Gaddy had 13, but fouled out after committing 3 fouls in the final 30 seconds.

Darnell Gant had 10 rebounds, but only 6 points.

The Beavers were also effective in neutralizing Washington's 7 foot center Aziz N'Diaye, limiting him to 7 rebounds and only 4 points.

Neither side was happy with the game's officiating, but Robinson found satisfaction in the Beavers' comeback in a game that was less than elegant down the stretch.

"I usually feel you get what you deserve, and you deserve what you get, based on how you handle games like this. What I liked was that we went and got this one," Robinson said. 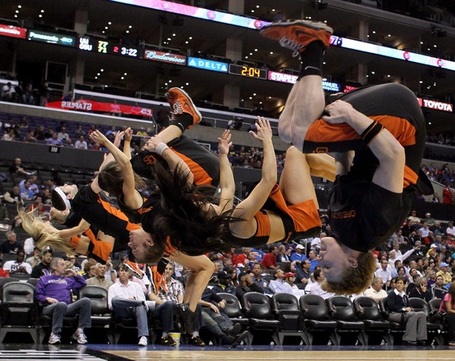 The Oregon St. cheerleaders flip out over the Beavers win over the Huskies.

Oregon St. (19-13) may have played themselves into NIT Tournament consideration as well as the conference semi-finals with what is now a 4 game winning streak, while Washington (21-10) has suffered 2 losses in a row, and will have to hope their regular season championship gets them an NCAA at large berth. They could well be looking at the NIT as well after their early exit from the tournament.