Oregon St. gave the game away 7 times, and though Stanford refused to accept the gift of a win over and over, the Cardinal finally claimed victory in the longest game ever played by either program.

The Beavers built double digit leads in both halves, only to squander then in stunningly short periods of time, and then messed up opportunities to win at the end of regulation, and each of the four overtime periods.

Oregon St. started strong, never trailing early, and opening a 10 point lead 10 minutes into the game, sparked by back to back 3 pointers by Roberto Nelson, who was playing with only 1 shoe at the time. The Beavers extended the lead to 15, the largest of the game, going up 32-17 with 6 minutes left in the first half.

But a stretch of sloppy play allowed Stanford to reel off 10 straight points, and put together a 15-2 run in just over 3 minutes to make it 34-32. Oregon St. re-extended their lead to 7 points by the break, taking a 43-36 lead to the locker room.

The Beavers expanded their lead to 12 points 4 ½ minutes into the second half, on a layup and free throw by Devon Collier, off of one of Jared Cunningham's game high 4 steals.

But instead of blowing the game open, another outbreak of stagnant offense by the Beavers, coupled with some help from the guys in the red and white stripped shirts, allowed the Cardinal to make a 13-2 run in less than five minutes.

When Aaron Bright and Chasson Randle hit back to back 3 pointers to make it 61-60 Stanford, Oregon St. had squandered their entire lead, and the Cardinal had taken their first lead of the game with 8 and a half minutes left.

No one would open more than a 3 point lead for the rest of regulation.

Gage would become the first Stanford starter to foul out, with over 5 minutes left to play, and after playing only 18 minutes. 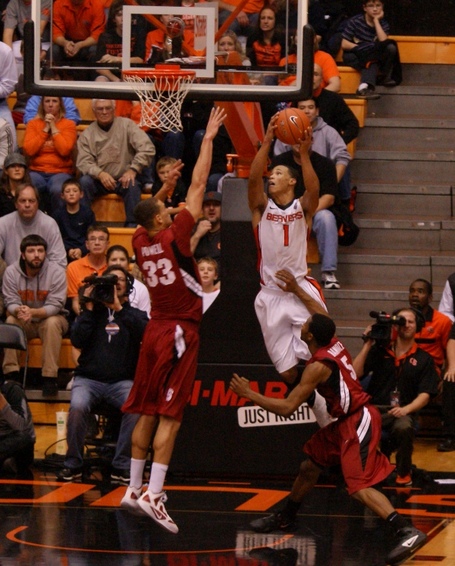 It appeared momentum might swing Oregon St.'s way when Eric Moreland made one of his game high 6 blocked shots with 3 minutes to go, and Cunningham went in for a reverse dunk, above. But the ball stuck between the rim and the backboard, and Stanford had the possession arrow.

Angus Brandt tied the game at 74 apiece with a 3 pointer with just over 2 minutes left, and after Dwight Powell's made jumper, Ahmad Starks made a pair of free throws to forge the 7th tie of the game with 1:20 left, making it 76-76. But Brandt missed a pair of free throws with 25 seconds left that left the game on the table.

Moreland rebounded Powell's missed shot with 2 seconds left, but Josh Owens stole Morelend's attempt at an outlet pass, and Stanford celebrated what they thought was a game winning dunk by Owens.

Lengthy review of replay by the officials confirmed what everyone else had seen though, that time had expired before Owens reached the rim, and the game went to overtime. Little did anyone realize there was still another entire 20 minute half of basketball to come.

Brandt missed one of two free throws with 1:45 to go, but Oregon St. took an 83-82 lead with 58 seconds left in the first extra period, after Jarrett Mann fouled out, having picked up his second foul in less than a minute, and Cunningham connected on a pair of free throws. 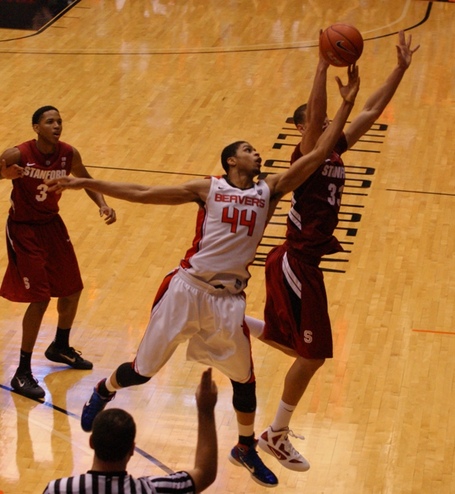 Collier stripped Powell, above, but Randle would tie it up again, but he made only 1 of 2 free throws. The Beavers never got a shot up in the last minute, and turned the ball over twice, as the officials overlooked Cunningham being shoved out of bounds as he attempted to take an inbounds pass from Burton.

Oregon St. still had a chance to win the game, taking possession after Randle's missed free throw with 23 seconds left. But Oregon St. coach Craig Robinson left time outs on the scoreboard, and Starks over-dribbled into a turnover without getting a shot up, never mind a quality look by anyone.

Cunningham put the Beavers ahead 91-90 with 46 seconds left in the second overtime, but the Cardinal took the lead back on a third chance layup by Randle, after Oregon St. allowed Stanford a pair of offensive rebounds.

This was a problem for Oregon St. all night, as though total rebounds would be dead even, at 54 apiece, once all was said and done, Stanford had 23 offensive boards, and 10 more second (or third) chance points.

"That was the difference in the game," Robinson admitted.

Burton missed the first of 2 free throws with 11 seconds left, and instead of winning the game, his second one only tied it at 92-92, and when Moreland blocked Randle's attempt at a game winner, a third overtime was needed.

The Beavers took a 2 point lead on a pair of Cunningham free throws 16 seconds into the third extra period, but only scored one more point the rest of the overtime, as Cunningham connected on only one of two free throws with 2:12 to go, after forcing Stanford point guard Aaron Bright out of the game with his fifth foul.

Randle and Josh Huestis both missed for the Cardinal, and the Beavers took possession, up 3 with a minute and a half to go. But they couldn't close Stanford out. Starks took an off balance shot, but Moreland's rebound gave Oregon St. the ball back.

Rather than run any reasonable offense, Oregon St. settled for an off-target Cunningham 3 pointer, and an undefended 3 pointer by Anthony Brown tied the game for the 14th. and last time, at 95-95.

Robinson again left a timeout on the board, and Starks ran the clock all the way down to 1 second before settling for a circus shot for the win, leaving no time for any put back when Brandt rebounded Starks' miss.

Randle put Stanford ahead for good with a 3 pointer to start the fourth overtime, and opened the lead to 100-95 a minute into the period, after back to back misses by Moreland and Burton.

Brandt blocked a layup attempt by Powell to keep the Beavers alive, and a basket by Nelson and a pair of free throws by Cunningham cut the deficit to just 1 point with 1 minute to go. 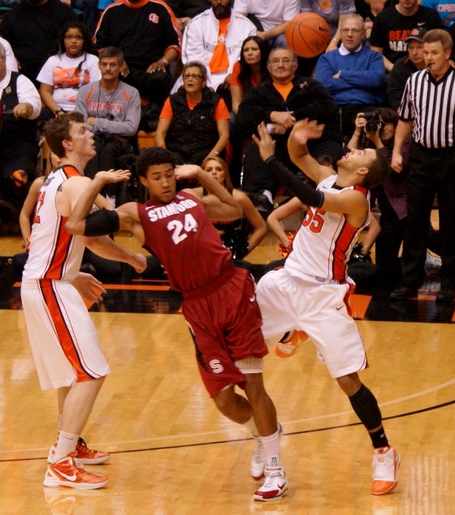 Randle's basket made it 102-99 Stanford, but with 18 seconds left, Nelson, after being fouled shooting a 3 pointer, above, made only the last 2 of the free throws, leaving Oregon St. still a point behind with 18 seconds to go.

Cunningham stole the inbounds pass, but both he and Collier missed shots against heavy uncalled contact, only to hear the whistle blow against Nelson.

"We decided not to foul, and go for the steal," Robinson explained, "and Jared did get the ball. I was about to call a timeout, but we kept getting shots up. I was sure we were going to get a basket, or get a foul called."

Neither happened though, but Huestis only made the first of two free throws, and Oregon St. still trailed only 103-101.

Robinson finally did use a time out to set up the last possession. But inexplicably, he went with a play for Nelson to take a long, low percentage three pointer to try to win the game, when an easier two point basket would have extended the game.

With 3 Stanford starters already disqualified, and Powell with 4 fouls, the longer the game went on in front of crowd of 7,239, over 7,200 of which were Beaver fans, the more the situation favored Oregon St. in the war of attrition. So the strategic move would have been to get the ball to Brandt, the conference's second leading shooter, who was standing in the paint as the final shot went up.

Or to Collier, the conference's leading shooter, whom Robinson pulled during the final timeout. Or maybe Cunningham, the team's leading scorer.

But it seemed Oregon St. was bound and determined to not win, and eventually, they didn't, sending what had been the loudest crowd of the season home in stunned silence.

Credit is due to Stanford, and Cardinal coach Johnny Dawkins, who succeeded in turning the game into gutter ball, a style that much better suited them, and in the end, allowed them to get the win, which produced a split of the weekend for both them and the Beavers. 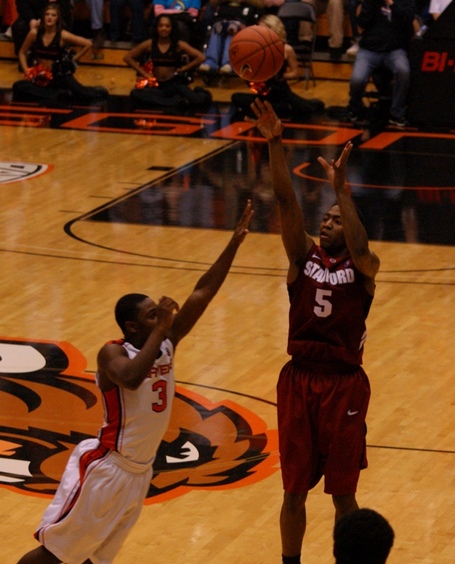 Randle, above, had a game high 24 points off the bench for Stanford, and Bright added 18, after making 4 of 5 three pointers. Bright also led the Cardinal with 6 assists.

Both Owens and Powell posted double doubles, as Owens scored 16 points, and Powell 10. Both grabbed 11 rebounds each. Gage also got into double digits, with 10 points. 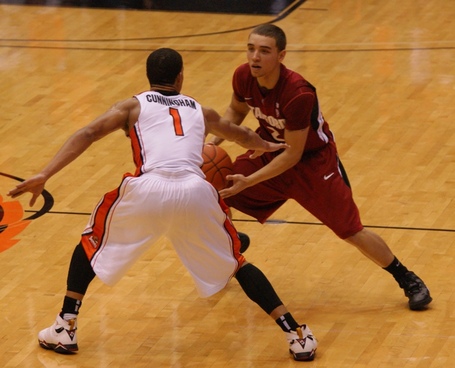 and though Cunningham scored 1 more point, and Bright fouled out, it was Bright

who ultimately walked away happy.

Cunningham made 10 of 13 free throws, and co-lead Oregon St. with 19 points. Nelson also posted 19, in only 25 minutes. "Only" being a relative term in the over 3 hour long marathon, which saw 4 players for each team play 40 or more minutes, with Cunningham logging a game high 54 minutes of action.

Burton and Collier both posted double doubles. Burton had 18 points, tieing his career high, and 10 rebounds, while Collier came off the bench for 16 points and 11 rebounds, and also 3 blocked shots and 2 steals, in 34 minutes.

Starks scored 13 points, and had 5 assists, but struggled with his shooting, making only 5 of 17 shots, a terrible 29%, and only 1 of 6 three pointers, less than 17%. Brandt rounded out the 6 Beavers in double figures, with 10 points.

Cunningham was only 25% from the field, and bad backcourt shooting contributed to failing to put the game in the win column as much as any number of other factors in a game that was hard fought, but hardly well played, or officiated. Everything from flagrant elbows, an automatic technical foul, and an NCAA point of emphasis, to players being out of bounds with the ball were routinely overlooked, even after what had to be a record number of video reviews for a single game. 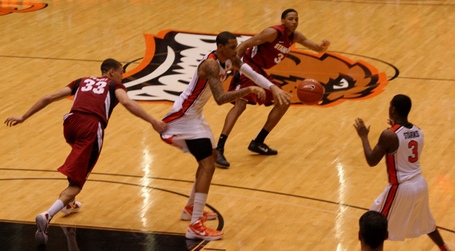 This grab was not deemed a foul.

Fortunately, the game was televised by ROOT Sports Northwest, who should have had and held a great audience for this epic. One has to wonder what would have happened had there been no video, as in Thursday's unvideoed Oregon St. game against California.

Oregon St. managed to block 11 shots, a school record, and snagged 12 steals, but still couldn't take control of the game, which featured 13 lead changes, all in the last 29 of the 60 minutes.

The Cardinal only shot 57% from the free throw line, and while the Beavers made 27 of 37 from the line, a respectable 73%, most of the misses came with the game on the line.