Rate (Or Berate) Coach Riley On The 5 Beavertail Scale

Share All sharing options for: Rate (Or Berate) Coach Riley On The 5 Beavertail Scale

Now that Oregon St. has missed the post season for the second time in a row for the first time in 13 years, its time to rate Coach Mike Riley using Fanoverboard's patented 5 Beavertail system that we use after the season ends for each of the Beaver's major programs.

Just as we made the editorial decision to take Beaverbysmal off the list for Coach Pat Casey last spring, after he guided Oregon St.'s baseball team to the NCAA Super Regionals, the 5 tail Beaveriffic assessment isn't an alternative in this assessment.

When you have just finished your team's worst season in 15 years, and were non-competitive in one third of your games, especially when it's the third consecutive season of declining results, the only "iffic" adjective that can be applied is horrific.

Oregon St. finished the season with a 3-9 record, more losses than any Beaver team in 15 years, since the end of the Jerry Pettibone debacle that, ironically, led to the hiring of Riley.

7 of the losses, and 10 of the last 12 defeats dating back to last year, were by double figures. 5 of this season's defeats, including the last 4, and 8 of the last twelve were by three scores or more, some times much more. Noncompetive outings include blowout losses dating to last November by 38, 35, 28, 25, 19, and on three occasions, 17 points. 5 of those were on the road, where Oregon St. is notorious for not making a serious overall institutional effort, despite having a sizable loyal following that routinely attempts to overcome an indifferent organization.

On the rare days when Oregon St. was "competitive" in losses, that too was indicative of abysmal performances. One loss was to an FCS Sacramento St. team that posted a losing record playing a lower level of competition. The other was to a UCLA team that lost 5 games by more than 3 touchdowns, in a home game that was generally identified as the game that was as much of a must win situation as any that the Beavers would play all year.

Instead, Rich Neuheisel out-coached Riley, just as he had the year before.

Of their last five wins, all but one were over teams minus their starting quarterbacks. The fifth was over an Arizona team that was imminently going to fire their coach for the ‘Cats poor on-field performance.

The embarrassing performances have been on both sides of the line of scrimmage.

The defense, under coordinator Mark Banker, gave up 411.3 yards per game this season, 10th. in the Pac-12. The Beavers were particularly hurt by their inability to even slow opponents' rushing games, giving up 196.8 yards per game, last in the conference, and 101st nationally.

The completely unbalanced offense under coordinator Danny Langsdorf didn't help matters. Redshirt freshman quarterback Sean Mannion threw for over 200 yards in the last 11 games of the season, and finished the season with 3,328 passing yards, the third most in a single season for Oregon St. behind Derek Anderson's 2003 and 2004 seasons. In less than a full season that won't include a bowl game, Mannion is already the Beavers' 9th. all time passer.

But while Mannion put up some spectacular passing numbers, his passer rating was only 10th in the conference. And he threw 18 interceptions, one shy of worst in the country. 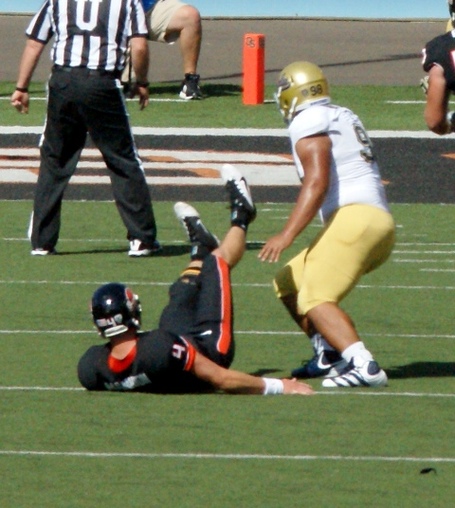 too often, resulting in numerous sacks and interceptions.

Relying on an offensive line that was undersized, and dependent on former walkons, a product of poor recruiting in prior years, was a factor in problems with the running game and pass protection.

Another failure was the team's turnover margin, -7, which was not only worst in the Pac-12, it was 102nd nationally. This despite the efforts of redshirt freshman Scott Crichton, who set a school record in fumbles forced.

Those numbers aren't just bad by comparison to BCS automatic qualifier conference competition Oregon St. is supposed to be able to be competitive against, they are worst in the business numbers. WAC and MAC conference bottom dweller bad.

So what caused this series of exercises in ineptitude?

A lack of depth in the face of injuries, and a team that resorted to youth on a record level.

The season ending loss of senior CB Brandon Hardin before the season got going, and season long struggles with lingering health problems never adequately addressed in the offseason for WR Jordan Bishop, LB Cameron Collins, and S Lance Mitchell hurt the team in terms of both performance and leadership.

With only one "big" defensive tackle on the roster, the loss by midseason of Castro Masaniai effectively ended any hope of ever being able to stop any opponent with a competent inside rushing game.

Despite being cleared after two off-season knee surgeries, WR James Rodgers was held out of action until the 4th week of the season, as was TE Joe Halahuni, whose' shoulder injury from last year wasn't adequately addressed until the end of spring ball, delaying his recovery window. RB Jordan Jenkins was also slowed by a similar slow diagnosis. 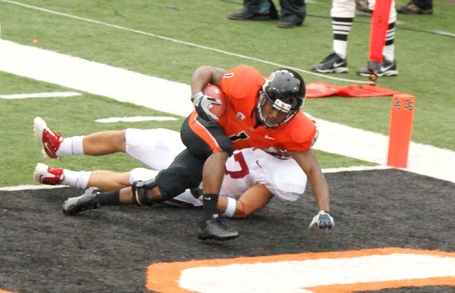 But Rodgers was often overlooked and underutilized in the Oregon St. offense.

These problems further exacerbated what was going to be a serious inexperience issue anyway, and resulted in over 20 first time starters playing for Oregon St., a result of generally failed recruiting at some positions immediately before the current crop came to Corvallis.

A rash of injuries that depleated and disrupted the continuity of the line backing group only distracted attention from continuing scheme deficiencies that have made for career highlight days for any offense with a mobile quarterback. 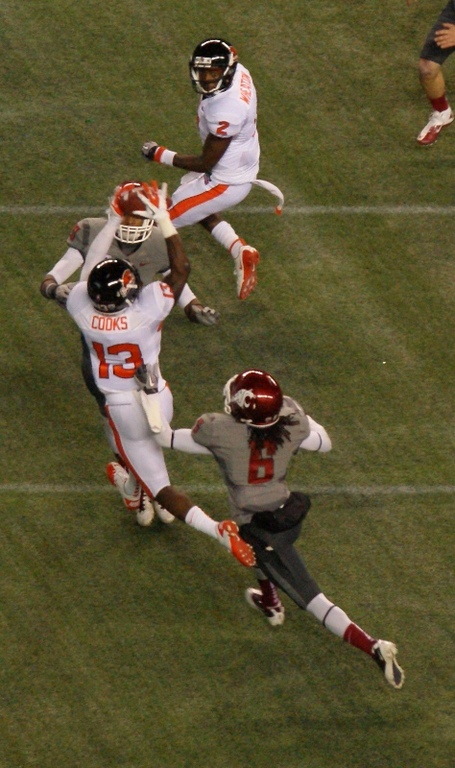 While newcomers like WR Brandin Cooks, above, and DE Dylan Wynn, as well as Crichton, played well all season, there were both physical and experience mismatches to be capitalized on for opponents all season.

Apologists on the Oregon St. payroll tried repeatedly to dismiss the concern an increasing number of long time Beaver supporters held about the program returning to the dark ages of incompetence that resulted in 28 consecutive years of losing football, frequently citing individual bright performances in overall embarrassing outings.

The downturn would be brief, because things are not the same as they were then. And after all, its tough to recruit to small towns, like Corvallis.

Never mind that it has been demonstrated that it is possible to recruit well enough to regularly contend for BCS bowl appearances and top 10 rankings, in both AQ and non-AQ conferences, in anything but glamorous small city destinations like Blacksburg, VA, and Boise, ID.

The reality is things are exactly the same as they were back in the dark ages. There were always some good players, and some good performances, even in the worst of those losing seasons. There were a sprinkling of players who went on to pro careers, an all-conference player here, or a highlight of the week play there. But then as now, there was never enough quality or depth in support of those few players and plays to finish very many games that had competitive stretches, or be able to compete on a regular basis.

The last 5 wins have all been by double digit margins, a bizarre and extreme set of exceptions sprinkled through a series of mostly similar sized blowout losses.

These rare glimpses of what the team and players are actually capable of at once give hope and bring frustration to supporters who have been witness in recent times to the increasingly bipolar behavior of the Beavers, who have now moved on to displaying clinical signs of schizophrenia.

Schizophrenia is defined as a mental disorder characterized by a disintegration of thought processes and of emotional responsiveness. It most commonly manifests as bizarre delusions, or disorganized thinking, and it is accompanied by significant social or occupational dysfunction.

The gradual but steady decline in productivity over the last 5 years by Oregon St. on the football field wasn't initially seen as anything that couldn't be corrected, in large part because the Beavers were still winning most of the time. Further, when they did lose, they were often competitive, and even when they weren't, it was an isolated incident. It wasn't long before they bounced back. And the losses were mostly against very tough opponents, often under adverse conditions.

That changed midway last year, and Oregon St. has quickly slipped from being a top 25 contender, one who twice played for the conference title and a Rose Bowl trip as recently as 2008 and 2009, and was ranked midseason last year, until a coaching miscue on the shores of Montlake that Riley admitted to being the single coaching decision he would most like to have to do over, into a bottom 25 team.

A year ago, despite collapsing down the stretch for the second year in a row, Riley received an above Beaverage rating by 48% of BTD readers, and only 22% pegged his performance as somewhere below Beaverage.

The reason was the promise of having a mobile returning quarterback in Ryan Katz that analysts nationwide viewed as one of the bright prospects in the conference, one with the tools to become a pro, and an array of receivers the like of which had rarely been seen at Oregon St.

Despite the early departure of Jacquizz Rodgers, the message from the Valley Football Center was that last year was a temporary downturn, and a return to bowl contention was a certainty. Instead, Oregon St. was eliminated from any chance at a bowl game prior to the completion of the final game of the year for the first time since 1998, Riley's second season as head coach.

And instead of further developing Katz, Riley benched him after a slow start against Sacramento St. Against Wisconsin, Katz was pulled after 3 all productive plays, and Mannion was anointed the quarterback of the future.

So much so was Riley enamored with Mannion that after that, not only was Katz never allowed to see the field, even in the face of terrible early performances at Utah, California, and Oregon, even Cody Vaz was never given a snap, just to see if there was any chance to salvage a game, in a season Riley had long since written off.

Katz, who will graduate after winter term, will transfer, and be eligible to play next season for any FBS team outside the Pac-12. It leaves the Beavers with no experience behind Mannion in the event anything happens to him.

Preseason preparation was again totally inadequate, as Oregon St. went 0-4 through Oct. 1, and they never recovered. The Beavers are 1-15 on the road under Riley, and 19-24 overall, in games played before October. Only once has Riley ever posted a winning record in those early games.

Riley has promised a "long, hard look at the situation," and said he would be realistic, and not look at it with rose-colored glasses. But he has not given any indication that he feels there is any problem with his staff. And despite being thoroughly outplayed by Oregon as the Beavers lost their fourth consecutive Civil War, Riley said "We may not be that far away."

Banker admits to not returning phone calls on Sunday, and laughing at those who leave messages, supposedly because no one else knows anything.

Perhaps its time to reread that definition above of schizophrenia.

Is this analysis being too tough on Riley, who, to be fair, had resuscitated an Oregon St. program on life support, given the team their longest run of success in decades, and is a man of outstanding character?

Is yet another opportunity to turn the program around warranted? If so, based on what?

Why should Oregon St. settle for poorer performance than has gotten other experienced coaches, like Dennis Erickson, fired today despite getting Arizona St. to a bowl game, but after a season where opportunities were not realized?