Share All sharing options for: Beavers "Coug" It, Losing CBI Semifinal To Cougs

Washington St. games are always "interesting", if not necessarily artistic, and the CBI semifinal tonight in Corvallis was certainly no exception. On the first full day of spring, the most significant snow storm to strike the Willamette valley in several years served to keep the crowd down to only 2,190, but should have made the Cougars feel right at home.

And when Washington St.'s Brock Motum made the first 2 baskets of the game, it looked like it might be another long night for Oregon St. But immediately after that, there was a turn of events that doubtless left even ardent Cougar fans fearing it would be their season that would shortly come to an end.

Motum got tangled up in traffic, went down, and stayed down until being carried off the court. Motum was taken to the hospital in Corvallis for x-rays on his right ankle.

The Cougars seemed to rally around each other after that, though, and shot 52% from the field in the first half.

Motum wasn't the only one those who did come out on the snowy night expected to see and didn't, however.

Beavers guard Ahmad Starks took ill before the game, and was unable to play.

"We don't know if it was food poisoning or the flu, or what," Oregon St. head coach Craig Robinson explained. "They (Washington St.) seemed to respond well to losing their best player, with everyone stepping up, while we were never able to get into rhythm. It seemed to help them and hurt us."

So while the Cougars were shooting well, the Beavers weren't, and Washington St. led wire to wire.

It took most of the first half for Washington St. to start to open a very large margin, but the Cougars did open 3 different 10 points leads in the last couple minutes before halftime, including a 39-29 lead at the break, as Abe Lodwick, who would finish with a game and career high 23 points, and a game high 12 rebounds, made 3 3 pointers. 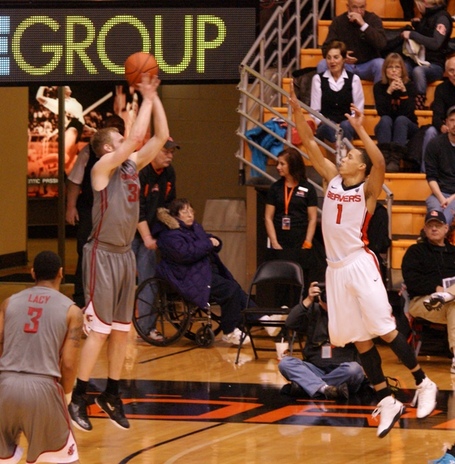 Everyone expected Washington St. to get a big game from one of their "slow white guys",

but no one expected it to be this one! Notice any problem with the defensive spacing

Abe Lodwick is (not) having to overcome to get his shot off?

While Lodwick was on his way to his best night ever, Oregon St.'s Jared Cunningham was struggling, and only had 7 points at the half. Cunningham finished what may be his last game as a Beaver if the junior should decide to enter the NBA draft with only 13 points.

Oregon St. never got closer than 9 points the rest of the way, and after Joe Burton's layup made it 51-42 with 13:15 left, Washington St. went on a 9-0 run to open their largest lead of the game.

The Beavers battled back within 60-49 on a Cunningham dunk, but Reggie Moore, who finished with 22 points, and Lodwick went to work and quelled any thoughts of a comeback.

Lodwick's 5th 3 pointer of the game opened a 16 point lead with about 5 minutes left, and he hit a pair of free throws with just under 4 minutes left to push the Cougars' lead to 17.

Layups by Mike Ladd and Moore kept that the margin to the end. 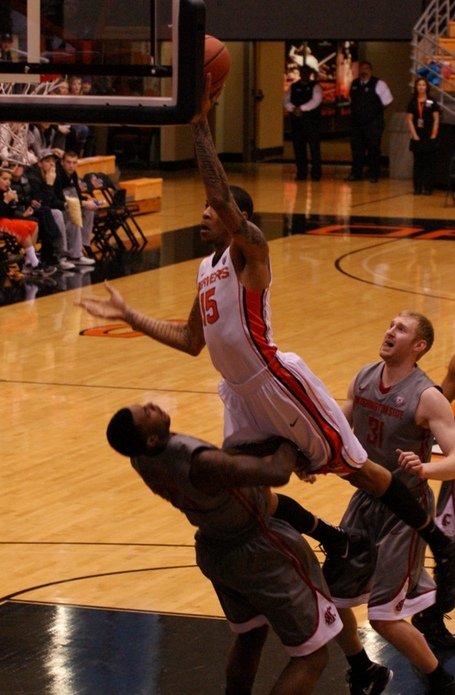 Eric Moreland, above, was the only Beaver to have a good game, with a career and team high 14 points, and a team high 11 rebounds, giving him his third career double double. Moreland also had a blocked shot, giving him the Oregon St. single season record with 69. passing Scott Haskin.

Several text-book mistakes by the Conference USA crew, which was a definite step down from the officiating seen in previous post season games, contributed to the problem, but Oregon St.'s season long problem of weak side non-defense, allowing uncontested 3 pointers, which aided Washington St. to shoot 53% on 3s, and rebounds and putbacks from the weak side, was the biggest factor in the Beavers never being able to wrest control from the Cougars.

Still, the 21-15 record still represented the most wins and fewest losses for Oregon St. in 22 years.

And even though the Beavers didn't win, Jacquizz Rodgers, who was back in town, seemed to enjoy watching the action.