Share All sharing options for: Creekmur’s Shooting Leaves Beavers Up A Creek

Arizona St.'s Chanse Creekmur shooting left Oregon St.'s Beavers up a creek without a paddle, or a prayer of making a game of it Saturday night in Tempe. Creekmur made 8 of the 9 shots he tossed up, including a career high 6 of 7 from 3 point range, and his game high 24 points, which was also a career scoring high, hoisted the Sun Devils to a 10 point win, their first on their home floor in over a month, since a 3 point win over North Dakota St. on Dec. 10.

Creekmur's shooting was the cornerstone of an overall lights out shooting display by Arizona St., as the Sun Devils shot 53% on 3 pointers, and 60% overall.

Oregon St. coach Craig Robinson re-inserted Devon Collier into the starting lineup, and it was the one move that worked well for the Beavers. Collier led the Beavers with 21 points, including 7 of 9 at the free throw line.

But the Beavers got essentially nothing else from their front court. Joe Burton didn't start, but was the first sub into the game, and played the same amount of minutes as Eric Moreland. Unfortunately for Oregon St., Burton had only 2 points, and Moreland was shut out. They also had only 5 rebounds, 2 steals, 2 blocks, and 1 assist between them. Angus Brandt was ineffective as well, with only 2 points and 2 rebounds on the night.

Despite playing only their second game since leading scorer Keala King was dismissed from the team by Arizona St. coach Herb Sendek, the Sun Devils still lead the majority of the game.

Kyle Cain came off the Sun Devil bench to hit 8 of 13 shots, and finished with 16 points, and Ruslan Pateev put 5 of 6 shots down, for 10 points for the Sun Devils.

Oregon St. experienced another slow start, not scoring from the field for nearly 4 minutes, missing their first 5 3 pointers, and making only 2 of their first 13 shots.

Fortunately for the Beavers, Sendek's slow-paced Sun Devils couldn't pull away from a team of turtles, and they caught up, taking a 30-29 lead 1:23 before halftime on a Collier basket.

Oregon St. took their largest lead of the game, 3 points, on a steal and dunk by Jared Cunningham, and then again on an Ahmad Starks jumper that put the Beavers up 34-31 at halftime. 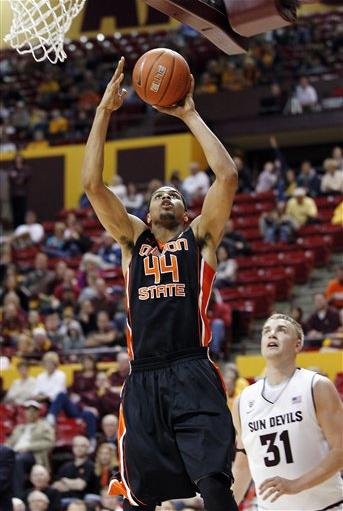 Creekmur and Trent Lockett scored to start the second half, and retake the lead for Arizona St. Collier answered with a basket and a free throw, and after Creekmur made a 3 pointer, a Cunningham dunk gave Oregon St. their last lead of the evening, 39-38 with 17 and a half minutes to go.

Carrick Felix, who was largely a non-factor, and scored only 6 points, got half of them on a 3 pointer that put the Sun Devils ahead for good, and Creekmur drilled another 3 pointer.

Fortunately, few fans were in the almost empty Wells Fargo Arena to see the underwhelming basketball that characterized much of the second half.

Unfortunately for Oregon St., the Beavers suffered additional scoring droughts, one of over 2 minutes, and another just seconds short of 2 minutes in duration. Still, they never fell behind by more than 12 points, and climbed back within 7 points twice. But the Beavers' bad shooting meant they only occasionally capitalized on the 21 turnovers the Sun Devils suffered.

Starks finished with 14 points, as did Nelson, and Cunningham added 13. Cunningham also had 4 steals, and Nelson 3. Had Oregon St. not had a 10 point advantage in points off turnovers, it could have really been ugly. Despite a dozen steals, the Beavers had only 10 fast break points, as Sendek's 2-3 zone defense successfully out-defended Oregon St. which went mostly with their 1-3-1.

It was the second game in a row where an unexpected opponent had a career night shooting over the Beaver defense, as Creekmur's 24 followed a 19 point night by Arizona's Nick Johnson.

Arizona St. improved to 5-11, and 2-3 in the Pac-12. Oregon St. lost their third game in a row, and fifth of six, dropping to 11-7 for the season, and a tie for last place in the Pac-12 with USC, pending the Trojans' game tomorrow against UCLA.

The Beavers return home to face the Bruins Thursday night at 7:30 PM, with ROOT Sports Northwest televising the contest.