Arizona Scratches Out OT Win As Oregon St. Mismanages Another End Of Game

Share All sharing options for: Arizona Scratches Out OT Win As Oregon St. Mismanages Another End Of Game

It looked and felt like Oregon St. was going to overcome Arizona after Ahmad Starks made back to back baskets to wipe out a 5 point Wildcat lead late in the game, which were wrapped around his stopping a 4 on 1 Arizona break, and then made the baskets that opened a one, and then a two point lead, with 32 seconds left.

Kyle Fogg's layin tied the game again at 72-72 with 12 seconds left, but the Beavers had the ball and 2 timeouts, needing only a single point to put the game away. However, yet another episode of end of game mismanagement, something that happened time and again in Oregon St.'s 4 overtime 103-101 loss to Stanford last Saturday, occurred.

For whatever reason, Oregon St. coach Craig Robinson left his multiple remaining time outs on the board, and the Beavers, instead of attempting to get a higher percentage 2 point shot, or draw a foul, settled for a 3 pointer. And it came too late to get a rebound or putback.

Starks, who had made Oregon St.'s last 10 points, but had hit only one shot from the field all night before his one-man rally, hoisted a three pointer that rattled out, and the Beavers were facing overtime once again.

This time, it didn't take long at all for Oregon St. to squander the opportunity to get a quality win, as missed shots and turnovers essentially ended the contest before a bench clearing brawl marred what had been a competitive contest in Tucson.

Back to back baskets by Nick Johnson and Fogg had opened a 6 point, 79-73 Arizona lead with 1:15 left, before Fogg decided to trash talk and shove Oregon St.'s Jared Cunningham, who had drawn a foul on the basket.

It triggered a brawl that took several minutes to stop, and then partially sort out by the officials.

A couple of Arizona free throws and several more Oregon St. misses later, the ‘Cats had scratched out the 81-73 win over the Beavers in front of a crowd of over 14,000 at the McKale Center.

Surprisingly, the Cats' Soloman Hill escaped the mele without sanction, despite the shove that escalated the incident from a confrontation between Fogg and Cunningham into a free for all, and also throwing a punch. Whether subsequent review of video will result in additional penalties remains to be seen.

The game started out with another slow Oregon St. start, as the Beavers fell behind 5-0. An Eric Moreland blocked shot that led to a Cunningham dunk seemed to get the Beavers started, but Fogg fired in a pair of 3 pointers, and the ‘Cats opened the lead to 14-7.

Arizona's outside shooting cooled off though, and an 11-3 Oregon St. run turned the game around, opening a 28-23 lead for the Beavers. Johnson made one of his 3 3 pointers to make it a 28-26 game at halftime.

It's not unusual for 3 point shooting to be the story of the game, nor is it uncommon for foul trouble to be a central factor in the contest, but it is fairly unusual for both to happen. It did in this contest, though.

Oregon St.'s Angus Brandt picked up his third personal foul early in the second half, and less than 5 minutes into the period, Moreland, Kevin McShane, and Roberto Nelson all had their third fouls as well. Hill and Fogg reached the same point shortly thereafter, and Hill picked up his 4th. foul before the midway mark in the second half, yet did not foul out, despite playing 38 minutes, more than anyone except Cunningham.

Cunningham wrapped a pair of 3 pointers around one by Fogg, but the Beavers never opened more than a 5 point lead, which came on a Devon Collier free throw 7 minutes into the second half.

Brendon Lavender got red hot from outside, hitting 4 three pointers, and Johnson got in on the outside shooting show as well, eclipsing the 4 of 6 from behind the arc Cunningham had connected on earlier.

Both Brandt and Nelson picked up their 4th fouls just before a pair of Fogg free throws opened a 62-56 Arizona lead with 5:40 left. It was the largest lead of the game, other than the anticlimactic, post brawl 8 point margin at the end of overtime. 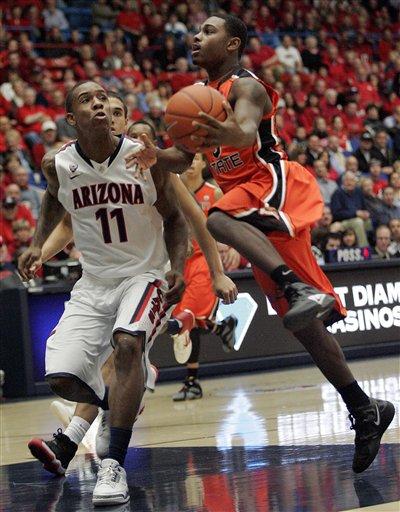 Beavers in position to win the game, but missed a 3 pointer, and the game

The last of Lavender's 5 three pointers made it 67-62 ‘Cats with 3:32 left, setting the stage for Starks' late game heroics, which set the stage for what could have been the Beavers' second win in Tucson in 3 years, after a 16 year losing streak, had sound strategy been employed at the end of regulation.

Starks' 10 point burst gave him 14 for the game, and Collier connected on 4 of 6 shots, and finished with 11 points. Moreland had another solid overall game, with a game high 10 rebounds, 6 points, 3 assists, 2 steals, and 2 blocked shots.

Oregon St. shot 35% from three point range, but they couldn't have been much different after the half than before. The Beavers made only 2 of 10 outside shots before the break, but hit 5 of 7, 71%, in the second half. The Beavers were also under 40% overall for the game, but heated up from 31% in the first half with 64% shooting in the second half.

The terrible start would prove to be just too much to overcome, even though Arizona had a similar cold start, shooting only 32% despite shooting 3 pointers better than they shot overall. The ‘Cats killed it from outside in the second half, hitting 7 of 9, 78%.

Oregon St.'s defense continued to struggle at times, often double teaming the ball, which left open Arizona shooters for often unchallenged three pointers. And despite having a substantial size advantage inside, the Beavers had trouble exploiting the advantage, and only had a 4 point advantage in the paint.

Both defensive and offensive strategy and execution could have been better.

Oregon St. did have a 15-3 edge in points off turnovers, significant given they only had a +2 advantage in turnovers.