Oregon capitalized on a series of Oregon St. miscues and red hot outside shooting early, and then the Ducks held off a Beaver rally with stellar free throw shooting down the stretch to claim a 10 point win in the 341st Civil War Sunday afternoon.

It was a scoring match early, with Oregon taking a slight 11-10 advantage, but then what would turn out to be the decisive stretch of the game unfolded.

Flying in on fresh wings after a week long layoff, the Ducks capitalized on 4 consecutive Beaver turnovers to knock down 4 consecutive 3 pointers, by 3 different sharp shooters. The first 2 by Mike Moser gave him 3 in the game in a matter of 5 minutes.

Devon Collier would miss a pair of free throws, and Jason Calliste added another 3 pointer. Malcolm Duvivier's basket finally ended the 17-0 Oregon run, but another turnover resulted in another Calliste 3 pointer, and a 19 point 31-12 lead, which would turn out to be the largest of the game, before Dominic Artis finally missed, ending a run of 6 consecutive made 3 pointers.

It had the Beavers run out of Matthew Knight Arena, but the Ducks couldn't quite drive them onto Franklin Boulevard, and Oregon St. would fight back.

It's not as though the Beavers were playing that poorly; they were shooting 55% from the field, and would only commit 9 turnovers all game long; its just that the Ducks had capitalized totally on the one bad stretch.

"You just can't spot a team a 19 point lead," Oregon St. head coach Craig Robinson said, "especially one that is as good a shooting team as Oregon is."

Langston Morris-Walker's 3 got the deficit back into single digits with 5 1/2 minutes left, and a steal and layup by Roberto Nelson made for a 7-0 Oregon St. run in a minute, and forced an Oregon time out.

Oregon St. stormed out of the locker room with an 8-2 run to cut the deficit to 4 points, making the crowd of 10,013 mostly Duck fans nervous, but Moser answered with a 3 pointer to start a 5 point run. 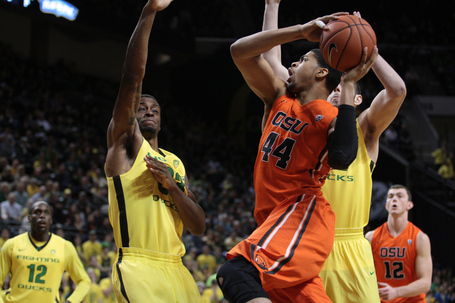 Collier re-sparked the Oregon St. rally, with the play of the game, above, forcing back up a basket for a 2 + 1 after Elgin Cook had blocked the shot, and Angus Brandt got a steal, and made back to back baskets to make it 60-56, pulling the Beavers within 4 points again.

Damyean Dotson answered with a 2 + 1, but Brandt fired a length of the court pass to Duvivier for a layin that made it a 5 point game, and forced an Oregon time out with still 9 minutes to go.

Hallice Cooke's free throws cut the deficit to 2 points a second time, making it 72-70 with still more than 5 minutes left, but the Beaver's then ran into another tough stretch.

A bad foul call on Moreland on a rebound led to a pair of Moser free throws, and a good call on a charge by Nelson cost Oregon St. another possession.

But the Ducks went on a 5-0 free throw run, and forced the Beavers to foul to extend the game.

Cooke hit another 3 pointer, but in all the Ducks knocked down 12 of 14 free throws down the stretch to close out the 10 point win.

"Every time we would get close, to their credit, they would answer," Robinson said of Oregon.

Young finished with a well balanced game high 25 points, 11 in the first half, and 14 after the break.

Nelson led Oregon St., with 18, which put him above 500 points for the second season in a row. Nelson is the first Beaver with back to back 500 point seasons since Gary Payton. 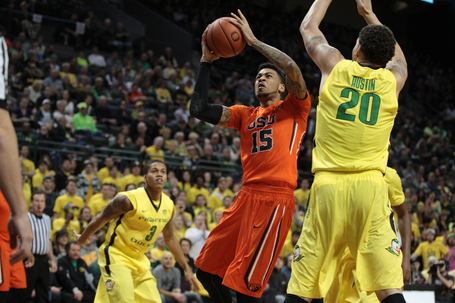 Moreland had his best game since the win over Stanford, with a 17 point 10 rebound double double. Cooke added 16, but 14 of those came in the second half, as the Oregon St. point guard got off to a slow start. Brandt was also in double digits, with 11 points.

Both Mosier and Dotson had 15 point afternoons for Oregon, and Jonathan Loyd added 11. Calliste had 14 off the bench, on 4 of 6 3 point shooting, matching Moser.