Share All sharing options for: #2 Arizona Runs Past Oregon St.

Oregon St. head coach Craig Robinson felt going into Sunday evening's game against second ranked Arizona that the Beavers would have to limit the 'Cats' runs. He meant the size of them. And while for most of the game, Oregon St. was able to do that, they weren't able to limit the shear number of them, or make hardly any of their own. The result was an easy 22 point win for the Wildcats in front of a capacity crowd of 14,545 at the McKale Center.

Arizona's first run was a simple 7-2 one, after Langston Morris-Walker's only made basket of the game, a 3 pointer, had put Oregon St. ahead 16-14. It would be the last lead the Beavers would enjoy.

Then, starting with just over 5 minutes left in the first half, the 'Cats made a 6-0 run in about 2 minutes, and prompting Robinson into a timeout with a media timeout pending.

The timeout was briefly effective, as Angus Brandt's 2 + 1 pulled the Beavers back within 4 points, but another 6-0 run opened the 'Cats' first double digit lead of the game, making it 37-27 at half time. 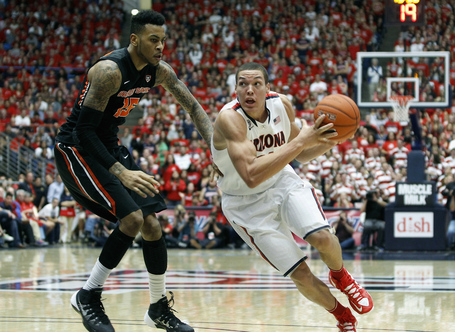 Oregon St. wrapped an Eric Moreland basket and Brandt's second 3 pointer of the game around Aaron Gordon's basket, but Arizona then went on a 6-1 run that forced another timeout just past the midway mark of the second half.

This one wasn't effective though, and the run became the first "big" one, eventually growing to 11-3, which made it 58-39. The 19 point lead was Arizona's largest to that point.

After an exchange that made it 60-41, Oregon St. finally made a 5-0 run of their own, capped by Hallice Cooke's first 3 point basket of the evening. Trouble for the Beavers was, it didn't come until there was only 6:10 left in the game, was also his last one, and for that matter, was Oregon St.'s last field goal of the game.

Arizona coach Sean Miller took an immediate time out, and the 'Cats answered with another 5-0 run to offset it, and effectively end the game.

Nelson made a pair of free throws twice, but the last pair came with 3:47 left, and the Beavers wouldn't score again until Malcolm Duvivier made a pair with 25 seconds left.

Rondae Hollis-Jefferson's steal and dunk with 2 minutes left made it a 20 point game, and put the 'Cats up 72-52, affording Miller the luxury of clearing his bench, something quite unusual since Miller has had to shorten his rotation to 7 players after Brandon Ashley suffered a season ending foot injury early in last weekend's California game, Arizona's only loss of the season.

The largest lead of the game was 24, before Duvivier's late free throws made the final 76-54.

Gordon led a balanced Arizona attack, with 17 points, with Hollis-Jefferson right behind, with 16. T.J. McCoannel added 11 and Nick Johnson 10, and Tarczewski had 8, and led the 'Cats on the boards, with 7.

Brandt led Oregon St., with 14 points, but Roberto Nelson, the Pac-12's leading scorer, was held to just 10 points. In what has been a trend of late, Nelson struggled early, and had only 4 points in the first half. But unlike against UCLA and Arizona St., a big second half did not follow. 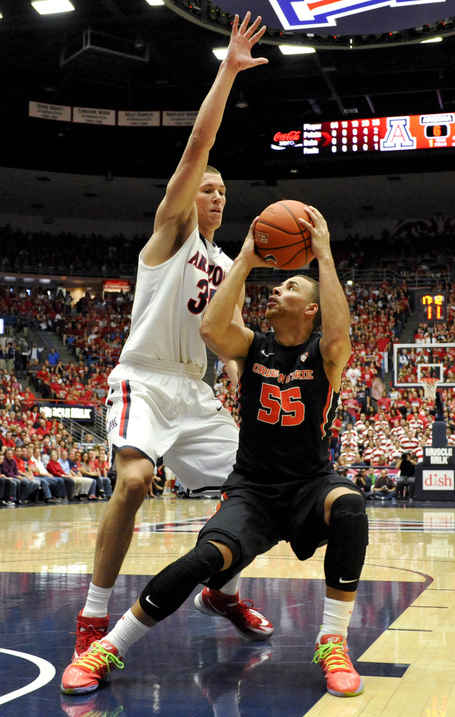 Devon Collier was also in double figures, with 10 points off the Oregon St. bench, but Moreland was again an offensive non-factor, as Arizona held him to just 4 points, though he did grab a game high 8 rebounds.

Trouble for Oregon St. was no one else grabbed many.

The Beavers spent a lot of time in their 1-3-1 zone, but that often effective unusual look backfired in a big way against the 'Cats.

The 1-3-1 doesn't lend itself to rebounding, and Oregon St. who had only been out-rebounded once previously in conference play, was beaten badly on the boards, as the 'Cats clawed out a 39-24 edge.

"I'm going to take the blame for this game because it's been awhile since we have played a game like this," Robinson said. "This one is on me, but I'm trying to keep that locker room up, because we have a lot of basketball left to play, and have more games to play that are winnable."

The win capped a great day for 'Cat fans, as the game was the conclusion of a double header, and the Arizona women's team upset their rivals, #11 Arizona St., 68-49 in the day's first game.

Both teams have road rivalry games up next, with Arizona visiting Arizona St. Friday evening, and Oregon St. traveling to Oregon next Sunday to meet the Ducks at noon.