Share All sharing options for: #20 Colorado Pulls Out Close Win Over Oregon St.

Oregon St. and 20th ranked Colorado put on another battle of runs reminiscent of last years' trio of tight games, and it was once again a game that saw a lot of exchanges of runs. Down the stretch, the Buffs missed their last 3 free throws, but before that, they hit 10 of 11, and it kept the Beavers at arms length, sending the large and loud crowd of 9,851 almost exclusively Buff fans home happy with the win in the Pac-12 Conference campaign opener for both teams.

Oregon St. made the first of many runs, scoring 7 straight points after Colorado had taken a 5-3 lead, but the Buffs responded with a 5-0 spurt that turned into a 13-3 run to go up 16-8.

The Beavers responded with their own 10-2 run, tieing it at 18 apiece on Malcolm Duvivier's 3 pointer 5 1/2 minutes before half time.

The game marked the early return from a suspension for unspecified repeat violations of unspecified team rules by forward Eric Moreland, and he made an impact early. After entering 3 1/2 minutes into the game, Moreland grabbed 6 rebounds in 7 minutes, on his way to 8 in the first half. 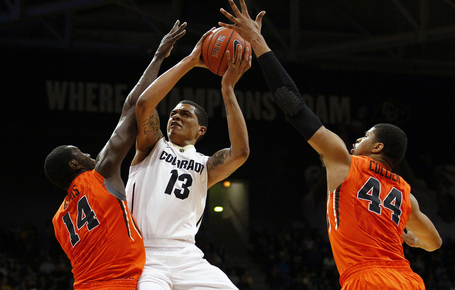 Speaking of bench play, Colorado also got a boost, from Jason Hopkins, above, scoring against a double team by Daniel Gomis and Devon Collier. (Photo via cdn0.sbnation.com) Hopkins was the only player to reach double digits scoring in the first half, with 10 points.

Oregon St. struggled to get their offense in gear early, as head coach Craig Robinson went 12 deep, and used 2 first half timeouts, in an effort to counter both playing at elevation and Colorado's pace, but they did take a 21-20 lead 3:25 before halftime on a 3 pointer by Roberto Nelson.

But any opportunity to take control of the game got away along with the ball when Oregon St. committed 11 turnovers in the first half.

"You can not win against a ranked team on the road if you make that many mistakes," Robinson admitted.

Colorado closed the half with an 8-2 run, capped by Josh Scott's "Alley-Oop" dunk less than 4 seconds before the buzzer.

Nelson led the Beavers in the first half, with 7 points, and Devon Collier added 6, but Angus Brandt, who struggled to get into the flow all night, had only 2 points. Brandt would finish with only 4 on the night.

Askia Booker provided most of the support for Hopkins, with 7 points, as Colorado ace Spencer Dinwiddie had only 3 points in the first half, having hit only 1 of 4 3 pointers. It was symptomatic of the Buffs' scoring struggles, as they hit only 4 of 13 3s, while Oregon St. hit 3 of 4.

The Buffs stormed out of the locker room, as Scott wrapped 2 baskets around another 3 by Nelson, and Dinwiddie answered a Collier basket with his second 3 pointer of the night.

Colorado took the first double digit lead of the game 3 1/2 minutes into the second half, on Scott's putback, as the Buffs 10-5 start made it an 18-7 run in 6 minutes dating back to Nelson's 3 pointer that had put the Beavers ahead.

But just as it looked like Oregon St. might be about to get blown out, the Beavers bounced back out of the first media timeout of the second half, with a 7-0 burst that eventually grew into a 12-2 run to tie the game again at 40 apiece, on 4 straight Nelson free throws.

The Beavers were poised to get the ball back on Colorado's next trip down the floor after a missed three-point attempt by Dinwiddie, but a phantom foul (seen below) was whistled on Langston Morris-Walker going for the rebound. The possession would eventually end on a third field goal attempt, this one slammed home by Xavier Johnson, giving the Buffaloes a lead they would never relinquish.

Oregon St.'s problem was an inability to get a reliable inside scoring threat going. At that point, the Beavers were 6 of 9 on 3 pointers, but only 8 of 29 inside the 3 point arc.

Nelson nailed another 3 pointer, the 10th straight Oregon St. point for him, but a 5-0 Colorado run opened their advantage to 58-46, which was the largest lead of the game.

Dinwiddie picked up his 4th foul of the game with over 3 minutes to go though, and Oregon St. made one more charge. Another 3 pointer by Duvivier capped a 10-2 run by the Beavers, cutting the deficit to 4 points, and forcing Colorado coach Tad Boyle to take a timeout with 2:10 left to steady the Buffs.

With 1 1/2 minutes to go, the turning point of the game came, and it came after Hallice Cooke missed a 3 pointer that would have made it a 2 point game. Moreland grabbed the offensive rebound, but Johnson got a hand in and knocked the ball out of bounds. The ball was awarded to Colorado though.

After a lengthy video review, the Pac-12 officiating crew elected to not correct their call, and Colorado went to work on the clock. After working the shot clock all the way down to the buzzer, Booker missed a wild 3 pointer, but Xavier Talton ran down the rebound that went almost to mid-court. 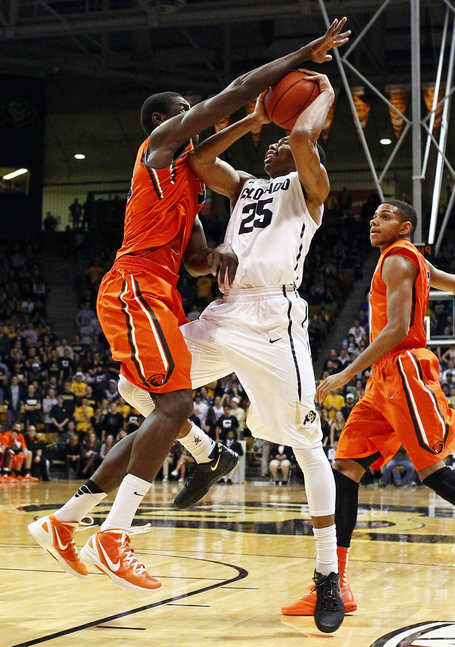 Gomis took the foul, above (via cdn3.sbnation.com), and Dinwiddie sank both free throws to make it a 3 possession, 7 point game, putting the Buffs up 63-56 with 41.2 seconds left.

Nelson took a too long 3 pointer from well beyond NBA range and Olaf Schaftenaar took a too flat 3 pointer, and the Beavers would go over 2 minutes without scoring down the stretch before Nelson sank 2 free throws with 5 seconds left to make the final score 64-58.

Nelson, the Pac-12 Player of the Week last week, and the conference's leading scorer, finished with a game high 23 points, but was the only Beaver in double figures. Oregon St. finished having shot just 18 of 38 from the field, just 37.5%, despite making 8 of 15 3 pointers, 53%.

The Beavers also out-rebounded the Buffs 37-34, though Colorado did recover after being out-boarded by the Beavers 30-18 in the first half. Moreland shared game high rebounding honors with Scott, both of whom had 10 boards. However, Moreland only had 2 points in his return. Boyle's halftime adjustments considerably curtailed Moreland.

The Buffs got much better balanced scoring, with Scott, who had the only double double of the night, Booker, and Hopkins all posting 13 point nights. Colorado needed it, as Dinwiddie, their leading scorer, was held to just 9 points, his second lowest total of the season.

Colorado improved to 12-2, and will host #10 Oregon Sunday afternoon, in the game of the week in the conference. The unbeaten Ducks improved to 13-0 after pulling out a 70-68 win at Utah tonight, when Damyean Dotson stole the ball and went the length of the floor for the game winning dunk with 1 second left in overtime.

Oregon St. dropped to 8-5. It was the 35 loss in the Beavers' last 36 games against ranked opponents, and their 7th loss in 8 games at Colorado. Oregon St. hasn't won a road game against a ranked opponent since January of 1985.

The Beavers will stop off in Salt Lake City on their way back to Oregon to play Utah Saturday afternoon at 2 PM MST (1 PM PST). The Utes (11-2), are 2 baskets away from being perfect this season, with their other loss being by 2 points at Boise St.