Washington Eats Up Oregon St. Inside For 87-81 Win

Share All sharing options for: Washington Eats Up Oregon St. Inside For 87-81 Win

Washington completed a weekend sweep of the visitors from the state of Oregon with an 87-81 win over Oregon St., and the Huskies did it by beating the bigger Beavers inside.

There's an oft repeated notion that Washington coach Lorenzo Romar isn't really a very good coach, even though once again, he's got the Huskies in the hunt headed for the latter part of the Pac-12 campaign. The theory is that Romar just rolls the balls out and has his guys go play play-ground ball, a series of 1 on 1 shoot out sequences, and that they are undisciplined. Uh-huh.

Against a taller Oregon St. lineup, Romar went with 4 guards in the starting lineup, and played almost totally with at least 3 guards. A formula for a jump shooting show by Washington.

The Huskies claimed their 11th consecutive win at home over the Beavers with an inside game plan, and the discipline to see it through despite runs on both sides of halftime that put Washington down a dozen points shortly after the break, and stay with it when Oregon St. made a 10-2 run late in the game to make it a 1 possession game after Washington had taken as large as an 11 point lead.

And Romar did it with a recruit he got out of the state of Oregon in Nigel Williams-Goss, who had his career best day, and despite a 31 point performance by Oregon St.'s Roberto Nelson, and a 23 point effort of the Beaver bench by Devon Collier.

The highlight play of the first 1/3 of the game was Eric Moreland's 1 hand block and grab, followed by his near length of the court drive, culminated by an assist to Angus Brandt who was filling the lane on the break.

But highlights aside, Washington's first 7 baskets, and 9 of their first 10, were layins, which put the Huskies up 22-20 at the under 8 media time out. And they did it without any points from C.J, Wilcox, their leading scorer to that point.

Wilcox finally broke the ice, but Oregon St. went on a 9-2 run late in the half to open a 38-29 lead with under a minute left before the break.

But a sloppy finish to the half resulted in 4 Washington free throws. After Andrew Andrews, Washington's other Oregonian plucked away by Romar in recruiting, made the first two, Nelson took the last shot too soon, and missed it, and Hallice Cooke ran into Mike Anderson 40 feet out and on the sideline with 1 second left.

Anderson buried both free throws to make it a 5 point, 38-33 game at halftime.

The itchy trigger finger was about the only thing Nelson did wrong in the first half, as he was already at 15 points, on 5 of 9 shooting. Nelson, below, was the only player in double figures at that point, though Collier was already coming up big, with 8 points off the bench. 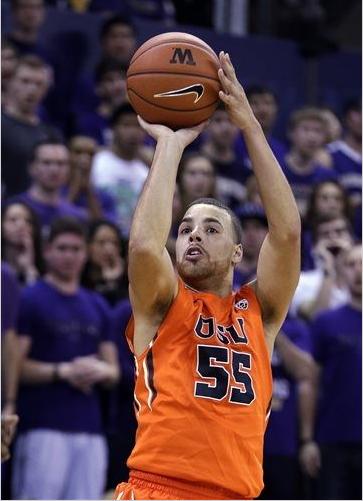 The telling stat at that point was the rebounding, though. Washington held a 13-12 edge on the boards, against an Oregon St. squad that had out-rebounded every conference opponent previously. Even more importantly, the Huskies had 6 offensive rebounds to 3 by the Beavers.

Oregon St. stormed out of the locker room with a 7-0 run, with a putback by Brandt and his only 3 pointer of the game sparking it, to open a 12 point, 45-33 lead less than 2 minutes into the second half. It would be the Beavers' biggest lead of the game, and forced Romar into an early timeout.

It was a very well spent timeout though, as the Huskes responded with a 6-0 spurt that eventually turned into 9-2 run to pull back within 5 points just 2 minutes later.

Collier again came up big off the bench, carrying the entire Oregon St. scoring load for a while, and keeping the Beavers ahead. A pair of Collier free throws made it 53-45 Oregon St. at the 14:23 mark.

But Washington responded by outscoring Oregon St. 23-5 over the next 7 minutes.

Along the way, Wilcox became just the 7th Husky in history to surpass the 1,700 point mark.

Part way through the run, most of which was done inside, as Washington's layup tally rose to 16 of their 22 baskets, and the Huskies opened their edge on the boards to 7, Oregon St. coach Craig Robinson elected to go to a 2-3 zone defense to try to close down the Huskies' inside game.

Williams-Goss promptly buried a 3 pointer to ignite the crowd of 7,112 mostly Husky partisans.

Washington was able to keep it around a 10 point margin for several minutes, with Shawn Kemp's layin, the Huskies' 19th out of 28 baskets, making it 73-63 with just over 5 minutes left.

But Williams-Goss answered with his own 2 + 1, and Nelson made only 1 of 2 free throws, which was his only miss of the day at the line.

Having made 21 of their 31 baskets, 68%, from within 5 feet, up 7 points, Andrews eschewed a dunk, opting to dribble away from the basket instead of dunking it in order to eat more time.

Williams-Goss, a freshman from Happy Valley, OR, made 2 last free throws to give him a career and game high 32 points, which is also the highest total by any Husky this season, and rendered Nelson's late 3 pointer that produced his 3rd 30+ point performance of the season immaterial to the 87-81 outcome.

Brandt was the only Beaver besides Nelson and Collier in double digits, with 11 points. Moreland had only 1 point all afternoon, though he did lead Oregon St. on the boards, with 6 rebounds. 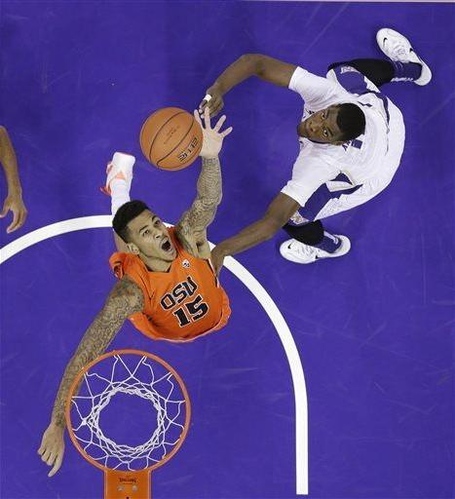 Washington's ability to win the battle on the boards was key to the Huskies' win.

Washington finished with 34 rebounds, a dozen of which were on the offensive glass, while Oregon St. had only 7 offensive boards, and 27 total.

"We did exactly what we wanted to do when we were executing well," Robinson said, "and if you would have told me that we would only have 5 turnovers against this team, I would've told you we'd have won the game. They followed the game plan, but we just came up short."

Washington improved to 13-8, and 5-3 in the Pac-12 with their weekend sweep of the state of Oregon, moving the Huskies into a tie for third in the conference. Washington only has 1 game in the next 11 days, a trip to Pullman to play Washington St. The Cougars are the only team in the conference with a losing record. The first round of the basketball Apple Cup does start a 3 game road trip, that will also include visits to Utah and Colorado, before the Huskies wrap up their season with 5 of 7 games at home.

Oregon St. was in search of their first sweep of the Washington road trip since 2002, but instead, with the loss, dropped to 11-8 for the season, and 3-4 in conference, dropping them into a tie for 8th place with Utah.

The Beavers return home for a weekend stand against the LA schools, starting with USC at 6 PM Thursday evening.