Share All sharing options for: Oregon St. Picks Up 2 Recruits 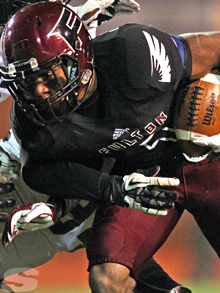 The first was Xavier Hawkins, above, from Knoxville, TN, a 5'8", 165 lb. WR somewhat in the mold of Victor Bolden and Brandin Cooks.

Here's Hawkins' senior highlight package from last fall when he was playing for the Fulton High Falcons:

Hawkins, a 2 star prospect according to Rivals.com, also had offers from several FCS schools closer to his home, Austin Peay, Campbaell College, Tennessee-Martin, and UT-Chattanooga.

Hawkins could still make another visit or two, but since his other offers are all from lower division schools, its likely only being relatively closer to home could cause him to change his mind.

Then, last evening, head Coach Mike Riley and Defensive Coordinator Mark Banker, both of whom were in Hawaii before traveling today to California, received a commitment from Lamone Williams in the Williams family living room in Kahuku, Hawaii.

Williams is a 6'3", 245 lb. DE, and his commitment not only helps fill out the defensive front line, with DT Kalani Vakameilalo and LB Fitou Fisiiahi, it gives Oregon St. 3 of the top 5 recruits in the state of Hawaii this year.

Williams, a 3 star d-line prospect according to both Scout.com and Rivals.com, is an especially important "get" in light of the decommitment of Shane Bowman from Bellevue, WA, on Monday.

Here's his highlights from his junior year playing for the Kahuku, HI, Red Raiders:

Coach Riley is now on to California to look to round out the recruiting class.