Oregon St. built a sizable first half lead, as they have done before in recent games, but this time they withstood scoring droughts in both halves and several opponent's rallies to pull out the 8 point, 80-72 win in the 340th battle of the Civil War, the most contested rivalry in college basketball.

Free throw shooting would prove to be one of the keys, as expected, but free throw shooting by Eric Moreland being the biggest part of that wasn't. Oregon St. made 27 of 31 free throws (87%), more than Oregon even took, and it was Moreland, who entered the game shooting 47% from the field over the first 4 games of the Pac-12 campaign, and his season, but made 11 of 12 on the night.

Rebounding was also a factor, also expected, and in this case, Moreland was also the biggest factor, and that was expected. Moreland had a game high 13 rebounds, giving him a  double double with his 15 points.

The Beavers didn't go wire to wire, as the Ducks' Mike Moser had the initial basket of the game, but they did lead the rest of the way after that. Hallice Cooke connected on back to back 3 pointers to cap an 8-0 Oregon St. run for an 8-2 lead 2 1/2 minutes into the game, while Oregon struggled with pace early, picking up 5 fouls in the first 5 minutes.

Roberto Nelson's 3 pointer opened a 13-6 lead, but Moser answered with an offensive rebound and putback at the 14:14 mark, but it Oregon would get only 2 more baskets from the field, both by Ben Carter, over the next nearly 6 1/2 minutes.

Olaf Schaftenaar's 3 pointer extended the Beavers' lead to 13 points, a 4-0 personal run by Moreland made it 26-12 Oregon St. with 11:25 to go in the first half, and a pair of Nelson free throws opened the largest lead of the game, 16 points.

Defense had been the talking point by both teams all week, and it was Oregon St., who played man to man all night, that first made good on that. Moreland had 2 early blocks, and it set a tone, as the Beavers blocked a half dozen shots in the first half, including the one below by Devon Collier, denying Moser. 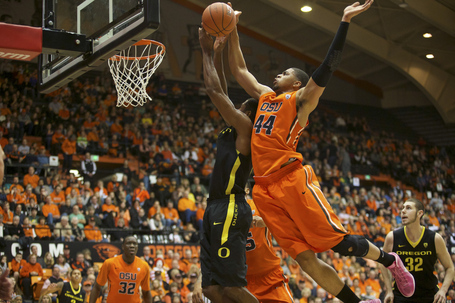 But the Duck defense would assert itself as well, as Oregon St. didn't score from the field again in the first half after Langson Morris-Walker's 3 pointer over 6 minutes before the break.

Oregon's Richard Amardi hit back to back baskets as Oregon made a 9-2 run, and Dominic Artis cut the deficit to a single digit margin at the 1:19 mark. By the break, the Ducks had made a 12-4 run, making it 37-30.

Amardi led Oregon at the break, with 7 points off the bench, as the Duck reserves accounted for 21 of their 30 first half points. Ben Carter and Jason Calliste both added 6, as Moser, with 4 points was the only Oregon starter with more than 1 basket in the first half. Joseph Young, Oregon's leading scorer, who came into the game averaging 18.8 points per game, was held to just 2 points in the first half, and would finish with only 5.

Nelson led Oregon St. to the locker room with 9 points, and Moreland had 8 to go with 7 rebounds, despite being 2 of 10 from the floor in the first half.

The Beaver bench was in considerable contrast to Oregon's contributing only 7 points in the first half.

The difference on the boards was already becoming apparent, with the Beaver holding a 25-16 edge already, to go with the 6 blocks, but 11 first half turnovers prevented Oregon St. from possibly blowing the game open early.

Oregon St. stormed out of the locker room with a 5-0 run, but Oregon immediately answered with their own 5-0 run, and the battle was on. 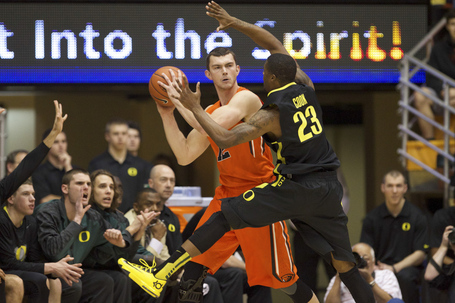 Angus Brandt,above, almost single handedly kept the Beavers ahead, scoring all 8 of Oregon St.'s points against 10 by an assortment of Oregon players going to the first media time out of the second half, which saw the Beavers up by Brandt's personal run, leading 48-40.

Moser answered with a 2 + 1 opportunity, but Nelson countered with a more long distance 3 points, and Oregon just could not get the game real close, never cutting the deficit to less than 5 points. 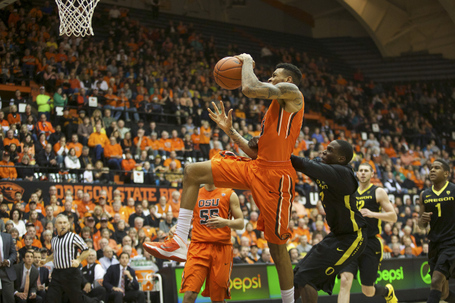 The most significant sequence to that point came just before the midway mark of the second half, when Calliste committed an intentional foul to stop a breaking away Moreland. Moreland, above, would make both free throws, and on the extra possession, Collier's layup plus a foul shot pushed Oregon St. ahead 63-50.

However, Oregon answered with their own 5-0 run, and shut Oregon St. out for almost 2 1/2 minutes. Moreland would prevent momentum from turning though, with another pair of free throws, and then hustling down for his 3rd blocked shot of the game, Oregon St.'s 8th of the game, literally snagging Richard Amardi's shot out of the air.

Offensive rebounding figured significantly in Oregon St.'s efforts to hold Oregon at bay, as Brandt and Moreland both hustled after misses, and the Beavers took over a minute off the clock before Morris-Walker's third chance basket opened a 12 point, 67-55 lead with just over 6 minutes left.

But Brandt picked up his 3rd foul with 5:31 left, putting Oregon into the bonus, and Challe Barton committed a 5 second turnover, the Beavers' 17th of the game at that point, which led to a Damyear Dotson basket.

Sloppy ball handling led to a forced shot by Nelson that was blocked by Dotson, which led to a Calliste 3 pointer, and suddenly the Ducks were within 67-60, with still 4:18 to go.

Collier came up with another big offensive board, on a put back of Brandt's rim bouncer, but Brandt would get his 4th personal foul with still 2:50 to go, and Jonathan Loyd's 2 free throws made it a 9-2 Duck run, and got Oregon to within 5 for the first time in the second since in the first 3 minutes of the game.

Brandt hung in though, and yet another offensive rebound for a putback with 2:15 left.

"Going clear back to the second foul he got, which was such a ticky-tacky foul, I was like, this is just going to mess up his mojo for the rest of the night," Oregon St. coach Craig Robinson said. "But he came out in the second half and he was just massive. He was a leader out there. It's exactly what you need from your seniors in a Civil War game."

Nelson turned the ball over on an errant pass, but Dotson couldn't control the ball on the breakaway, slipping and turning the ball back over when Oregon could have made it a 1 possession game. It was a critical missed opportunity, as Nelson answered with a back-door layin, below, on a pass from Brandt on the other end, for a 4 point swing, as Oregon St. went up 73-66 with less than 1 1/2 minutes left. 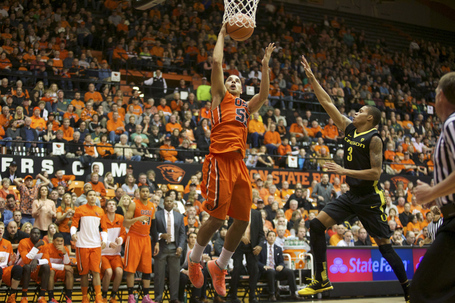 Forced to fire from long range, Oregon missed all 5 3 pointers they lofted in the final 1:18 of the game. This in turn forced the Ducks to foul time and again, and Moreland went to 10 for 10 at the line to reopen the lead to 10 points.

"In our last few games I didn't feel like I was breathing right when I was at the line," Moreland explained. "I believe a big part of free throws is catching your breath. I was working all week, all day and night, on this focus. It showed  tonight and I want to just keep building off of this."

Calliste would get a layin and then strip Nelson for a quick 4-0 run, making it a 6 point game with 31 seconds left, and though Moreland finally missed a free throw after making his first 11 of the game, Nelson nailed a pair with 11.5 seconds left to give him his customary scoring game high, 22 points in this case, and make the final 80-72. Nelson knocked down 7 of his 13 shots from the floor.

Oregon's bench wound up outscoring Oregon St.'s 47-14, led by Calliste's 17 points. Amardi added 13, and Carter 11, while none of the Duck starters got to double digits in anything.

Moser led the Oregon starters, with 8 points and a team high 9 rebounds.

Brandt finished with 14 points, and Cooke 10, on a perfect 3 of 3 night from 3 point range. Collier had 8 points off the bench.

Oregon St. ultimately out-rebounded Oregon 43-33, to go with their 8 blocks, to dominate the paint.

6,358 fans filled Gill almost 2/3 of the way up, the largest crowd of the season, despite the game going head to head with the San Francisco-Seattle NFC Championship game up the road.

The only real stat negative for the Beavers besides the lack of bench scoring was their 20 turnovers, 9 more than the Ducks suffered. It kept Oregon in the game as much as Oregon St.'s free throw shooting kept them in the lead.

"I couldn't be happier for our guys, because they've really been working toward having a game like this," Robinson said to sum up the game. "It wasn't perfect, but we handled their pressure. That's a good team, top-10 in the country at one point I think. We handled their pressure and physicality. I was happy to see our guys sort of have a little adversity thrown at them, pull themselves together without me having to go crazy, and fight and push back. It shows toughness."

Both teams embark on the Washington trip this week, with the Beavers visiting the Palouse to take on Washington St. (8-9 1-4) Wednesday night at 7 PM, and finishing up in Seattle Saturday afternoon at 2 PM against Washington (11-7, 3-2). 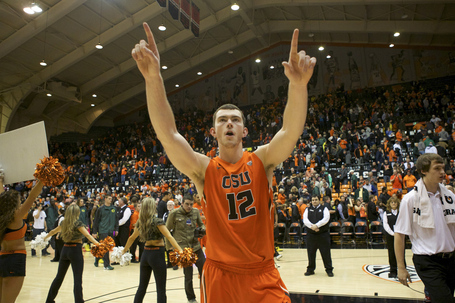