Dress A Drummer – What to Buy With Your Bye Week Budget?

Share All sharing options for: Dress A Drummer – What to Buy With Your Bye Week Budget?

What would Beaver nation think if football coach Mike Riley had to have his special teams performers play in their practice jerseys? Imagine if basketball coach Craig Robinson had to have the five recruits joining the team for the start of practice this week bring their warm-ups from their high school days because the tight Oregon St. budget couldn't cover sweats for them?

Yet that is essentially what has happened with one of the university's Division I programs, the Oregon State University Marching Band. The oldest band in the Pac-10, which Riley has noted "Does a great job; they are always doing something terrific to support us," has enjoyed success and growth similar to the football, basketball, and baseball programs in recent years. 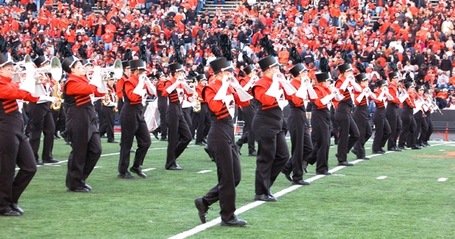 The 'Spirit and Sound' of Oregon St. is one of the sharpest bands in the Pac-10. 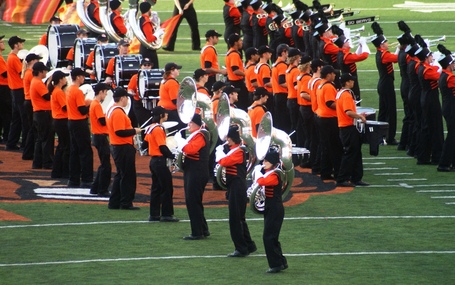 But look closer, and it appears the percussion section is under-dressed!

Just as with the other programs, success leads to success in recruiting, and the OSU Marching Band has grown in recent years from only about 100 members to 215 this year.

Dr. Brad Townsend, director of athletic bands, explains that "In 2006, Beaver Nation made the OSU Marching Band, the ‘Spirit and Sound of OSU', the Best Dressed Band in the Pac-10. This year, with the band toping 200 members, we have run out of uniforms! In fact, all of our drummers are not in uniform this Fall. We again need the help of Beaver fans to purchase another 100 uniforms, which will outfit our drummers, and account for further growth of the band in the future, which we anticipate."

As their part in addressing the overall budget challenges facing the University due to reductions in state funding, the OSU band budget has been reduced by twenty percent. Despite this, the band is continuing to improve quality as well as increase the number of student performers who have the opportunity to participate. This spring, season ticket holders were asked to support the band, and already Beaver Nation has contributed $8,500 to the OSU Bands. But there is still the matter of Brad's ‘nearly naked drummers'. 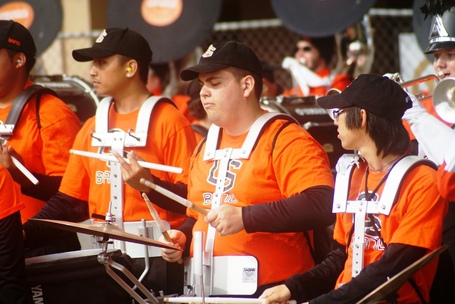 Oregon State Marching Band drummers currently only have a t-shirt and cap.

Townsend advises the cost will be $300 per uniform, and as an incentive, if a donor outfits one band member, their name will be sewn into the suit so that band members present and future will know who helped make OSU the Best Dressed Band in the Pac-10!" 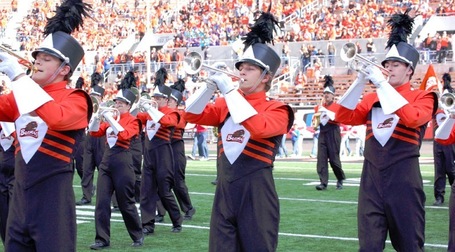 The oldest band in the Pac-10 at their finest.

But what if, in the light of all the other pleas for funding, someone's budget can't handle that much of a contribution? Or they aren't sure what their budget can handle?

Dr. Townsend assured BTD that contributions of any size are helpful, as the band strives to replace and update instruments, and provide scholarships, as well as obtain new uniforms. Additionally, contributions are processed thru the OSU Foundation, so a portion of each gift will be tax deductible. 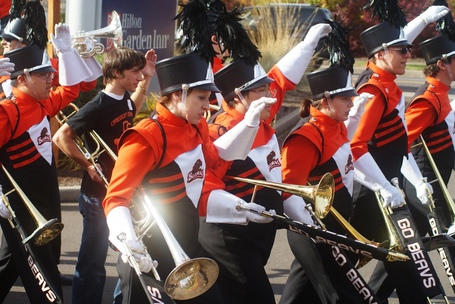 A shortage of uniforms means 'hiding' people in the formations.

Each home game, Beaver supporters drive to Corvallis, and tailgate around Reser, in addition to attending the game. Road games usually have hundreds, even thousands, of Beaver supporters paying to travel in support of the team, and many more still gather in support at a distance, with back yard tailgaters.

But what to do in a bye week? With no game, there is no need to fill the tank, stop by the store to stock up on munchies and beverages, or go to dinner afterwards to celebrate the win.

The weekly budget for travel or tailgating could be used to dress a drummer!

The stated goal of the Marching Band is to "Assure that the OSU Band takes and retains its place as a leader in the Pac-10 and Nationally. The support of the OSU community will continue the expansion, and assure the continued success of, the OSU Bands, in order to facilitate outstanding game day experiences for the fans and players alike". 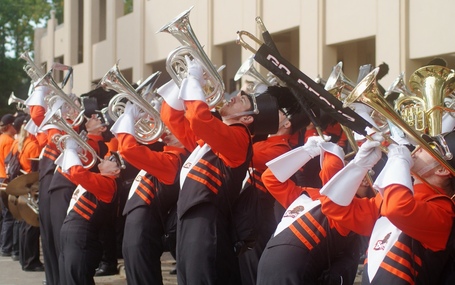 In addition to performing for home football and mens' and womens' basketball games, the band also performs for volleyball matches, gymnastics meets, and wrestling matches.

"The Volleyball team has had great support from our band as well", volleyball coach Taras Liskevych added.

More information on the band and links to the OSU Foundation can be found at http://osumb.oregonstate.edu/home.html

or by dropping by the band section at the UCLA game during Homecoming week.