Calvin Haynes made four free throws in the final 9 seconds, putting Oregon St. over the top in a 76-75 upset win over Arizona Sunday night at Gill Coliseum.

The second half was the reverse of the first half, in that the Beavers never led before the break, and never trailed after it. Arizona could never pull away in the early going, but responded each time Oregon St. would catch up, until Omari Johnson was able to tie it at 28, and the Beaver defense prevented the Wildcats from getting up a last shot.

Devon Collier scored to start the second half, and Arizona didn't catch up again for over 6 minutes, but then the battle was really on. This time, it was Arizona that caught up several times, but could never get a lead. A big reason was big Joe Burton, who immediately answered three of four ties with a basket to put the Beavers back ahead.

Burton also broke the 11th. tie of the game with a layin off an assist from Haynes with 28 seconds left, which put Oregon St. ahead for good, 72-70.

"I'm really happy for these guys," coach Craig Robinson said. "This was a total toughness win. The effort and the pace was tremendous. If anything, I might have to tone it back down a little."

Jared Cunningham had a five point minute and a half in the last 3 minutes, starting with a highlight show put-back jam off a Burton missed shot that left bodies strewn all over the place, but also put Oregon St. ahead, and delivered the message that the Beavers weren't going to fold under pressure. His 2 + 1 three point play put Oregon St. ahead for good with 1:38 left. 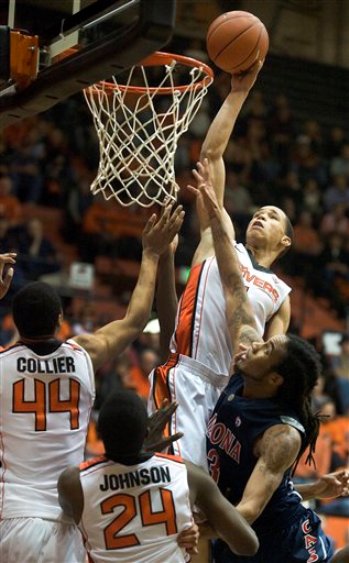 "It was amazing,’’ Robinson thought.  “He just kept going up and up. We’ve been on the receiving end of those, and it takes the wind out of your sails. It had to be great for everyone."

Cunningham was 10 of 11 from the line, and made his first 8, giving 34 in a row, and a share of an Oregon St. school record that had stood for 43 years and 11 months. Cunningham missed the first of two on his next trip, leaving him tied with Vince Fritz, who also hit 34 in a row in 1967. It was a record I never thought I'd see broken, as it has only even been approached once in 27 years. Danny Evans made 30 in a row in 1983, and Sasa Cuic matched that in 2004.

Burton had another strong game off the bench, scoring 16 points in 33 minutes.

"Every single one of Joe’s baskets felt like it was the most important basket of the game,’’ Robinson felt.

The Beavers had 10 offensive boards, leading to 10 second chance points. The Wildcats, in contrast, had only one second chance basket in the game.

Cunningham finished with 17 points, and Collier was the fourth Beaver in double digits, with 10 points.

Lamont "MoMo" Jones connected on 9 of 12 shots, including a couple of undefendable floaters, and led everyone with 20 points. Derrick Williams made all 6 shots he took from the field, and finished with 16 points, but was only 3 of 10 from the line.

Roberto Nelson had his first scoreless game, but had a pair of key passes that led to baskets, demonstrating that he can contribute without scoring. Angus Brandt's 7 points and 4 rebounds were also crucial in keeping Oregon St. in the thick of a battle that never saw either team open more than a 7 point lead.

The game was played in front of a crowd of over 5,200, and televised nationally by Fox Sports.

"We are getting this place back to where it should be," Robinson said of the atmosphere for the game.

The loss was only Arizona's third defeat of the season. The Wildcats (12-3, 1-1) head back to Tucson for their first home stand of the Pac-10 season, visits from the bay area schools.

Oregon St. (7-6, 2-0) shares the conference lead with Washington, and heads north for games with the Washington St. Cougars (10-4, 0-2), who have dropped three games in a row, Thursday night at 7 PM, and a showdown in Seattle Saturday with the Huskies, who are 10-3, and 2-0 in the conference, after sweeping a road trip to the LA schools that was wrapped around Washington's Holiday Bowl win. The game at Hec Ed will be televised by Fox Sports Northwest, starting at 3:30 PM.