Share All sharing options for: Top 10 Moments of the 2010 Football Season

Looking back on the 2010 season, I found that there were some pretty great moments. You know, except for the losing, losing, and more losing. Below are my Top 10 moments, some personal, and some having to do with the team. Feel free to make your own list in the comments section! 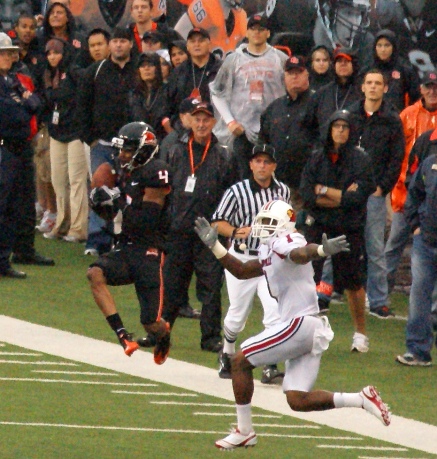 At the time, the 7 point victory over the Cardinals didn't feel that great. But since then, Louisville has shut out BCS bound Connecticut, 26-0, and beat Southern Miss in a Bowl Game. So looking back, it actually was a pretty good victory.

But all I remember thinking at the time was, please, please win this so GameDay could come to Boise the next weekend. And thanks to James Dockery, the Beavers hung on, and low and behold, the GameDay crew was on the Smurf Turf a week later.

9. Coming back after trailing 21-0 at Washington

Even though we lost this one, at least we made it respectable. For those who do not remember, the Beavers played possibly their worst quarter of Football EVER, and trailed Washington 21-0. But thanks to an incredible game by Jacquizz Rodgers, the Beavers mounted a comeback and tied the game at 21. That's all I can remember.

This was just an awesome play. Already leading 10-7 against the 9th ranked Wildcats, Ryan Katz rolled out to his right and threw the ball across his body. I remember thinking while the ball was in the air, this is an interception waiting to happen. But when the ball came down, there were no Wildcat defenders in sight, just a wide open Markus Wheaton streaking into the end zone.

After three total turnovers in the first five minutes, Oregon State's offense settled down and produced arguably the best drive of the year. The drive went 15 plays, and it was capped off by a 6 yard touchdown pass to Jacquizz Rodgers on 3rd and Goal. Leading 7-0, the sold out crowd was electric as ever, even matching the 2008 USC Game. 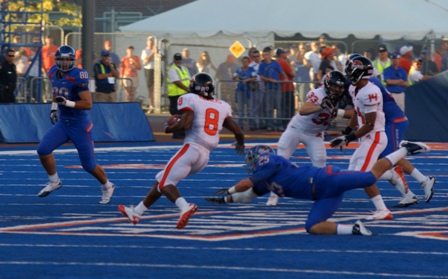 6. James Rodgers punt return for a touchdown at Boise State

Already trailing 7-0 late in the first quarter, the Beavers needed a spark, and James provided it. The older brother found a seam and took a 54 yard punt back to the house, tying the game at 7 and giving the big Beaver Nation gathering something to cheer about for the moment.

5. Team huddle jump around after 3rd Quarter against USC

Leading 23-7 after the 3rd Quarter, Beaver Nation was still a little nervous about the outcome. After all, this was an explosive USC offense (Except on this night), and it still was a two possesion game. But as AC/DC blared, the entire Beaver bench huddled up and began to jump around. At that point, you knew nothing was going to stop them.

Numbers 4-1 after the break 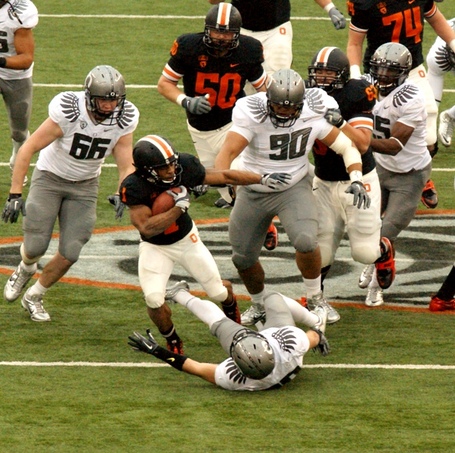 This was just sick. There are a couple of plays in every game where a player does something spectacular, that in the end has the same result as if it didn't happen. For example, Jared Cunningham could choose to simply lay the ball in on all of his fast breaks, but instead he dunks it to get the crowd juiced up. In the end, the basket is still only worth two points, but the momentum instantly swings and the crowd is raucous for the next few minutes.

This is exactly what happens here. If Quizz doesn't run over Boyett, he still gets a first down and Reser Stadium does the 1st Down chant. But since he did, the crowd is still buzzing ten minutes later, and the momentum is instantly changed. At least it was until we had to kick a field goal.

My first ever GameDay experience, and it was a great one. After arriving in Boise at 11:00 PM Friday night, I got a solid four hours of sleep before making my way to Bronco Stadium. The line to get in took forever, but I finally got in about a half hour before the show started. I got my five seconds of fame at the end of the show, when my sign finally made it on TV.

Pretty great morning, but it would of been better in Corvallis. Which brings me to #2....

I know they came here for the Ducks, but who cares? The point is my all-time favorite TV show was going to be in Corvallis, and I didn't care why. I arrived at the quad at 4:30, just as the gates to the mosh pit opened. Unfortunately, I arrived about five minutes too late, and had to wait about an hour before they finally let me in. 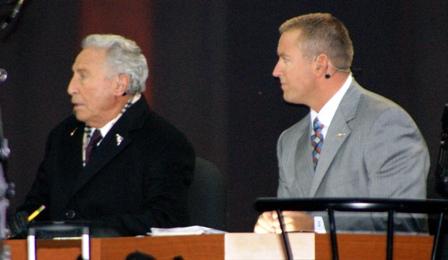 for the Civil War.

I thought Chris Fowler had the line of the season, when he opened with "Welcome to Corvallis, where a Friday all-nighter has turned into Championship Saturday morning." So true. My "Your Score = O" sign got on TV once (Grainy Cell Phone Photographic Evidence HERE), but you couldn't make anything out except the toilet seat.

Still, it was a great morning.

1. Rushing the field after beating USC

I was disappointed to see that ABC cut away from our game without showing the field rush, so the only evidence we have is in Andy's photo. But whenever I rush the field, it's going to top the list. I know they were only ranked 20th in the nation, but it was still a great victory, especially after the previous loss to Washington State.

So there you have it. Did you attend GameDay or rush the field? Make your own list and leave it in the comments section.