Share All sharing options for: Oregon St. Pulls Away From Arizona St. 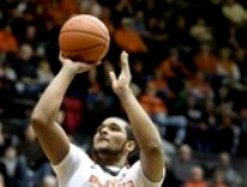 Joe Burton (l. AP photo) came off the bench to lead Oregon St. to an 22 point win over Arizona St. in the Pac-10 Conference opener for both teams Thursday night in Gill Coliseum. Burton poured in a career high 17 points, 9 in the second half, and just missed a double double, pulling down a game high 9 rebounds. Jared Cunningham was close behind, with 16 points, and the Beavers got a lot of bench production, as Ahmad Starks and Roberto Nelson both were also in double figures, with 12 points apiece.

Ty Abbott led everyone in scoring, with 18 points for Arizona St., but the Sun Devils were without their leading scorer, Trent Lockett, who averages 14.7 points per game. Lockett sat out the game with a sprained big toe.

The game, which went over 4 minutes before anyone scored, was tight until halftime, with neither team taking more than a 4 point lead. The Beavers were up only 34-30 at the break.

Oregon St. steadily pulled away in the second half, on the strength of 58% shooting, stoked by both better passing and rebounding.

"Their match-up zone has been so hard for us for the last couple of years, so it was really nice to have some success against it. The success we had against it was absolutely and unequivocally a function of how we practiced this week. The guys put the time in. They were attentive. They worked hard. What you saw was a result of four good days of practice."

Over 4,500 fans half filled Gill for the game, despite most students still being out of town for the holidays, and the availability of the game on Fox Sports NW.

"It is always big to win the first game, and beat a good program like Arizona State. It's big to have that first game televised and play well. But it's only one game and we have another game in two days that we have to be ready for," Robinson added.