Oregon St. received their 3rd offensive line recruitment for their 2015 football class this week, when Jacob Jimenez from Pflugerville High in Pflugerville, TX, which is the same familiar football name that current Beaver running back Storm Woods is from, announced he's coming to Corvallis, even tweeting out a picture with head Coach Mike Riley in the process. 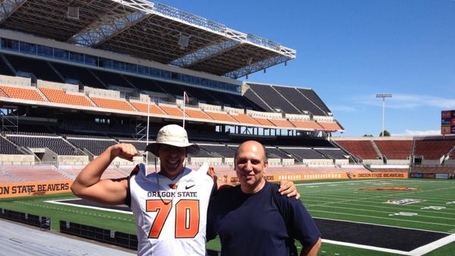 "I just told coach Riley the minute I stepped off the plane that I knew I was going to come back and this is where I wanted to spend the next four years," Jimenez has said.

Jimenez's other FBS offer came from UT-San Antonio. He was not rated by either Rials.com or Scout.com when he announced he was headed for Oregon St., but Rivals has quickly since given him a 2 star rating.

Here's one of his game highlight videos from last year, when his Panthers took on Round Rock, from Hudl (there are more to watch there):