It was better (barely)

Share All sharing options for: Riley, Mannion, and Doctor Meet The Media

Thursday was the Oregon State contingent's turn to meet the media at Pac-12 Media Days. Mike Riley first spoke in front of everyone on the main stage, then met three Pac-12 Network analysts in front of the television cameras. After that, Sean Mannion and Michael Doctor sat down with Mike Yam, Rick Neuheisel, and Curits Conway to discuss the upcoming season.

"I think that it was good. The exposure is good," said Riley on Mannion's summer tour across the country. "I think the course that he took when he looked into coming out put him on the radar as far as talking more about him."

As far as the lines go, the Beaver head coach said he likes the potential of Miami (Florida) transfer Jalen Grimble at defensive tackle. He expects center Isaac Seumalo to be back early in the season as he completes his recovery from a foot injury, but it remains to be seen whether or not he will to be ready to play in the opener against Portland State, which was one of the more telling bits of information divulged today. 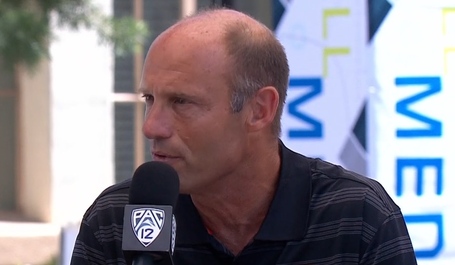 "I think it's just one of those things we just stayed with and finally got better at. We had a lot of disruption in the offensive line early," said Riley, above, about the run game last season. "That's how the running game is supposed to look, and also where we have to go in the future."

When asked if he feels like the dean of the conference, Riley says he tries not to think like that and focuses more on being thankful. There were not a ton of interesting nuggets from Riley today, but then again, there rarely are at these things.

Mannion did drop in some interesting tidbits. He roomed with UCLA's Brett Hundley, Florida State's Jameis Winston, and Missouri's Maty Mauk while at the Manning Quarterback Academy. And no, there were no Johnny Manziel-like antics. At least that he was willing to share. 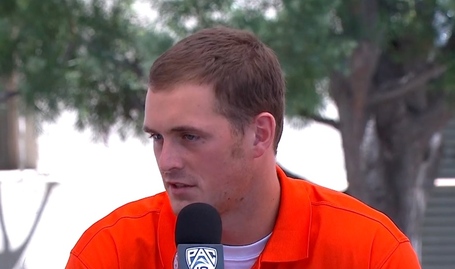 He also drew this, which is a lot better than I could have done. 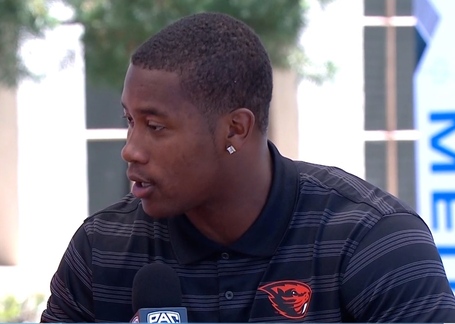 Doctor, above, was asked about that heartbreaking Civil War loss last season, to which he replied, "Being that close with a team like Oregon, it does nothing but make me hungrier to get that win against them."

Here's Mannion and Doctor's conversation with the Pac-12 analysts:

Riley also shared a late roster update, that MLB Joel Skotte will retire from football. Skotte, the 2011 Oregon 5A Defensive Player of the Year, who began last year as the starting middle line backer, lost the job part way through an injury hampered campaign, and eventually had surgery on his neck. Skotte was scheduled to sit out this fall anyway, using his redshirt, to have his neck heal, but has opted to concentrate on his studies for the remainder of his time at Oregon St..

"It's a result of the surgery, and just not being sure that he's ever going to play," Riley said. "He's going to focus on school."

There was some interesting news on the Husky front, like the fact that Washington quarterback Cyler Miles will miss their season opener at Hawaii after allegedly assaulting a man last February. We also learned that Husky wide receiver Kasen Williams is on track to return during Fall Camp after being out with a broken leg.

(AndyPanda also contributed to this story)