Summer camp starts next week, and one of the most important decision processes facing Oregon St. is how to deploy their options on the defensive line.

With 3 returning senior starters at linebacker, the position group is widely regarded as the strongest on the squad. And with 3 senior starters also back in the secondary, there is good reason to expect an improved defense this season.

But how the back 7 (or 8 in some cases) fares could depend most on what happens up front.

Dylan Wynn returns, and based on spring ball, where he ran with the 1s, 2s, 3s, and most of the special teams units, as well as tuning up the chainsaw, the senior captain will be all over Reser, including playing at both his familiar DE position but also at DT. Wynn could (and should) log as many plays as any Beaver, and that's a good idea, as you want your best players to have the maximum number of opportunities to make plays that make a difference in the game.

But who will be helping Wynn across the front?

Scott Crichton left early for the NFL, and a well-deserved opportunity to take care of his family forever. But senior starters John Braun and Mana Rosa are also gone, as is Devon Kell, who saw about as many snaps as any of the starters, being the rotation guy for everyone, as well as taking over as a starter when Braun was injured.

In fact, Wynn has 32 of the 33 career starts anyone who will suit up for Oregon St. this season have logged.

As a result, junior transfer Jalen Grimble from Miami or senior Siale Hautau could actually wind up being the most important Beaver this fall, for better or worse.

That's a statement that's bound to get a reaction, given that the likes of Sean Mannion, who is going to rewrite the Pac-12 record book for quarterbacks, Steven Nelson and his blazing speed in the secondary, and Isaac Seumalo, who is on the watch lists for the Rimington, Outland, and Lombardi Awards, are around.

But everyone knows what those guys are capable of, and other than deciding if Seumalo can make the biggest difference at Center, Guard, or Tackle, and we know Coach Mike Riley is going to turn them loose.

There's no shortage of options for the defensive line, even if perpetual false-start JC recruit Kyle Peko never qualifies academically.

Jashawa James appears headed for a strong year stepping in at DE for Crichton, and Edwin Delva, who has that one start not on Wynn's ledger is back.

Both Lavonte Barnett at DE and Brandon Bennett-Jackson at DT showed a lot of promise during spring ball, and Titus Failauga, who was named the scout team Player of the Year last season, and Noke Tago have a chance to see action on "meaningful" downs this year too. 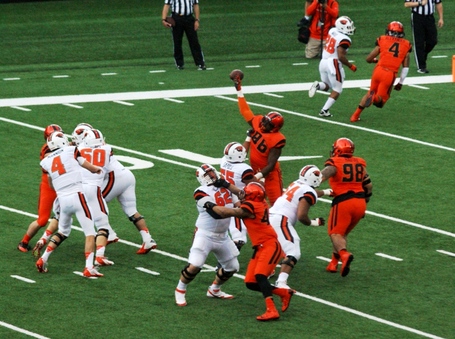 And there is the interesting transition project, where former WR Obunm Gwacham has been moved to DE, and with the help of Oregon St.'s new training table specialist Stasi Kasianchuk, put the weight on his slim but very tall frame that could make him a force as a pass-disruption specialist. See above how even Mannion had trouble getting the ball past him.

Throw in a half dozen recruits, not all of whom will necessarily red-shirt, and all of which bring something to the table, and you have a lot of options. It's easy to visualize any of these players being the next emerging star, and several others that turn into good contributors in the best "Lunchpail U" mold of the Riley era. However, some of them will probably fade into the sideline, at least for a while, with any appearances relegated to 4th quarters with a score differential of more than 2 touchdowns. Something probably pretty scarce in the increasingly competitive Pac-12. But which player is that emerging star, which ones are the next John Braun and Devon Kell, and which ones fade from view and memory? No one knows at this point.

And how defensive line coach Joe Seumalo, Defensive Coordinator Mark Banker, and ultimately Riley, decide to approach the defensive line will dictate how both the linebackers and DBs can be utilized. 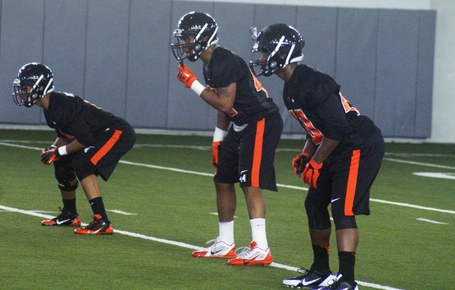 Those alignments obviously take one or more linebackers off the field. When the Beavers were thin at the position, that wasn't a bad strategy. But with Michael Doctor healthy, D.J. Alexander apparently healthy on a sustainable basis after his neck surgery before the Hawaii Bowl to address bone spurs, and Jabral Johnson now with a year's starting experience under his belt, the Beavers don't necessarily want to take any of the strongest position unit on the team, above, off the field very often.

Wynn's appearances at DT certainly add an interesting twist to for opposing offensive coordinators to plan for, but those will likely mostly come in a 4 man front, in the situations where it makes most sense to get Gwacham on the field, because Wynn, at only 6'2" & 275 lbs., is not a run stuffer, despite his penchant for hitting people in practice without even bothering to have shoulder pads on.

To go with a 3 man front, which would allow keeping 3 LBs on the field in a 3-3-5 nickel package, or 2 in a dime situation, it will require a big body in the middle. which probably means either the 310 lb. Grimble, or the 350 lb. Hautau. Hence, their potential to be the most important Beaver.

Riley and Banker must also avoid going overboard with situational use of too many of their D-line options that will make for an easy read for opposing quarterbacks, especially in a conference full of read-option systems, as well.

Watching Sean Mannion throw darts to a still beomg sorted out set of receivers will catch the eye of a lot of those that turn out for the mid-day practices that start next Monday, but keeping an eye on the progress of the defensive line could be even more important in handicapping the Oregon St. season.