The non-conference schedule continues to come together.

ESPN has released half of the brackets for their early-season tournaments, and we now know that the Oregon State men's basketball team will face Oklahoma State in the first round of the MGM Grand Main Event "Heavyweight" bracket. The Cowboys finished last season with a record of 21-13 and lost their NCAA Tournament opener to Gonzaga. They lose their top two scorers from that team.

The game will be played at 5:30 PM Pacific on November 24 in Las Vegas, and will be shown on ESPN3. Following that game will be a meeting between Tulsa and Auburn, televised by ESPNU. The winners of those games will play two days later in the tournament championship at 8:30 PM on ESPN2, while the consolation game will be contested at 6:00 PM on ESPN3.

There is also a regional round segment of this tournament, featuring two games on campus sites against the four "Middleweight" teams involved. The Beavers will face Oral Roberts in one of those, and a team still to be determined in the other. That team will likely be from Division II, as is usually the case when these types of tournaments struggle to fill their fields.

You can view the full bracket here, including when its updated. It's easy to read and full of shiny logos.

If you don't want to click out, here it is as it stands now. 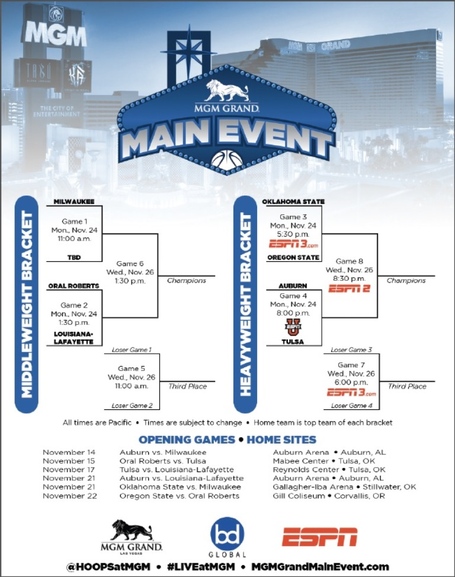 Here's what the non-conference schedule looks like right now:

November 26: vs Tulsa or Auburn in Las Vegas