Oregon St. blitzed USC early, jumping out to 6-0 and 11-2 leads behind 5 early points by Angus Brandt. Langston Morris-Walker added another half dozen, wrapping a 2 + 1 opportunity around the first media time out to make it 14-3 Beavers, and when it reached 16-3, Trojan coach Andy Enfield was forced to start using time outs early on.

Defensive pressure by Oregon St. was behind it all, as Eric Moreland had a pair of early blocked shots, and Daniel Gomis then blocked 3 more in a matter of 3 minutes.

After Morris-Walker's second 3 pointer made it 25-10 with just over 6 minutes left in the first half, Moreland made history with his 3rd blocked shot of the game, which moved him past Scott Haskin's previous record of 172 for most career blocks in Oregon St. history.

"It's an honor to accomplish that," Moreland said.

It also led to a break out, and a lob pass from Hallice Cooke to Morris-Walker for the dunk than made it 27-12, and forced a second USC time out.

It didn't slow the Oregon St. onslaught though, as the Beavers pressed their advantage to 31-14 to prompt a 3rd Trojan timeout, and then extended the lead to 18 points on an Olaf Schaftenaar 3 pointer.

Roberto Nelson, the Pac-12's leading scorer, was happy to attract attention and watch other Oregon St. players produce, but he did get his second basket of the half to extend the lead to 40-18, and Malcolm Duvivier got in on the action, with a 3 pointer that made it 43-20, the Beavers' largest lead of the first half, at halftime.

Both Brandt and Morris-Walker reached double digits before the break, both with 11 points. It's the 13th game in a row that Brandt has hit double digits.

Byron Wesley led USC in the first half, with only 5 points, and he and Nikola Jovanovik were the only Trojans with multiple baskets before the break.

USC showed a small sign of life, starting the second half with a 5-1 run, before Moreland managed to slow the Trojans's new found momentum by causing 7'2" USC Center Omar Oraby to miss a dunk on the rim. 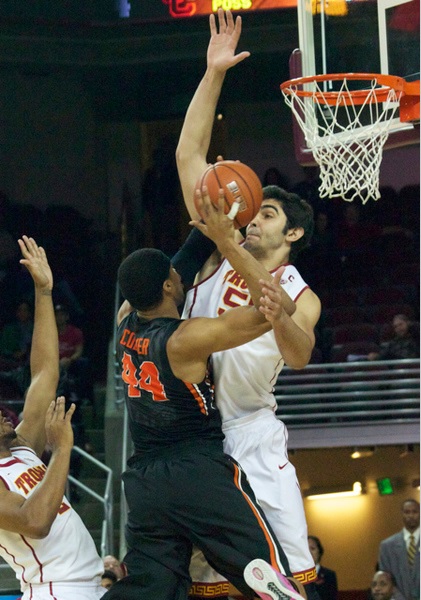 Brandt picked up a pair of fouls in the first 3 1/2 minutes of the second half, but Devon Collier, above working against Oraby (photo by Shotgun Spratling, Conquest Chronicles), picked up some of the slack, opening Oregon St.'s first 26 point lead of the game, putting the Beavers up 55-29, and prompting USC to use their next to last time out with still over 14 minutes left to go.

The Beavers opened one more 26 point lead, but then the Trojans mustered a 10-0 run, bolstered by a pair of offensive rebounds, that forced Oregon St. coach Craig Robinson into a timeout with still 10 1/2 minutes to go.

Oregon St., being little experienced at playing clock ball at all, never mind the majority of the game, struggled at times in the second half, and though they reopened an 18 point, 68-50 advantage that prompted Enfield to use USC's final timeout with still over 5 minutes to go.

A critical development came with 3:15 left, when long-time Pac-12 official imposter Tony Padilla ejected Oregon St. freshman point guard Hallice Cooke for a phantom flagrant 2, after missing an obvious flagrant 2 on J.T. Terrell for a left hook to the side of Cooke's head.

The ejection shouldn't cost Cooke the first half of the UCLA game on Sunday, as the ejection wasn't ruled to be for fighting. But the free throws made it a 23-9 USC run, cutting the deficit to 68-56.

The Trojans scored 10 straight points, capped by a Terrell dunk, to pull within 68-60, and Nelson, struggling unusually at the line, with 3 misses on the night, made only 1 of 2 free throws.

Pe'Shon Howard was initially credited with a 3 pointer despite having 1 foot clearly on the line, and after that was corrected, his subsequent pair of free throws made it a 5 point, 69-64 game.

"The home team is always going to make a run," Robinson said, "so it was real important that we get out to a 'comfortable' lead."

Collier came up with a pair of free throws and Oregon St.'s 9th blocked shot of the game, and Moreland managed to make 2 of 4 free throws, while Wesley fouled out, and Brandt capped an 8 of 8 night at the line, sealing the 10 point, 76-66 win.

Coupled with their 76-75 overtime win in the first meeting on the season, tonight's victory game Oregon St. their first season sweep of USC since 2010.

Nelson finished with a team high 14 points, 10 of which came in the second half, to lead Oregon St., while Terrell had a game high 21 points for USC.

Collier came off the Beavers' bench for 12 points and 6 rebounds, and Brandt had 13. Only 2 were after the break, but they were huge free throws that made it a 4 possession game, and prompted the Trojans to throw in the towel, rather than turn the remaining 25 seconds into a foul festival.

Morris-Walker was the only other player in double digits scoring wise, with his first half 11.

Moreland finished with just 7 points, but a game high 14 rebounds, as well as the 3 blocks and 2 steals.

Gomis finished with 4 blocks. Cooke contributed 9 points and a game high 6 assists before being bounced.

The Beavers will head across town to take on UCLA Sunday night, while the Trojans will host Oregon Saturday.

The Ducks (19-8, 7-8) downed the Bruins (21-7, 10-5) 87-83 in double overtime tonight. UCLA played without their 2 best players, as Kyle Anderson and Jordan Adams, the Bruins top 2 scorers and top 2 rebounders, were both suspended for the game for violating team rules. Both will be back on Sunday when the Beavers visit Pauley Pavillion.