In a conference where seemingly everyone is an arch rival with everyone, there's one rule of thumb; never miss an Oregon St.-USC game, because something, good or bad, is bound to happen you wouldn't believe if you hadn't seen it. A lot of folks seemed to ignore that, as a small crowd of only 3,774 that had Gill barely more than 1/3 full turned out, but those that did were loud, and also saw something straight out of an old-west gunfight, with questionable law enforcement, a lot of errant shots, and no idea who was going to win until the end.

Near enough the end, Oregon St.'s Roberto Nelson came up with the last big and impossible shot of the game though, making a twisting scoop shot in traffic with 25 seconds left that put the Beavers ahead 76-74, which was as large as any lead they had had all evening. That and his other basket earlier in the overtime made up for his earlier wild miss at the end of regulation that if good would have won the game then.

Nelson had wound down the clock to the point where Oregon St. couldn't lose, as no matter what happened, USC couldn't have gotten up a shot, but there also wasn't time for an offensive rebound either when Nelson missed.

"He had me fooled," Oregon St. head coach Craig Robinson said afterwards. "I thought for sure it was going to go in. But then I thought 'I'm sure we won't win this game now', after your best player takes the shot to win the game and misses."

But overtime allowed Nelson a do-over, and that's something the Trojans couldn't afford, even having done a good job of doubling down on the driving Beaver leader.

"That's the thing about Roberto though," Robinson added. "He's always absolutely certain that no matter what has happened, that next shot is going to go down."

USC had a chance to at least extend the game though, as Pe'Shon Howard drove the right side of the lane, crashing into an apparently set Daniel Gomis, but drawing the blocking call instead, and getting up a shot that was waved off before it bounced around and went in, with division of opinion as to whether it had been tipped or not. It was that kind of night.

The upshot of it all was Howard, who hadn't missed a free throw all night, had 2 shots at the line with 9/10th of a second left. Howard sank the first one despite a din that made it seem like Gill was much more than 1/3rd full. But the shot to extend the game was off line to the left, and Devon Collier lept across the lane to come down with the rebound in a melee, which ended the game, and Oregon St. got out with the 76-75 win. It was USC's second consecutive loss in overtime.

Early on, Oregon St.'s efforts to not rely on Nelson were even more effective than the USC defense, as the Pac-12's leading scorer took only 4 shots in the first half. A couple of them were 3 pointers though, and both went down, so Nelson still had 10 points by the break. 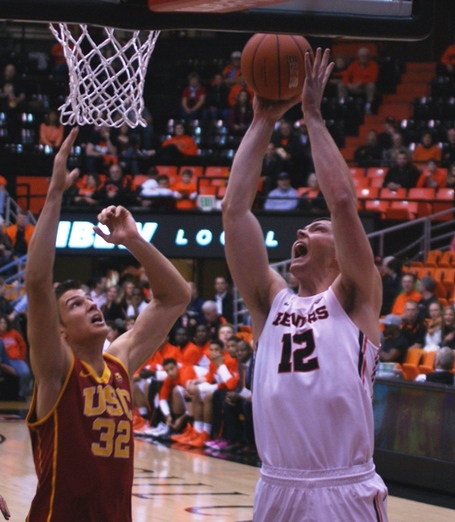 USC had a 39-36 lead though, as Angus Brandt, above, was Oregon St.'s main offensive weapon early, with 11 of his 14 points in the first half, but Eric Moreland again struggled to score. The deficit would have been larger though, had Moreland not blocked 2 shots on the Trojans' last possession of the half.

Fortunately for Oregon St., Nelson would wind up with the ball in his hands more later.

Besides Nelson, Hallice Cooke also came up big when it counted. Cooke didn't score until the second half, but his first basket put Oregon St. ahead 40-39 a minute after the break, for the first time since they had led 4-2.

Cooke also had a personal 4 point run to keep the Beavers in the game, after the Trojans' Brendyn Taylor had put USC ahead 53-47 shortly before the midway point in the second half. 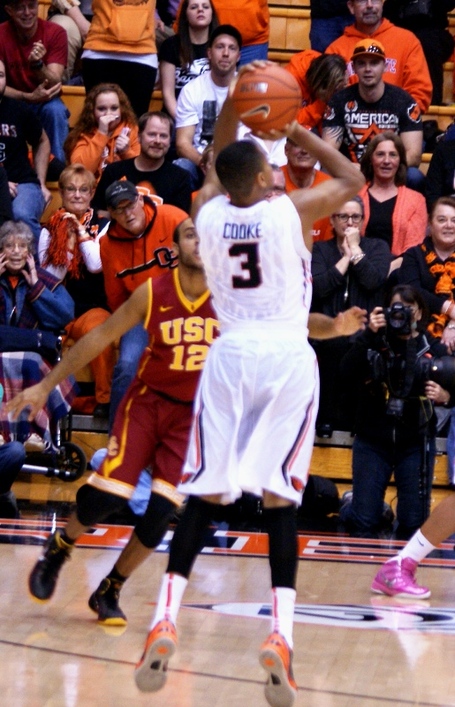 But his biggest bucket of the night came after Nelson rebounded a Byron Wesley missed 3 pointer, and hit a breaking Gomis, only to have Gomis mis-execute the slam dunk. A hustling Moreland got the offensive rebound, and kicked the ball out to Cooke, who buried a 3 pointer, above, to tie the game at 72 apiece with 53 seconds left. It would be the last points scored in regulation.

"That showed a lot of trust in a freshman, and that's important," Robinson felt.

"Hallice is in the gym every single day working on that shot," Brandt added. "It's no accident it went in."

The other key sequence of the game actually came much earlier in the game, when, with 8 1/2 minutes left, Omar Oraby, USC's 7'2" center, who had been the most dominant player in the game to that point, drew his 4th foul, and then based on dubious translation of Iranian, a technical as well, which counted as his 5th foul, and sent him to the bench for the rest of the way. 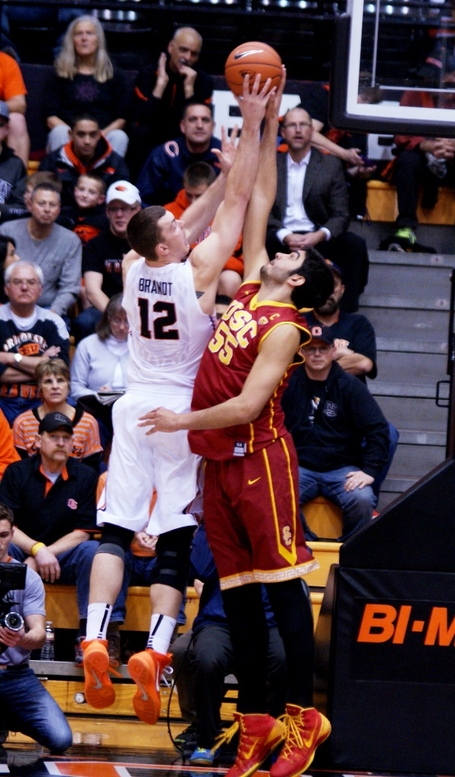 Oraby had 13 points, 8 rebounds, which would still wind up leading the Trojans, and 4 blocked shots, including 1 against Brandt, above, at that point, and USC had a 6 point lead, which would never be that large again.

Oregon St. won as much as anything by being lucky, but they also made that luck, and erased the effects of a poor shooting night in which they shot below 42%, by out-rebounding USC, especially on the offensive end.

The Beavers had a 47-36 edge in rebounding, which included a season high 19 offensive boards. The extra opportunities led to winning the points in the paint battle against a tall Trojan team that used 3 players 6'10" or taller.

Nelson's 4 overtime points made him the game's high scorer, with 24, taking that honor away from Wesley, who led USC with 23.

Cooke finished with 11 points, and Collier came off the Beaver bench for 13. 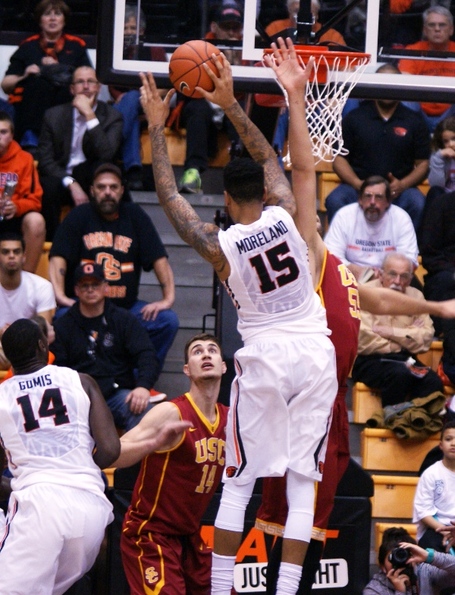 Moreland, above, finished with only 5 points, but had a game high 10 rebounds, and 4 blocked shots. Nelson also had a career-co-high 8 rebounds, 3 of which were on the offensive end.

Gomis, despite the missed dunk, had a solid game, with 5 points, but also 6 rebounds, including 4 of the offensive ones, in only 15 minutes of work. One of the offensive rebounds led to one of his baskets in the last minute before halftime. Coupled with Moreland's blocks, in the 1 point game, it was as about as big a sequence as the end of game heroics by Cooke an Nelson.

Howard was the only other Trojan to join Wesley and Oraby in double digits, with 16 points.

Oregon St. improved to 12-8, and 4-4 in the Pac-12. It's the first time the Beavers have been .500 in conference this deep into the season since last century.

The Trojans visit Oregon Saturday, while the Beavers will host UCLA Sunday MORNING at 11:30 AM, in order to ensure completing the game before the Super Bowl.

It wasn't anyone's best night in Corvallis tonight, but because the Beavers kept digging, it was a great day to be a Beaver, and instead of the distant sounds of "Conquest', it was "Hail To OSU" that played as the crowd filed out. Always good to cue the fight song! 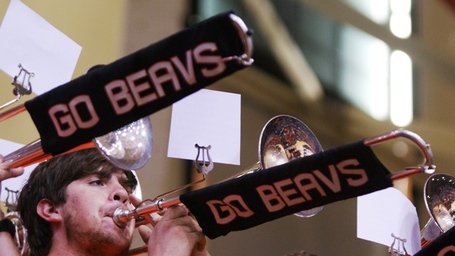 (Photos to come by Andy Wooldridge)