Oregon St.'s Brandin Cooks, the 2013 Bletnikoff Award winner as the best receiver in college football last season, is making an impression, and money, at this year's NFL Scouting Combine.

Cooks caught the attention of scouts over the weekend with preliminary 40 times of 4.30 (not .40), but of course, hand timing can be less than totally accurate.

The official times took care of any doubt though.

Cooks cranked out an official 40 time of 4.33, which not only was the fastest time of the wide receivers at the combine, it tied for 7th fastest among WRs since 2006. Jason Hill's 4.32 in 2007 is the only faster time by any Pac-12 WR, and the conference is known for producing some pretty good offensive players.

The combine measures more than just a players' straight-line burst speed though, and Cooks' ability to combine speed and change of direction really shone.

Cooks' 20 yard shuttle time was tied for the fastest ever since 2006, and best of any WR in that span.

But it was in the 60 yard shuttle that Cooks really cemented his reputation, with a time of 10.72. That's the best time EVER in the NFL Combine's database.

"Speed kills, and I feel like that's what I'm going to bring to the game," Cooks told the media in attendance. "For me, I'm a playmaker. I'm able to create plays from nothing. Be able to catch a 3-yard ball, I'll take it the distance. Those RAC (run after catch) yards, yards after the catch."

Because he wore Adidas cleats, Cooks' Sunday 40 time earned him $10,000, the amount posted by Adidas for the fastest at each position if it was done wearing their shoes.

And once all the position groups finished, that time earned Cooks another $100,000, as the best time of the Combine, after Rice University DB Phillip Gaines was only able to get within 5 /100ths of Cooks' time.

Kent State running back Dri Archer ran a 4.26, but not wearing Adidas.

Also of interest, former Oregon TE Coly Lyerla claimed the $10K for tight ends, with a time of 4.61.

Cooks also did 16 reps on the bench press, most of the WRs.

Wide receiver isn't just about speed, though, and its at least as important that the comments from scouts about Cooks have been about his precise route running and good hands. 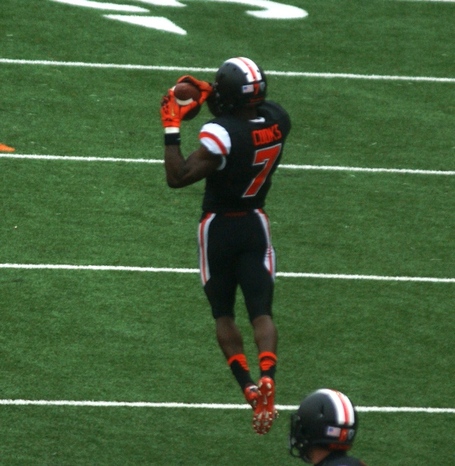 Oregon St. head coach Mike Riley is of course happily reminding all receiver prospects out there about

Here's a run down of all the conference's participants whose' groups performed over the weekend.

Cooks isn't the only Beaver in attendance in Indianapolis.

Defensive end Scott Crichton participated in Monday's drills for defensive linemen, and posted a time of 4.84 in the 40, 7.19 in the three-cone drill, 24 reps on the bench press, a 31.5-inch vertical jump, and a 108-inch broad jump.

Crichton, like Cooks, decided to forego his senior season to enter the draft a year early.

"I did it for my family,'' Crichton told the Seattle Times' Bob Condotta. "I love my family. I've taken this responsibility to take care of them. My mom works two jobs, and my dad is disabled, yet still works a job, too. They are getting old, and I want them to retire and just stop working. I was going to come back to college. But just to see my family struggle; we didn't have much growing up and to see my family struggle, I wasn't OK with that. So I had to do something. And this is one of the greatest opportunities for me to take care of my family.''

Senior cornerback Rashaad Reynolds is participating in drills today, when defensive backs get their time on the stage.