Beavers Bubbled Over Against Washington

Share All sharing options for: Beavers Bubbled Over Against Washington

Coming into Saturday's meeting with Washington, hopes were high that Oregon State would take advantage of a struggling Husky team and put itself into prime positioning for the NIT. Those aspirations were quickly squashed as the Beavers put forth one of their worst efforts of the season, struggling all afternoon on the glass to the tune of a 24-point, 86-62 loss.

Things didn't appear to be that dire in the early going. A 5-0 run by Roberto Nelson put the hosts ahead by six with nine minutes remaining in the first half, and Gill Coliseum was rocking. 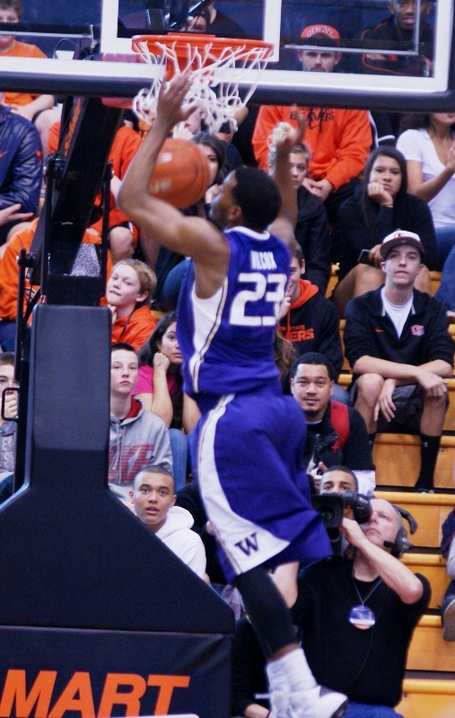 That would be the last lead Oregon State enjoyed, however. C.J. Wilcox, above, and Andrew Andrews took turns burning the Beavs as Washington opened a 30-25 lead, just the start of a 30-8 binge that all but decided things on a sun-washed day in Corvallis.

The unlikely duo of Daniel Gomis and Malcolm Duvivier finally stopped the bleeding with a little over 15 minutes remaining, and when Nelson and Devon Collier dropped in consecutive layups coming out of the under 12 media timeout to pull the Beavers within 11, hope sprung eternal for the 5,280 in attendance.

Then Perris Blackwell made a layup of his own. And then Wilcox buried a triple. Then an unguarded Blackwell tipped in his own miss. And then Simmons gashed the Oregon State defense again up the middle for another layup. That run was the straw that broke the camel's back, if you will, putting the visitors up 20 with eight minutes to play.

"It's just so out of character. It's just preposterous," head coach Craig Robinson said of the Beavers' rebounding effort. The Huskies outrebounded Oregon State, 43-23.

Little-used bench players Challe Barton, Cheikh N'diaye, Jarmal Reid, C.J. Mitchell, and Victor Robbins all action in the final six minutes. Barton was the only one of that group to score, netting his first points since January 17 against Oregon. When Connor Smith rebounded a missed Giles Dierickx jumper and put the ball back in for his only points of the day, Washington led 86-62 and the nightmare was over.

The win broke a seven game road conference losing streak for the Dawgs. After averaging just 8.5 PPG over his last two appearances, Wilcox broke out of his shooting slump and led all scorers with 23 points. Nelson, below, paced the Beavers with 17 points and eight rebounds. 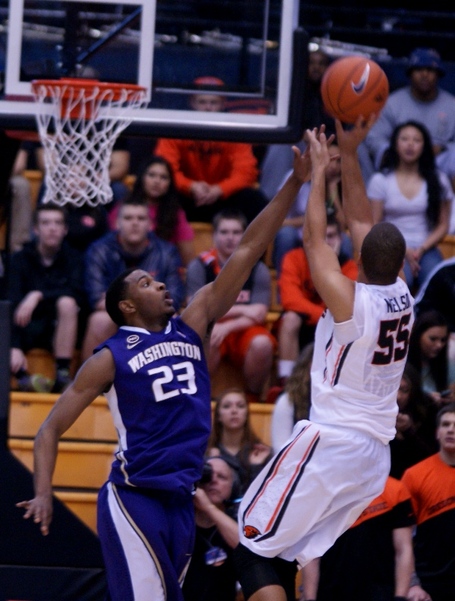 The only other Beavers in double digits were Angus Brandt and Devon Collier, and both were barely there, with 10 points apiece.

The Huskies supported Wilcox with double digit scoring from every other starter, with Andrews' 15 leading the way, plus a 12 point effort off the bench by Blackwell.

The Beavs shot at a 48.1% clip from the field and still managed to get run out of their own gym, an impressive feat. Noticeably missing was Eric Moreland's shot-blocking ability. He is still three away from setting a school record in that category.

For this team to be so badly beat on the boards and outhustled is inexcusable. They have the talent of an upper half Pac-12 team, but nothing is going to change at this rate.

So, where do we go from here? An NCAA Tournament at-large bid is now out of the question, and Oregon State, who dropped to 14-12, and 6-8 in the Pac-12, into a tie for 9th., will have to finish the regular season and Pac-12 Tournament with four more wins to have a shot at the NIT. They could very well still be included in some projected NIT fields come Monday morning, but it's going to be as a seven or eight seed, spots that will disappear once the automatic bid stealers start rolling in two weeks from now.

"The enormity of the moment got to us," said Robinson after the loss.

As bad as this loss was, there will be even bigger moments in the weeks to come, and as a result of today's disheartening performance, there is no more room for these types of lapses.

Up next is a late-night visit to USC on Thursday, a must-win if we want to see a postseason tourney higher than the CBI. Washington improved to 15-13, and 7-8 in conference, and is now in prime position for a return trip to the NIT. The Huskies get rival Washington State in Seattle on the final day of February to follow their split against the Oregon schools.

(Photos in story by Andy Wooldridge)