Beavers in Turquoise Down Cougars 68-57

Oregon St. wore their turquoise-blue Nike N7 uniforms for the second time this season, but it was Washington St. who got the blues, as the Beavers handed the Cougars an 11 point loss.

Oregon St. led most of the way, but never put Washington St. away until the last couple of minutes of the game, and the Cougars had as much to do with it as the Beavers did, turning the ball over 3 times in the last 3 minutes, and missing multiple shots from the field and the free throw line.

Things took a bad turn for Washington St. right off the bat, when D.J. Shelton got his ankle rolled up, in an inadvertent pileup common in football, but relatively rare on the hardwood. Fortunately, though Shelton had to leave the floor for treatment, he was able to return shortly thereafter, and played with minimal lingering affects from what was initially not a pretty looking situation.

The Cougars had their best moments of the game early in the game, but the difference in the first 11 minutes of the game was a pair of 3 pointers by the Beavers' Angus Brandt. The second one started a 10-0 run powered totally by Brandt and Eric Moreland, who had the sequence of the game, with a pin-block on one end of the floor followed by a strong move to the basket on the other end for an effective 4 point swing.

At the same time, Washington St. was suffering a scoring drought over 4 1/2 minutes in length as Oregon St. opened a 27-16 lead.

Junior Longrus finally stopped the Oregon St. run, and started an 8-0 Washington St. one, during which the Beavers had their own nearly 4 minute long scoring drought, and another Longrus jumper made it a 4 point game at the half, with Oregon St. up 30-26.

Brandt had 12 of what would be his team high 16 points in the first half, while Washington St.'s DeVonte Lacy, who missed the first meeting of the season between the Beavers and Cougars with a rib injury, carried Washington St. in the early going, with 9 points.

Langston Morris-Walker opened the second half with a 3 pointer, but Dexter Kernid-Drew answered with one of his own, and it felt like a back and forth shoot-out might be about to unfold. But Brandt took control with a personal 4-0 run, and Oregon St. went on an 8-2 run to reopen a 10 point, 43-33 lead just over 5 minutes after the break.

"He played really well tonight, with 16 points, and has been playing well for us for a while," Oregon St. head coach Craig Robinson said of Brandt. "He is someone that is always in the gym. He doesn't take a day off and you can see that." 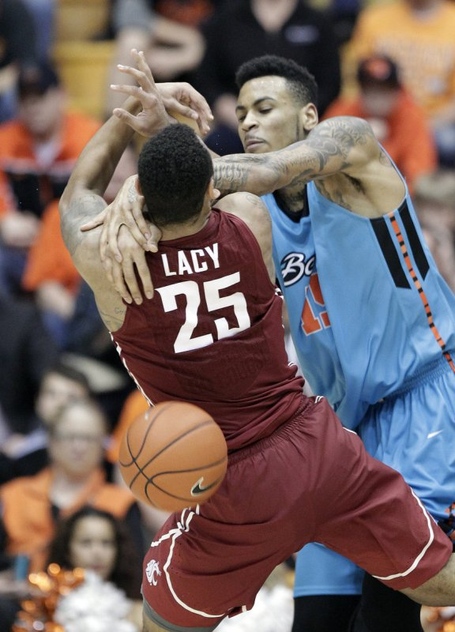 What could have been a turning point in the game came next, as Moreland picked up an inadvertent flagrant 1 trying to defend Lacy, above (AP photo by Don Ryan), which was also his 4th personal foul of the night, but Lacy made only 1 of 2 free throws, and the Cougars then turned the ball over, thoroughly frustrating coach Ken Bone in the process.

Hallice Cooke got his first basket of the night to follow, and though Oregon St. then went cold, so did Washington St., as over 2 1/2 minutes went by with no scoring of any kind.

Considering Brandt also picked up his 3rd foul at the beginning of that stretch, it was the opportunity for Washington St. to get back in the game, but the Cougars weren't able to do anything with the opportunity.

Eventually, Washington St. would creep back within sight of the lead, as Lacy twice cut the deficit to 5 points, first with a 3 pointer, and then with 2 free throws with 6 1/2 minutes left.

But that was as close as the Cougs could get, and the Beavers pulled away again.

Cooke and Morris-Walker strung together 4 straight made free throws before Morris-Walker fouled out with still 4:20 to go, bringing back Moreland in the process.

Devon Collier took a feed from Roberto Nelson to build another 9 point lead, and then followed up a Nelson miss for the basket that made it a 10 point game again with 1:39 left.

The game was billed as a showdown between two of the best shooting guards in the Pac-12, Nelson and Lacy, but that didn't materialize. Nelson jammed his right wrist early in the game in a scrum on the floor, and made only 1 of 9 shots for the night. But he did find his way to the free throw line multiple times down the stretch, and made 10 of 11 from the stripe, to finish with 12 points. The free throws were instrumental in holding the Cougars at bay, though.

They also put Nelson into the 1,600 career point club, becoming only the 5th Beaver all time to do so.

Lacy finished with a game high 18 points, but was only 4 of 12 from the field, getting half of his points from the line as well, on 9 of 13 free throw shooting.

Collier was also in double figures for Oregon St., with 14 points off the bench, and though foul trouble limited Moreland to 6 points, he did have a team high 9 rebounds.

Besides Lacy, D.J. Shelton was the only other Cougar in double figures, and he had 2 of them, finishing with 10 points and a game high 11 rebounds.

A small crowd of 3,618 showed up, and a lot of those filtered in as what was a pretty competitive game all the way began to unfold.

The Oregon St. backcourt eventually combined for 28 points, but got off to a very slow start, with Nelson only scoring 4 first half points, and Cooke totally contained until well into the second half.

Part of that was the Beavers having an sizable inside advantage, with Brandt, Moreland, Collier, and even Daniel Gomis, ganging up on Shelton and little else. But it was also another in what has been a series of contests where neither Nelson nor Cooke can seem to get off to a good start. It's the single biggest thing Oregon St. will need to address if they are to make a late season push for the post-season in some form.

The win improved Oregon St. to 14-11 for the season, and 6-7 in the Pac-12. It also snapped a 3 game losing streak, gave the Beavers their first season sweep of the Cougars since 2006, moved the Beavers into 7th place in the conference, and elevated Coach Robinson, whose total is now 92, to be the 4th winningest coach in Oregon St. men's basketball history.

"That was really a team effort, especially to hold DaVonte Lacy under 25 points; it's hard holding him
under that," Robinson said of the win.