It was Gary Payton night but the Oregon State men's basketball team was only able to show up for one half as the Cal Golden Bears took advantage of a cold shooting and poor defense in second half by the Beavers to make a 25 point turnarond, and ultimately win 88-83.

Share All sharing options for: Tale of Two Halves: OSU loses to Cal 88 to 83

Coach Robinson stays with the starting lineup he worked with against Stanford last Thursday night as Roberto Nelson, Hallice Cooke, Langston Morris-Walker, Eric Moreland, and Angus Brandt all get the start.   The OSU starters had a tough task to keep in check a red-hot Golden Bears team after Cal's continuing dominance of the other Oregon team Thursday.   The initial chemistry of the starting line-up for Oregon State allowed them to jump to the first lead of the game with a nice assist from Cooke to Brand on the inside.   Cooke then answered a Cal score with a three point field goal, which was answered by Cal then to be countered by a three by the OSU center Angus Brandt.

The first five minutes of the game continued to highlight this back-and-forth offensive play for both teams, but threes by both Nelson and (amazingly) Moreland allowed the Beavs to go up 14 to 9 at the 15:13 mark, and OSU was able take a 14 to 11 lead into the first media timeout.  Out of the break the Beavs were able to get Brandt to hit an open jump shot to go up 16 to 11.

The Oregon State bench then starts to make their appearances with Daniel Gomis and Devon Collier coming in to rest Brandt and Moreland, and a bit later Malcolm Duvivier and Challe Barton come in to give Nelson and Cooke a break.  The Beavs though are able to sustain their impressive first half play and build the lead to 24 to 17 at the 8:55 mark with a Gomis basket off a Collier assist. 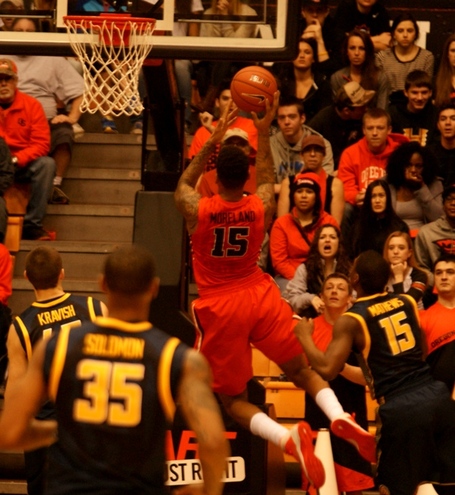 The Beavs continue to control the inside game, with Moreland, above, well on his way to a double double early, and got the lead to double digits at 28 to 18 with a strong inside basket by Brandt.  Cal though finally answers with a key Jeff Powers three point jumper to narrow the lead back down to seven points at the 6:21 mark, but Nelson answers with his own three point field goal to up the lead back to ten at 31 to 21.

The final five minutes of the first half sees Oregon State keep their ten point lead and go into the halftime up 45 to 35.  Cal though was able to make a bit of a run to end the half and keep things close and create some end of the half momentum on a last second Richard Solomon dunk, which all became very important for their second half turnaround.   OSU's first time stats highlight the strong offensive play shooting 63% from the field and making 7 out of 8 three point field goals.   The Beavs were also 4 for 8 from the free throw line and the team combined for 12 assists and 19 rebounds, and only turned it over 5 times.   Cal was able to shoot 48%, 2 for 5 in three point field goals, 5 for 10 from the foul line, had 12 rebounds, and just 2 turnovers.  The leading scorers were  Nelson with 13 points,  Brandt with 9 points, and Moreland with 9 points for the Beavers; and Richard Solomon with 12 points and David Kravish with 10 points for the Golden Bears.  Also impressively eleven different Oregon State players were able to get playing minutes in the first half while building up to a fourteen point lead at times. 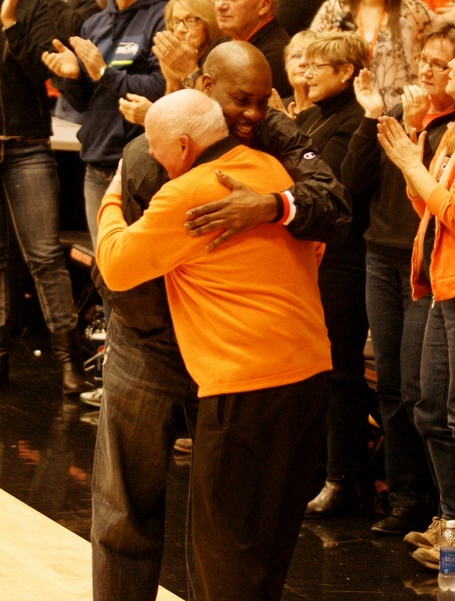 And let's not forget the special night it was in honoring Hall of Fame alum Gary Payton (1987-90).    The Oregon State all time leader in points, assists and steals, Payton, above getting a hug from former coach Jimmy Anderson, was honored at halftime with a highlight tribute video, getting a standing ovation from the crowd of 5,125, and several chants of "Gary! Gary! Gary! over the course of the evening.   Payton was inducted into the Naismith Memorial Basketball Hall of Fame on September 8th last year. 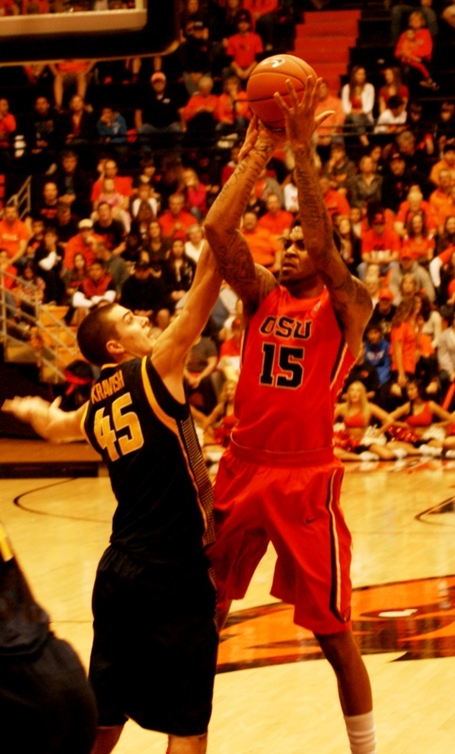 Cal struck first in the second half with a nice hook-shot by David Kravish.  But at the beginning of the second half Oregon State was able to continue to counter Cal's runs with strong inside play by Brandt and Moreland, above shooting against Kravish's defense.

Cal though started to chip away at the lead though with sloppy play by the Beavs contributing, and at the 16:28 mark a Tyrone Wallace's lay-up cut the lead to three points, 48 to 45.

The teams then follow the pattern from early in the first half by exchanging points.   Oregon State was able to stay even initially by getting the foul line with their frontcourt mismatches, but Justin Cobbs cut the lead to two points with a three point jumper and Cal was able to take the lead at the 14:11 mark 53 to 52 with an offensive rebound on a free throw miss. 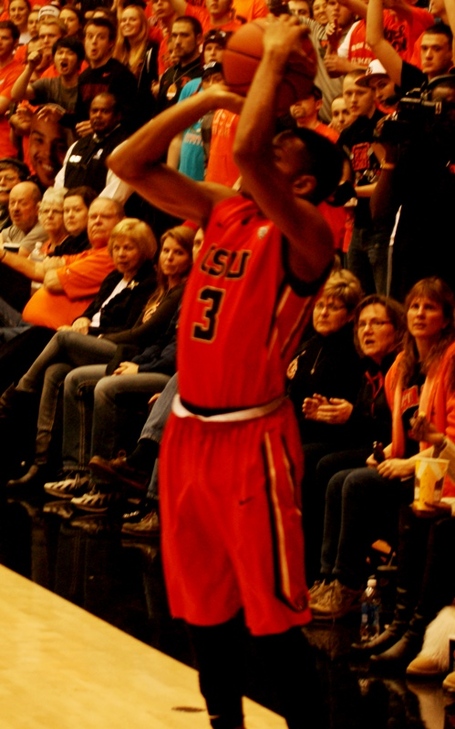 The freshman Cooke was able to amp up the crowd with an important three point field goal, above, to slow down the Cal momentum and up the Oregon State lead 57 to 53.  The slow down of Cal was brief as Coach Montgomery draws up a nifty play out of a time out and then after a defensive stop Jeff Powers hits a three point field goal to cut the Beavs lead to one point at 59 to 58.  Cobbs then scores his 11th point of the second half to give Cal another lead at the 11:05 mark.

Oregon State hot first half shooting cools off as the second half continued on, all of which allowed Cal to make another scoring run to take a nine point lead at the 8:11 mark.   Oregon State went without a field goal for over five minutes, but was able to keep it close enough to make their own run to cut the Cal lead to 7 points at the 5:51 mark with a couple of Brandt free throws.   But the offensive slump plays completely into Cal's strong offensive second half, and Cal was able to hit key shots down the stretch and earn some close charging calls against the Beavs.  In the end Oregon State loses a disappointing game 88 to 83. 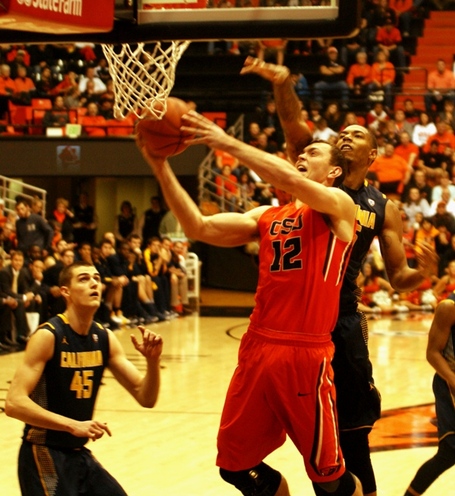 Roberto Nelson led the Beavs with 23 points followed by  Brandt, above scoring against Soloman, who had another strong game at Gill, with 22 points. 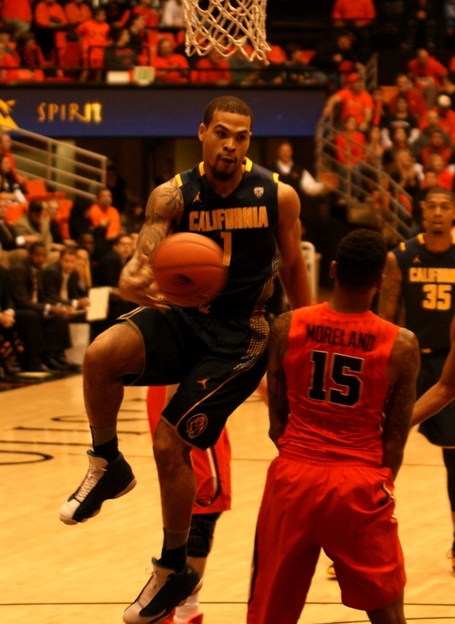 The Golden Bears were led by Cobbs, above,  with 20 points (all of which coming in the second half), Tyrone Wallace with 17 points, and David Kravish with 16 points.  Cal goes to 3 and 0 in conference play for the first time in 57 years, and 12 and 4 overall, and will play Washington Wednesday night.

It was a night to celebrate history, but it was also a disappointing night in terms of the Beavs not being able to sustain their strong first half play in the second half.   The numbers illustrate the difference dramatically as Oregon State shoots 63% in the first half but only 37% in the second, and combined with the Oregon State defense not being able to stop Cal in which the Bears score 53 second half points versus only 35 in the first half.   Nelson was completely held in check in the second half and if it was not for getting to the foul line the Beavs would not even had the glimpse of a chance that they did at the end.

California's getting off to a 3-0 start in conference, after also beating Oregon is especially significant, as the Golden Bears head home with 1/3 of their conference road schedule out of the way, and haven't played a Pac-12 game at home yet.

Oregon State (9-7, 1-3) will need a strong bounce back next Sunday at 5:00 pm for the first installment of the men's basketball Civil War match up against the Oregon Ducks.  The game will be played at Gill Coliseum, and the hope is that the men can build on the OSU women's basketball 88 to 80 win over the Ducks today.