Oregon State star Gary Payton has been named to the Naismith Memorial Basketball Hall of Fame. Payton played at OSU from 1987-1990 leaving behind the records for points, field goals, three-point field goals, assists, and steals (and Payton's steal record still holds today), before going on to have an All-Star career in the NBA for the next seventeen years.

Payton is a unanimous selection in his first year of eligibility.

During his college career in Corvallis, Payton (“The glove” ) was a star under Coach Ralph Miller. Payton's accomplishments were numerous including such highlights as: the 1987 Freshman of the Year; a 1990 consensus All-American; being nominated the Pac-10 Player of the Week nine times; and being named to the Pac-10's All-Decade Team. Payton also led the Beavs to three NCAA appearances and one NIT appearance, and in 1996 was elected to the Oregon Sport's Hall of Fame. 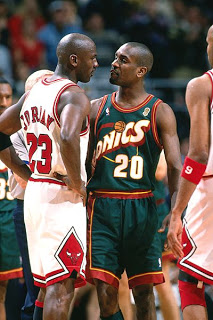 Not one to ever back down from some good talk on the court, OSU great Payton was the second overall round pick in the 1990 draft going to the Seattle SuperSonics, where he played until 2003. During his time as a SuperSonic he ended up with the Sonics record for points, assists and steals. He then bounced around from the Milwaukee Bucks, Los Angeles Lakers, and Boston Celtics; until Gary finally landed with the Miami Heat team in 2005 where he won his first NBA Championship in 2006. He retired in 2007 with another slew of accomplishments such as voted to nine-time All-Star teams, was a nine-time All-Defensive player first team player (including being the 1996 Defensive Player of the Year). And not to be overlooked Payton also won two Olympic gold medals in 1996 and 2000.

By the end of his career, GP also showed another side.. Longevity. Payton retired as one of the top 10 all time in games and minutes played. His impressive career averages also included 46% shooting 32% 3-point percentage and 6.7 assists.

Now a popular broadcaster, he continues to work in the community. The Gary Payton Foundation raises funds for children’s charities and HIV research. (Oregon Sports Hall of Fame)

There is a much more in-depth story to be told about Payton's all-star OSU career and next week I will profile in some more detail Gary's years at Oregon State.