Week 1 College Football Schedule: What To Watch To Maximize Your Viewing Experience

Share All sharing options for: Week 1 College Football Schedule: What To Watch To Maximize Your Viewing Experience

75 games featuring at least one FBS team will be played on the first week of the 2013 season, and as much as you may like to, you can't watch them all. This post breaks down the must-see ones to the games that require a brief score check every now and then.

Note: This post is written from the point-of-view of the average fan, with no team allegiance. Obviously, bump your team to the top of the must-see list and proceed from there. All game times are Pacific and to be played on Saturday, unless otherwise noted.

MUST SEE TV (Skip the wedding, funeral, or your child's birthday party if that's what it takes to watch this one.)

North Carolina @ South Carolina (Thursday, 3:00 PM, ESPN) - In one of the better season-openers in recent history, an underrated North Carolina team visits the rival Gamecocks. The biggest storyline is seeing how defensive end Jadeveon Clowney will perform coming off his terrific junior season. And, oh yeah, football's back! 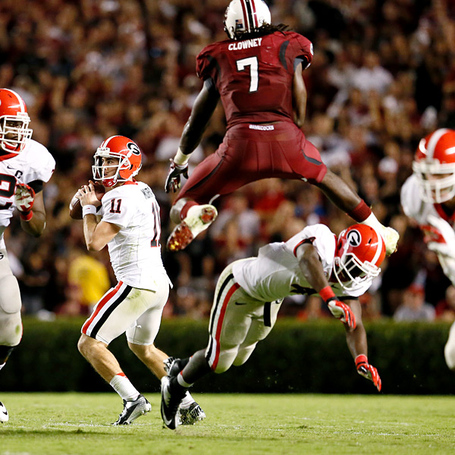 College Football Fans Get To Watch The Top Defensive Player In The Country In The First Game Of The Season (credit: Kevin C. Cox)

Georgia @ Clemson (5:00 PM, ABC) - There's the games of the week, and there's the GAME of the week. Georgia-Clemson is that one. The winner has a place in the top five and is an immediate front-runner in the title chase, while the other starts the year at 0-1.

LSU vs TCU (6:00 PM, ESPN) - Classic trap game for the Tigers to open the year. I think quarterback Case Pachall returns with flair and puts up points against a great LSU defense, but the question is, can the Tiger offense put up enough in response?

LAST BUTTON (Have these games available at the click of a button. These are the ones you turn to on commercial.)

Mississippi @ Vanderbilt (Thursday, 6:15 PM, ESPN) - This is ESPN's nightcap for opening day. I like both of these teams to surprise this season in the SEC, but that means one of them gets a tough loss from the outset. Give me the Commodores with the home field advantage.

Alabama vs Virginia Tech (2:30 PM, ESPN) - A great matchup in regards to the name of the program, but the Crimson Tide should win this by two touchdowns. At least. But it is the Chick-fil-A kickoff game, always an entertaining one. 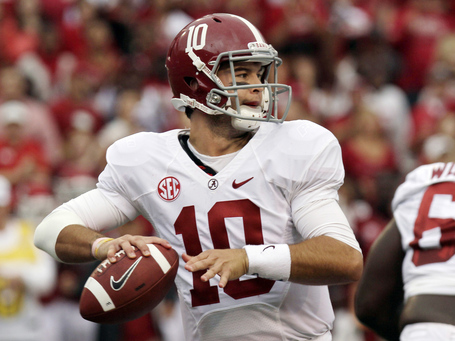 If Alabama Is To Win A Third Straight National Title, The Crimson Tide Need Senior Quarterback AJ McCarron To Lead Them There. (credit: Danny Johnston)

Florida State @ Pittsburgh (Monday, 5:00 PM, ESPN) - One of the few week one games involving a road favorite. The Panthers are going to have a better year than most think, but while they should compete hard with visiting FSU, it's tough to project a Labor Day victory for Pitt. Great game to end the week.

KEEP AN EYE ON (When your first two choices are both in a timeout, or one falls victim to halftime or a blowout, this is your list.)

BYU @ Virginia (12:30 PM, ESPNU) - Two teams that I'm very interested in this season meet on the first week. BYU has a great schedule that will test the Cougs nearly every week, and we get to see the Cavaliers face a quality opponent a week before hosting Oregon. Taking the Hoos in a mini-upset.

Syracuse vs Penn State (12:30 PM, ESPN2) - Weird things happen at MetLife Stadium, and they play host to a fun neutral site matchup here. Many think the second year of the Bill O'Brien campaign will be even more successful than his first, and while I don't necessarily agree with that, I'm taking the Lions here.

Mississippi State vs Oklahoma State (12:30 PM, ABC) - This rounds out the special kickoff games, with this one titled the "Texas Kickoff". I love the Cowboys this season and think they beat up on the Bulldogs, but it's an SEC-Big 12 matchup, on a neutral field, on the first week of the year. Crazy things can occur. 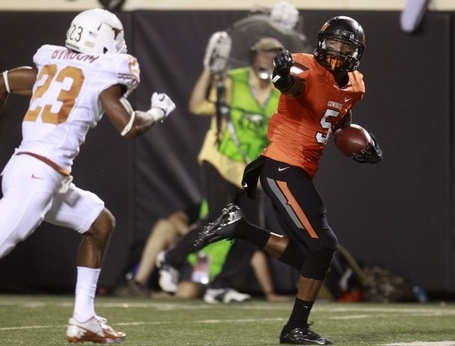 Northwestern @ California (7:30 PM, ESPN2) - I'm picking both teams to disappoint in 2013, but I think Cal pulls the upset at home. How will freshman quarterback Jared Goff perform in front of a national TV audience? Can Brendan Bigelow electrify like he did at times last year?

CATCH THE FINAL MINUTES (Make sure you know what channel these are on so you can watch the final drive or two.)

Utah State @ Utah (Thursday, 5:00 PM, Fox Sports 1) - The Aggies upset Utah at home last season in what was one of the more fun Utah games to watch (except the triple field rush Holy War, of course). The Utes will attempt to exact their revenge on opening night in the FS1 college football debut. This should be a fun to view while ESPN's games of the night are on commercial.

USC @ Hawaii (Thursday, 8:00 PM, CBS Sports Network) - Great way to end opening night, and you can even watch this one exclusively once Ole Miss-Vandy finishes. For Beaver fans, it's also a great scouting opportunity as the Rainbow Warriors pay a visit to Reser Stadium in nine days, and the Trojans will be in Corvallis on the day after Halloween. SC is a big favorite even without starting running back Silas Redd making the trip to the Islands, but expect Hawaii to keep it close for at least the first 30 minutes.

Rice @ Texas A&M (10:00 AM, ESPN) - Just got a bit more interesting with sophomore quarterback Johnny Manziel's first half suspension for the Aggies. TAMU should still win handily, but it's an odd change of plans as the reigning Heisman winner will likely be playing during a blowout.

Washington State @ Auburn (4:00 PM, ESPNU) - Really like the Cougars to pull the upset in this one. Washington State will improve significantly in year two of the Mike Leach experience, and Auburn nearly always performs poorly in its first game of the season. 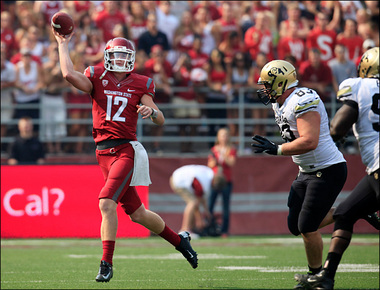