Riley Makes Some Decisions, But Not The Big Ones

Share All sharing options for: Riley Makes Some Decisions, But Not The Big Ones

Oregon St. head coach Mike Riley put off the question of the season before anyone could even ask it after practice Monday, continuing to not make a choice between Sean Mannion and Cody Vaz about who should start at quarterback against Eastern Washington next week in the season opener. It was an interesting, if not down right surprising (or would be if it weren't coach Riley), lack of a decision, given that today marked the transition from general pre-season preparation to preparations focused on the next opponent.

Riley did announce at least some of his decisions regarding red-shirting freshmen, though even here he continues to be non-committal about the biggest decision.

Riley announced that CB Dashon Hunt, S Brandon Arnold, and LB Darrel Songy will definitely play, but he's still got WR Victor Bolden and OL Sean Harlow "on the bubble". Riley also noted that a couple of more players will still be added to the team. Right now, there are 103 players, and they will get to the 105 player limit. The non-arrival of some JC transfers that would have filled slots ultimately open spots for walkons who would have grey-shirted.

The Songy LB decision is a no-brainer, due to the lack of depth the Beavers have at that spot, but the sheer number of secondary players on the roster with athleticism and more experience makes the decisions about Hunt and Arnold a little more surprising, given that neither has been a clear standout in pre-season practices.

The Harlow decision is another choice forced by the lack of depth on the offensive line, and the fact that Harlow has shown promise at the LT position, not a spot usually successfully associated with an inexperienced player. Riley will likely try to not use Harlow if he can avoid it, and if the offensive line can stay mostly healthy (and presumably effective), Harlow could still be red-shirted if the Beavers can get through the season. But as Riley said, Harlow will stay up with the varsity, and if there is an emergency, they will use him.

As offensive line coach Mike Cavanaugh has pointed out, Harlow is going to have to be ready to go on a moment's notice (or less), should someone go down.

What's more surprising is the deferring of the decision on Bolden. Riley and others share concerns about how much action the lightning quick Bolden might see, being behind Brandin Cooks, and Riley rightly only wants to not red-shirt freshmen if they are going to not only play, but play significantly. 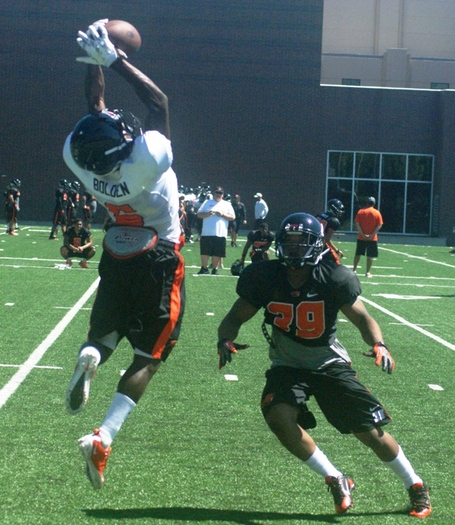 But speed trumps all else in today's football, and Bolden, above, brings that to the table. On special teams alone, where Oregon St. essentially did not have a kickoff return threat last season, Bolden would be a big upgrade.

As much as most in Beaver Nation like most of the players on the roster, its incumbent on the coaching staff to put the best players on the field, and in a position to make a difference. Bolden is one of those players.

John Canzano raised an interesting thought about the quarterback competition in his column this evening, that Riley could be stringing out the process to in some way keep Mannion from "checking out", both mentally and literally, with Vaz being his preferred choice.

Canzano never needs facts to support a notion he advances, and rarely even allows them to murk up the picture, but his contention that Mannion could choose to transfer and play immediately next year, since he's on track to graduate this December (making him eligible to do so, aka Russell Wilson), is possible.

Plausible is another matter, given that Riley has already sacrificed any chance to salvage a season once in order to play Mannion, and to the point that even in out of reach interception festivals, Vaz never even got a mop up hand off.

Could Riley have really made a decision to go against both evidence in practice (Mannion again today out-shown Vaz; more on that in a moment) and popular sentiment (Mannion, who was elected a team captain, was also the over-whelming popular choice when we asked that question this weekend)? It has happened before, and not always with the best of results.

Even Canzano admits there's no evidence that Mannion is even considering such a move, but then more of Riley's quarterback recruits have left the program prematurely in the last 3 years than have started.

As far as practice went, the only significant absentees were LB D.J. Alexander, as expected, being on a week to week basis with a sprained right knee, and C Isaac Seumalo, who also has a sprained knee, though not thought to be as serious as Alexander's. Seumalo's knee required being wrapped in ice today though, and it was evident it wasn't just to be the high heat on the Prothro practice field artificial turf. Its still 12 days till the Eagles fly into Reser, but if Seumalo is still limping around at the end of the week, the nervous meter will go up.

It's always interesting when a team starts working against what they expect an opponent to do instead of against themselves, and even moreso when its Oregon St., given their schemes are generally both vanilla and not what most teams are running.

Today was no exception, and underscored both the importance of Seumalo's absence, and the quarterback call. Eastern Washington runs an interesting version of a 4 man front, where one DT is normally over the center, more like a 3 man front, but also with a wider than usual split, rush end. Seumalo makes the offensive line calls, and has to in this scenario also block a lineman square up.

That becomes even more complex when the defense brings multiple blitzing linebackers. Today, several times when the Oregon St. scout team (third stringers here) did that, it was troublingly effective at times, largely because the offensive line seemed unsure of who should do what about it. 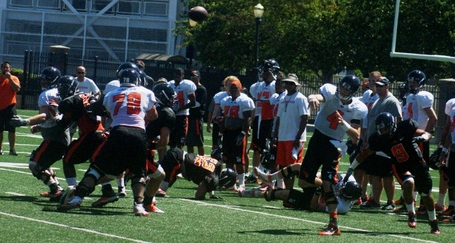 Which leads to the quarterback issue. Mannion, above, demonstrated a good command of the ability to decide when it was "time to get rid of this ball no matter what", whether that was 2.5 seconds into a play of 7, whereas Vaz seemed to be too patient. Its impossible to tell if that was an experience thing, a visibility thing (Mannion's several inches of superior height is something that can't be discounted, or something else. But one thing we've learned is Oregon St. can't succeed if Vaz starts taking many sacks.

Riley has stated he's going to need both Mannion and Vaz this season, and since most Pac-12 teams have to make an unplanned quarterback change under fire at some point in most seasons, odds are he's right.

But delaying a decision on a starter won't change that, or whether Mannion can move on after the season. It's time to "Rock 'N Roll" coach; Oregon St. can't afford an off performance in any of their must win early season games.

And 3 and outs while sorting it out won't cut it; an eye on the defense's preparations against the offensive scout team suggests a LOT of short and mid-range multi-look stuff is coming, which has a tendency to take time off the clock, and possessions away from the opponent.

Oh, by the way, a couple of wide receiver bubble screens, an old nemesis of Mark Banker's defenses, were effective today as well, even with "3s" and "4s" running them.

So don't count on beating the Eagles 19-13; these Beavers are better off in at least 10 games this year if they are over the over/under on total points.