Visiting Coppin St., from Baltimore and the Mid-Eastern Athletic Conference concluded their season opening west coast tour with a 5 point win that spoiled Oregon St.'s season opener. It looked like basketball, and sounded like basketball, but while it was interesting and competitive, it wasn't basketball that can win in the Pac-12.

Three point shooting was the story of the game. The Eagles hit 3 consecutive 3 pointers 2/3 of the way through the first half to break open a tie game, and never trailed again. In a string of 6 consecutive 3 point shots, 4 of which Coppin St. made, the 3 in a row by Andre Armstrong, Christian Kessee, and Arnold Fripp, opened a 22-13 lead.

Meanwhile, Oregon St. shot 1 of 11 from 3 point range in the first half, which were way more attempts than head coach Craig Robinson wanted against a shorter opponent the Beavers knew would commit to a zone defense, and encourage exactly what happened. 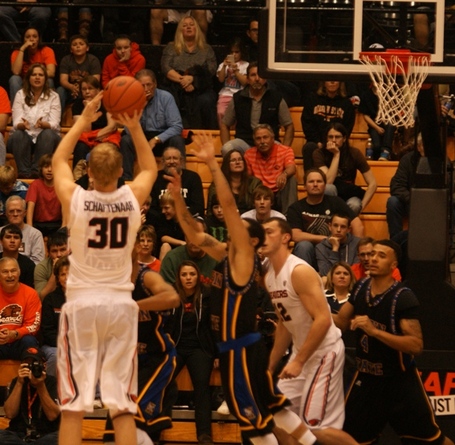 Continuing the theme of 3 pointers, Olaf Schaftenaar made a couple of 3s in the early portion of the second half to keep Oregon St. in the game, but the Beavers didn't get as close as 2 points until Roberto Nelson nailed a 3 pointer with just over 8 minutes to go, pulling Oregon St. within 57-55.

But Sterling Smith sank a 3 pointer on the other end, and the Eagles continued to hold the Beavers at bay.

Nelson's layup with 5 1/2 minutes left on the heels of an Angus Brandt putback pulled Oregon St. back into it, down only 1 point, and getting the crowd of 4.062 that was bolstered by 1,000 free Beaver Dam t-shirts for students and numerous coupons for free admission into it.

It was as close as Oregon St. would get though, as Nelson missed a layup that would have put the Beavers ahead, and Coppin St. reopened their lead to 8 points. 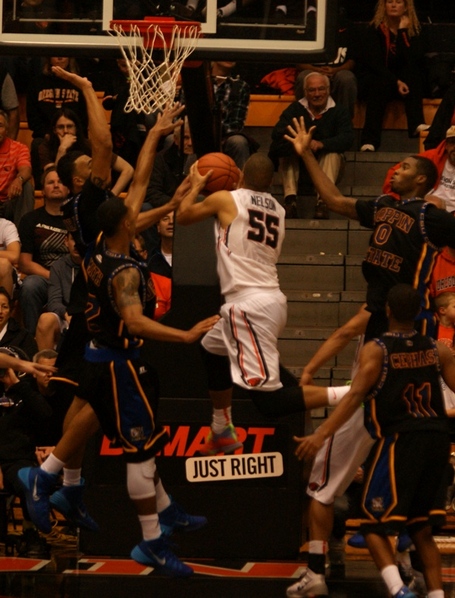 Oregon St. rallied again, and Nelson, above, would again score to pull the Beavers within 2 points, down just 70-68 with 1:10 left. The basket gave Nelson a game and career high 36 points.

But even east coast Coppin St. knew the patented way to beat the Beavers if an opponent has a reliable 3 point shooter. Get the game close, then work the ball around for most of the shot clock. As the clock winds down, rotate that 3 point gunner out to the corner, then push the ball hard inside. Doesn't matter if its with a pass on on the drive; just make sure the ball is in the hand of a good passer, which in the case of Coppin St. was anyone they happened to put on the court.

That passer kicks the ball out to the unguarded shooter on the perimeter. In this case, it was Smith, who was already shooting .500 from 3 point range for the night, having hit 3 of 6. Smith of course buried the uncontested 3, giving him a team high 21 points, and opening the 73-68 lead that put Oregon St. in position to have to foul.

Several members of the Beaver Dam were the closest representatives of Oregon St. to Smith when he lofted the shot.

Daquan Brickhouse, who had 4 points up to that point, put 5 consecutive free throws down, and the Eagles had their first ever win over a Pac-12 opponent, after 17 previous unsuccessful attempts.

Coppin St. improved to 1-1, after dropping an 83-64 decision to California Friday night in Berkeley, while Oregon St. stumbled out of the gate to an 0-1 start.

The Beavers continue their season Wednesday night, when Portland comes to town. Oregon St. will get Devon Collier back from a suspension for a violation of unexplained team rules in the off-season, and they will need the offensive boost.

Besides Nelson, only Angus Brandt and Victor Robbins were in double digits for the Beavers. 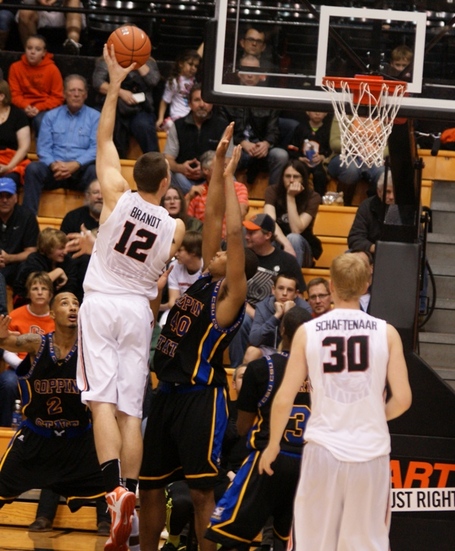 Brandt, above, struggled in the first half, but showed leadership and persistence in the second half, but finished with just 13 points. Brandt also led Oregon St. in rebounding, but only needed 7 to do so.

Robbins finished in double digits for the first time in his collegiate career, with 11 points, and showed brief flashes, but also disappeared for extended stretches. Robbins needs to remain aggressive.

Schaftenaar had a half-dozen rebounds, all on the defensive end, and also a pair of steals, playing his best defensive game as a Beaver. But the pair of 3 pointers were the only shots he made of the 8 he took, all 3 pointers.

Jarmal Reid is a total offensive liability, and didn't even record a shot, drawing a foul the only time he put the ball up in the 20 minutes he played. He missed both free throws that resulted. 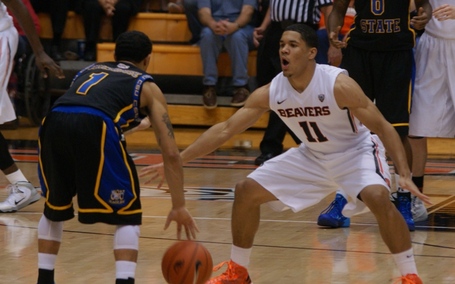 And surprisingly, Malcolm Duvivier, above, who had 17 points against Concordia in Oregon St.'s last exhibition, was also a non-factor offensively. Duvivier played with energy and movement defensively, but only took 1 shot in 15 minutes.

The Eagles also out-rebounded the much taller Beavers 40-36, as Oregon St. returned to another bad old habit, especially early, of launching shots with no one within 10 feet of the rim to rebound.

Collier's return should help, but tonight Oregon St. was out-classed by a mediocre member (Coppin St. is coming off an 8-24 campaign, after a 14-16 season 2 years ago) of a mediocre conference. 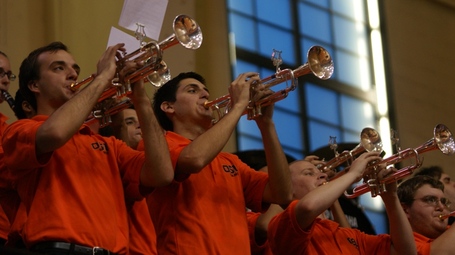 At least the band sounded good.