Beavers Beat Back Bulldog Rallies In Both Halves

Share All sharing options for: Beavers Beat Back Bulldog Rallies In Both Halves

Oregon St. opened a large leads in both halves of the game, only to have Mississippi S.mount rallies that erased almost all of those leads, pulling within 2 points just over 4 minutes before half time, and then as close as 4 points with 4 1/2 minutes left in the game. The Beavers were able to withstand both Bulldog runs though, and rebuild larger leads, going up 7 points at half time, and ultimately pulling away for the 59-49 win.

Initially, it was as much about Mississippi St. starting slow in an unfamiliar arena against an unknown opponent as it was Oregon St. starting hot, but the Beavers went on a 14-0 run after an initial 2-2 tie to take their largest lead of the first half. Langston Morris-Walker, below, ignited the early Oregon St run, with the Beavers first 7 points of the game.

Once the Bulldogs got acclimated, they rallied back, holding the Beavers without a field goal for nearly 7 minutes. Mississippi St.'s Fred Thomas, who finished with a game high 16 points, scored 8 straight points, including back to back 3s, to pull the Bulldogs within 21-18 just over 6 minutes before halftime, and Mississippi St. got as close as 23-21 on a 2 + 1 by Trivante Bloodman at the 4:15 mark. It was as close as the Bulldogs would get, though.

Gary Payton II, held scoreless until that point, got a steal and dunk to stem the tide, below, and the Beavers rebuilt the lead to 30-23 by the break, on a 3 by Morris-Walker, which capped his scoring for the afternoon.

Payton opened the second half with another 3 pointer, for a 10 point lead, and Payton pushed the lead to 13 and then 15 points, as Oregon St. went up 41-26 just over 6 minutes into the second half.

Jarmal Reid, Daniel Gomis, and Cheikh N'diaye combined to run of 6 straight points as Oregon St. opened the largest lead of the game, going up 47-31 with 9 1/2 minutes left. 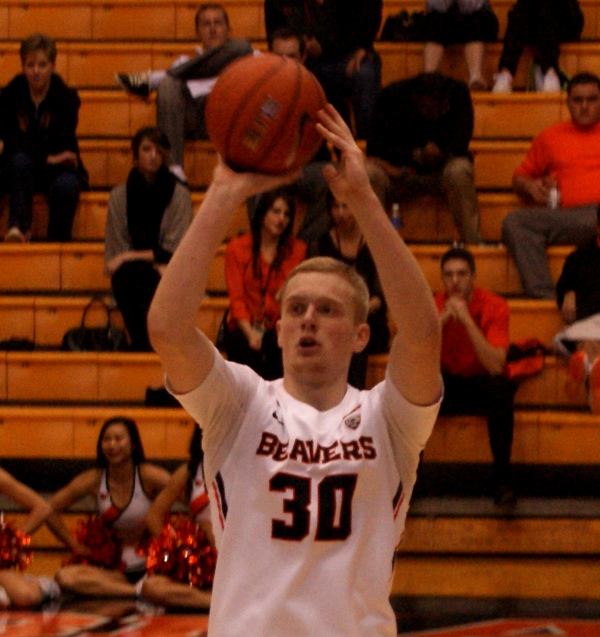 But Malcolm Duvivier and Olaf Schafternaar, above, hit key 3s to salt away the win, improving Oregon St to 6-2 for the 4th season in a row.

The runs the Bulldogs made were a bit concerning, but then the Beavers were in position to trade points for minutes for the entire last quarter of the game, something no one expected of this team.

Payton finished with a co-team high 13 points, but saw his streak of double doubles snapped, as he only had 8 rebounds, though that led Oregon St.

Thomas also had a game high 9 rebounds, to go with his game high point total for Mississippi St., which dropped their 3rd game in a row, and fell to 5-3 for the season. No other Bulldog broke into double digits.

Victor Robbins, who had been Oregon St.'s spark off the bench of late, never got going, and finished with just 4 points, but Reid picked up the slack, with 13 points in 26 minutes off the bench.

Payton struggled to get going almost the entire first half, and Oregon St. will struggle to win without him having consistent production, but it was encouraging that a number of players made key contributions at various times.

"We need to stay focused for 40 full minutes, but it was a good team win," Oregon St. head coach Wayne Tinkle felt.

Schaftenaar and Gomis grabbed 7 rebounds each, and it helped Oregon St. to a 40-34 edge on the boards, and the difference was all on the offensive end.

But Mississippi St. is not a very good team, especially when they step away from Starkeville, as this was the Bulldog's 19th straight loss in true road games.

A small crowd of only 4,211 rattled around in less than half full Gill Coliseum. Coming after the conclusion of finals week thinned out the student section considerably, but it was a still a surprisingly small number, given that it was an actual afternoon game, and not a late night on a week night, and against an SEC opponent, albeit a bottom tier one, in only the 4th visit to Gill ever by an SEC team.

And it was the first chance for most members of Beaver Nation to meet new head football coach Gary Andersen, above, (note he already has a Beaver logoed cell phone) who was hand for the first half, and was introduced at the first media timeout.

Anderson seemed to enjoy himself, but there's no way he confused the atmosphere with anything like even any random pre-season game in Madison. And given how well Utah St. has had their program going recently, not even in Logan.

Oregon St. returns to action Monday night at 7 PM, when the Beavers host Grambling St. (2-5), in a left over from the soft scheduling of the Craig Robinson era.