The new banners that were hung outside Reser Stadium were the big news out of pre-season practice today, as head coach Mike Riley once again headed off questions about the quarterback competition before they could even be asked.

"I've come to the conclusion right now that we wouldn't want to get any quarterback any more turns than they're getting already," Riley said. "We might even have to scale back a little bit. They're doing fine just doing what they're doing. They're alternating each one of them with the one's. There's no need right now today. They're getting all the prep they need."

It was enough to inspire ESPN's Ted Miller to spin the tale about another of Riley's quarterback controversies.

Despite another impressive day, there was also no decision on using freshman WR Victor Bolden or red-shirting him. Bolden is evident as the second best receiver on the team, but we may not learn his future until the opening game against Eastern Washington.

Riley and staff has made a move, bringing one time RB Jovan Stevenson who was converted to CB last season back to the offensive side of the ball. Stevenson will still be a part of some defensive packages as well, and be on some special teams.

Tempo has tapered off of late, and Riley's remarks about not getting the quarterbacks more reps is indicative of no sense of urgency, as Riley is attempting to get everyone, except of course LB D.J. Alexander, who won't be available until a couple weeks into the season due to his knee, ready to go come Monday, when game week preparations and schedule begins.

Riley also said there would be no more scrimmaging this pre-season.

Riley's prognostication yesterday that Isaac Seumalo should return "hopefully for sure by tomorrow" was too hopeful, as Seumalo's bruised left knee kept him sidelined again today, and starting right tackle Gavin Andrews was also missing today, out ill, resulting in a variety of mix and match offensive lines in practice.

WR Brandin Cooks and RB Storm Woods had their shoulder pads on, but the only exercise they got was carrying them around on a humid day.

As a result, beyond Stevenson's move, the biggest news of the day was the hanging of new alumni player banners outside Reser, incorporating the new rodent logo. 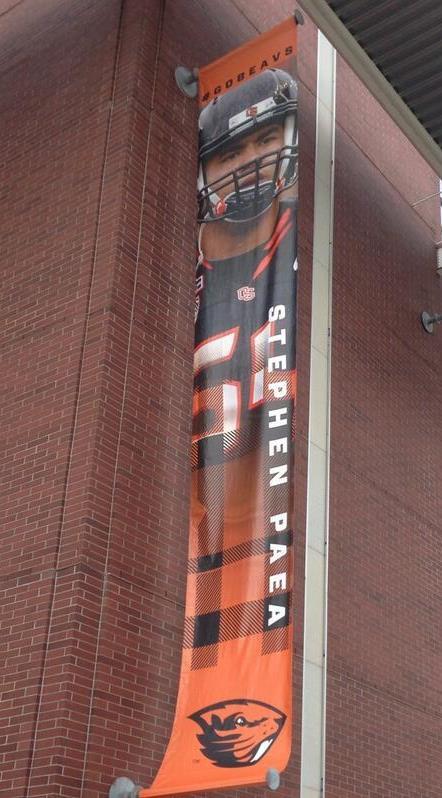 Stephen Paea, above, is the first one you encounter coming around the corner to Parker Plaza, with Jordan Poyer, below, next.

Matt Moore is the "oldest" Oregon St. player in the current crop, with Jacquizz Rodgers and Victor Butler near the club entrance. 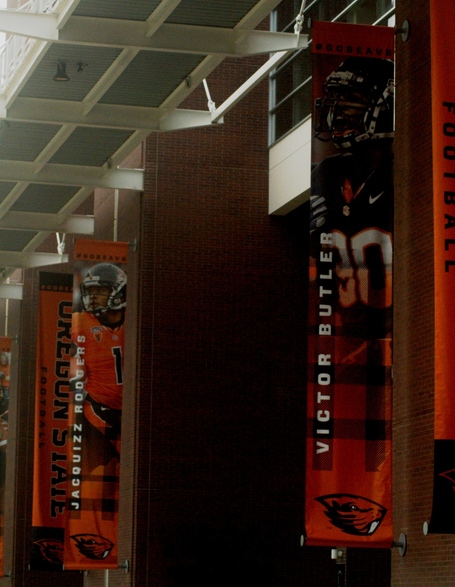 Johnny Hekker replaces Alexis Serna as the kicker representative, above, and Keenan Lewis rounds out the array.