Brandin Cooks is the top player at OSU right now.

Brandin Cooks is a wide receiver extraordinaire for the Beavs. He is in the upper echelon of receivers in the Pac-12, and in the nation actually. Cooks had an average of 88.5 yards per game which was good for 24th in all of the FBS receivers. He was terrific all season, his best play of the year was probably against UCLA when he caught a pass in stride and burned the entire defense.

This is the sort of play that Cooks can do. Cooks is a gamebreaker, at any moment he can break it open for a touchdown and help swing momentum to the Beavers. He was able to get receptions of at least 48 yards in 6 games last season. His 17.5 yards per catch is good for 22nd among receivers at the FBS level, which just demonstrates his explosiveness. He is not a large receiver but his sheer speed and acceleration make up for his lack of size. He has 5 games with 100 yards and 2 games with over 170 yards. 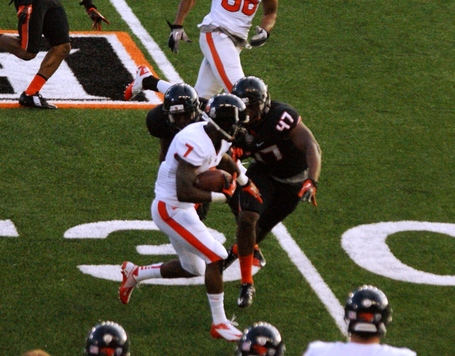 His value extends even further than just as a receiver though, he excelled as a blocker and as a runner. He ran the fly sweep well using his speed and used good vision to make one cut and turn it upfield. He and Markus Wheaton paired up well in the screen game, the two of them blocked exceedingly well to spring each other on the edge. Cooks' willingness to play anywhere for the Beavs only increases his value. 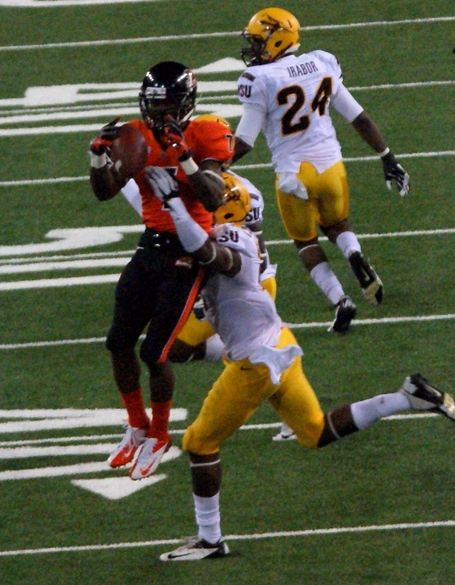 The main factor for Cooks going first over Scott Crichton was the leadership of Brandin Cooks. Brandin leads by example, he leads vocally, and it shows where he was voted a captain for this upcoming season. You can see it in practices as well, he works harder than anybody until Riley decided to get other players some reps. Brandin Cooks is an all-around player and is the superstar on this team. He holds himself well, and in interviews he comes across as intelligent and lively.

Brandin Cooks is a terrific player and from all accounts a terrific person as well. His talent sets him apart, but his other abilities make him shine even more.