"Should I go with Sean, or Cody? Decisions, decisions."

We've been here before; waiting for Oregon St. head coach Mike Riley to make a key decision about who to play, or when, including about who should lead the Beavers. Everyone was looking forward to a decision about now as to whether it would be Sean Mannion or Cody Vaz at the controls when Riley said about a week ago that he hoped to name a starter by the end of this week.

Coach Riley of course reminded everyone today that following today's mid-day practice is not the end of the week, especially with a second practice this evening, and another tomorrow at 11 AM.

Riley did admit he's now "thinking about thinking about naming a (starting) quarterback," and will probably spend the weekend pondering the choice.

(Don't worry about Brent VanderVeen seizing the job as Mannion did from Ryan Katz and Vaz 2 years ago, when he was a freshman; both Sean Martin and Rashaad Reynolds reminded VanderVeen just how fast Pac-12 starting CBs can close on a receiver and a throw today.)

The other question on everyone's mind today was the condition of center Isaac Seumalo's left knee, after he got it balled up in a pileup yesterday. Seumalo didn't practice today, and had a soft brace on his bruised knee. The good news is he wasn't evidently still in pain, and the expectation of the training staff is that a little rest will resolve the matter. In the meantime, Roman Sapolu is filling in with the first string.

One player who has been out (again) who returned to action today was Reynolds, and it looks like he is ready to set aside questions about not only his status, but the entire secondary. Reynolds not only took reps with the "1s", but with the "2s", and the "3s", and appears to have "taken command" of the entire position group.

It also appears that Micah Audiss is taking command of the 5th DB spot in the nickel, along side Tyrequek Zimmerman and Ryan Murphy, with Sean Martin opposite Reynolds at the other corner. Larry Scott is making a run at playing in dime and some nickel packages as well. 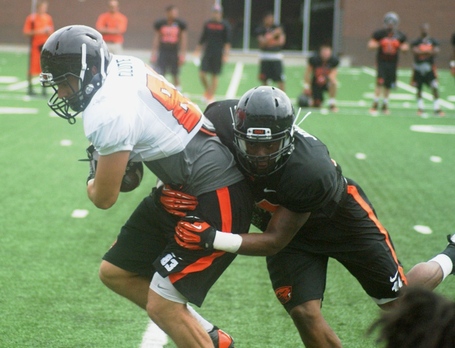 Jabral Johnson, above bringing down Kellen Clute, is settling into the outside LB role temporarily vacated by D.J. Alexander, and Alexander's absence may not be a major concern as long as Alexander's absence doesn't extend too far beyond the Eastern Washington and Hawaii season opening games.

CB Malcolm Marable and WRs Micah Hatfield and J.C. Grim missed practice today, but don't let the lack of reports and tweets about Brandin Cooks be a concern; Cooks simply spent most of practice pouring over charts and taking notes. It appears Coach Riley has decided Cooks has a starting spot sewn up. 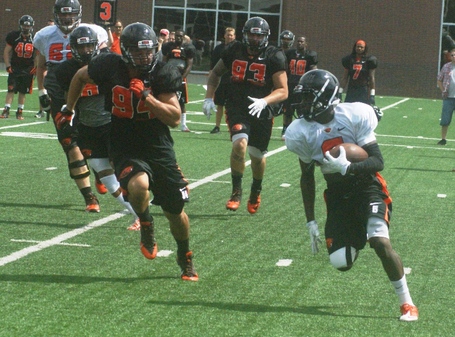 A WR who was back in action today after missing action yesterday was freshman Victor Bolden, above blowing past Devon Kell on a fly sweep. Riley has decisions to make among a half dozen freshmen receivers as to who might red-shirt, but its hard to believe Bolden's speed won't (or shouldn't) get him on the field this season. Bolden has that rare extra gear that few possess, and can't be taught.

It also appears the Beavers defense will go with a "quick" first defensive line, and it will be a 4 man line, with Dylan Wynn at DT, and John Braun and Kell looking like the others to join Scott Crichton in the base defense. Larger options like Mana Rosa and Siale Hautau appear to be for situational roles.

Oregon St. also added a new member to the team, though he won't be seeing game time until next season.

DE Jalen Grimble transferred to Oregon St. after appearing in 15 games over the last 2 seasons at Miami. Grimble is 6'2", and 292 lbs., and was a 5 star prospect according to Scout.com (4 star according to RIvals.com) out of Bishop Gorman High in Las Vegas, and will have 2 years of eligibility left, but must sit out this season per NCAA lateral transfer rules.