Oregon, and Aaron Payne, broke open a tie game in the top of the 9th inning, when Payne drove a 2 RBI triple down the right field line, and subsequently scored on Ryon Healy's fly ball to secure a 6-3 lead in the first battle this year in the Civil War. It was all 16th ranked Oregon needed with Jimmy Sherfy coming out of the bullpen. 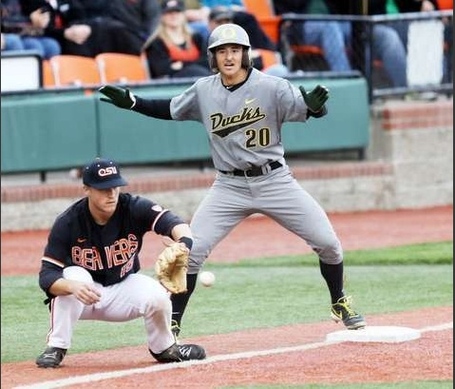 "It was a curveball. He left it over the plate, and I was able to get the barrel on it," Payne said.

Sherfy shut 6th ranked Oregon St. down in order for his 9th save of the season, and the win for the Ducks. 2,722 fans, the third largest crowd of the year for the Beavers, saw what was only Oregon's 2nd win at Goss in 10 tries since the 2009 reinstatement of the Duck's baseball program.

"Whenever you beat a good team under any circumstances, mid-week or weekend, it's a good win," Oregon coach George Horton said.

Pitching was problematical for both teams early on. The Beavers took a 1-0 lead in the 1st, as Andy Peterson and Michael Conforto came up with back to back singles, and Duck starter Jordan Spencer subsequently issued back to back walks to Danny Hayes and Jake Rodriguez.

Oregon St. couldn't capitalize on the opportunity for a big start though, leaving the bases loaded.

It was then Oregon's turn to take advantage of wildness by Oregon St. starter Taylor Starr, who had twice beaten the Ducks last season. Starr hit leadoff batter Scott Heineman with a pitch, and Heineman advanced to second on a wild pitch. After getting a strikeout, Starr sailed another wild pitch that allowed Heineman to move to third.

After hitting Josh Graham with a pitch, Heineman scored to tie the game on a sacrifice. Starr uncorked 2 more wild pitches Rodriguez couldn't corral, and Graham scored to put Oregon up 2-1 without the Ducks having gotten a hit.

Oregon finally did get some hits in the 3rd inning, as 3 consecutive 2 out singles by Mitchell Tolman, Heineman, and Tyler Baumgartner made it 3-1 Ducks.

Oregon St. couldn't capitalize on a double by Dylan Davis in the bottom of the third that ended the afternoon for Spencer, but tied it in the 4th. Kavin Keyes led off with a double, and scored on a single by Jared Casper. Casper subsequently scored on a squeeze bunt by Ryan Barnes to tie the game.

After the erratic start, both pitching staffs settled down, with no further scoring until the 9th.

Tony Bryant went 2 1/3 scoreless innings, taking over for Tyler Painton, who had come in for Starr in the 3rd, but struggled. Brandon Jackson then came on in the 7th, and breezed through the 8th and the first 2 batters he faced in the 9th, but then gave up a single to J.J. Altobelli that opened the door.

Oregon St. coach Pat Casey went to freshman Max Engelbrekt, and it backfired big time. Engelbrekt walked Brett Thomas, and then gave up the game winning triple. Cole Brocker gave up the sacrifice fly for the final run, but it was already a lost cause for the Beavers, with Sherfy waiting in the wings.

Garrett Cleavinger, the 5th of 6 Oregon pitchers, who worked the 8th inning got the win, his first decision of the year, and Jackson the loss, as Altobelli amounted to the winning run, even though Engelbrekt gave up the hit that scored him. It was Jackson's first loss, dropping him to 4-1 for the season.

Oregon St. slipped to 25-6 for the year, and Oregon improved to 24-8. The Ducks will take their 9-3 Pac-12 leading conference record to Berkeley for a weekend series against California, while the Beavers, who are second in the conference with a 7-2 record, will remain at home, hosting Utah this weekend.