Whenever someone says they have the Pac-12 figured out, we get a day like Saturday that proves otherwise.

Having played poorly Thursday in Utah, most thought Saturday's final game of the Pac-12 regular season was probably going to be a sure loss for the Beavers. Especially considering they were playing a Colorado team, at home at 5.300 foot elevation in the Coors Event Center, where the Buffs had won 12 of 14, including a 76-53 win over then conference leading Oregon, that was still playing for a possible first round bye in the Pac-12 Tournament next week in Las Vegas, as well as trying to keep themselves in position for an NCAA Tournament invite.

Oregon St.'s loss to Utah didn't look quite as bad as when the Utes upset the Ducks 72-62, knocking Oregon out of the regular season Pac-12 Championship, and all the way to the 3rd seed in next week's conference tournament. Coupled with California's upset loss to Stanford on Thursday, Utah's win opened the door for UCLA to steal away the top seed in Las Vegas when they won at Washington today.

Still, Oregon St. had never won in 6 prior trips to Boulder, and with a crowd of 10,105 Buff fans on hand for Senior Day, it was a big surprise when the Beavers finally climbed the mountain, ending their regular season with a 64-58 win.

"Once everything settles in, I believe this trip to Salt Lake and Boulder is going to be the toughest one in the conference," Oregon St. head coach Craig Robinson felt. "We decided to acknowledge that; you can't con the guys into thinking there's nothing different about it, and adjust what we did to address that, with a game plan that used our depth. These guys did a tremendous job of sticking to that plan."

Colorado was again playing without Andre Roberson, one of the best rebounders in the country, who is ill with what the Buffs suspect may be mononucleosis. It wasn't a problem in the 23 point win over Oregon, but his absence caught up when the Beavers, and their front line of Eric Moreland, Joe Burton, and Devon Collier, showed up, and pulled down 26 rebounds between them, just 2 shy of Colorado's team total, which was a big factor in the win.

Burton had 4 quick points, and Oregon St. opened a 14-9 lead on a basket by Moreland 8 minutes into the game.

Colorado answered with a 12-0 run though, and it looked liked Thursday's result as well as last season's outcome in Boulder would reoccur. However the Beavers' defense came to life, holding the Buffs scoreless for nearly 6 minutes.

During that time, Burton added another basket, increasing his career total to 1,001 points, which accomplished a couple of major milestones. 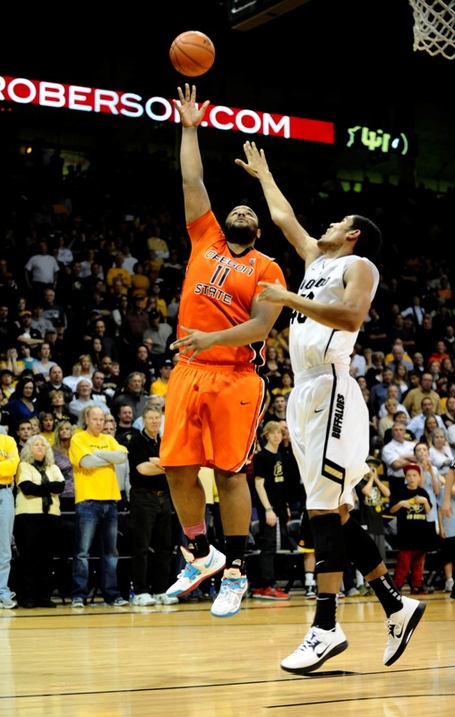 With Collier and Roberto Nelson, this Beaver team joins the 1980-81 team that had Steve Johnson, Mark Radford, and Ray Blume as the only 2 Oregon St. squads that have ever had 3 1,000 point scorers.

The Buffs' Askia Booker knocked down a 3 pointer to end Colorado's scoring drought, and added another late in the half, but Moreland had 5 points in the final minute of the first half, raising his total to 11, and Oregon St. went to the locker room down only 29-27.

In addition to Roberson's absence, Colorado was challenged offensively by the fact that Spencer Dinwiddie, who had been a perfect 11 of 11 against Oregon St. in the team's first meeting in Corvallis, was only 1 of 5 in the first half, and as a result did not start the second half.

The Beavers had their own offensive quandary though, as Nelson, who leads the Pac-12 in scoring in conference games, was held scoreless in the first half.

Nelson promptly snapped out of it though, hitting a 3 pointer to put Oregon St. ahead. Colorado took a 1 point lead 1 time, but a Challe Barton 3 pointer and a dunk by Moreland capped a 12-4 run by the Beavers in the first 3 minutes of the second half to take a 39-33 lead.

But just as it appeared Oregon St. was about to pull away, the Beavers' offense suddenly went as cold as the snow storm going on outside the Coors Event Center, going over 4 1/2 minutes with only a 3 pointer by Olaf Schaftenaar.

But in the 5 1/2 minutes between Moreland's dunk and a Nelson basket at the 11:23 mark, the Beaver defense allowed the Buffs only 6 points, and back to back baskets by Moreland in the 10th minute rebuilt the lead to 8 points, with Oregon St. up 49-41. 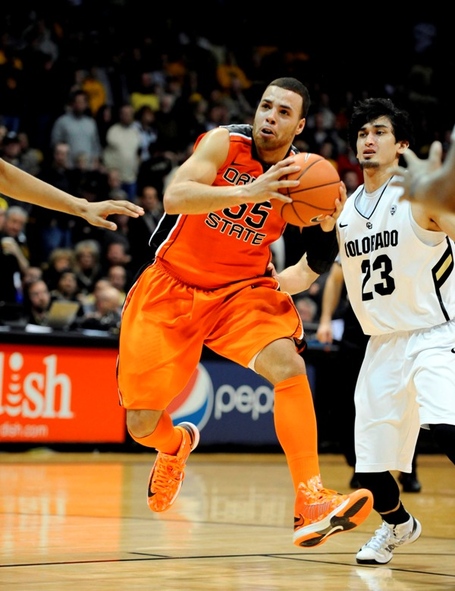 Oregon St.'s Roberto Nelson had all of his 15 points in the second half.

Things looked good for the Beavers at the critical 5 minute mark, as they still led 51-46. Oregon St. has lost every game in which they trailed at that point, but are almost unbeatable when leading then. This was also shortly after Moreland had secured the rebound that ensured him a double double, another event that frequently has resulted in the Beavers winning.

Ahmad Starks, held scoreless up to that point, had 4 points down the stretch, which was quite helpful in offsetting the 3 free throws that Dinwiddie drained when Moreland inexplicably fouled him while shooting a 3 pointer with 28 seconds left, which pulled Colorado within 2 points, down only 60-58.

But Nelson added a layin and a pair of free throws to close out the win, and prompt Colorado coach Tad Boyle to take to the public address system.

Dinwiddie's 13 second half points elevated him to a game high 18 points, but no other Buff was in double figures. 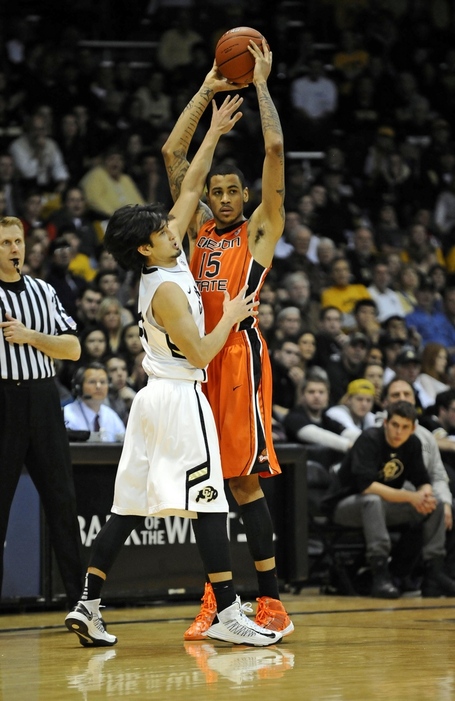 Moreland, above, holding Sabatino Chen at bay from the ball, led the Beavers, with 17 points to go with his game high 10 rebounds, and Nelson finished with 15, all after the break. Burton just missed being a second Beaver with a also achieved a ouble double, with 10 points and 9 10 rebounds, after revised stats crediting him with an extra board were released.

Burton had an uncharacteristically low 2 assists, but one was a big one, a length of the court baseball pass to Nelson for a layin.

The Buffs were also attempting to tie their school record for wins in the regular season.

The Buffs were also trying to tie their school record for wins in the regular season, but instead fell to 20-10 for the regular season, and 10-8 in the Pac-12, which dropped them to the 5th seed, and into the first round of games at the Conference Tournament, which starts Wednesday at the MGM Grand Arena in Las Vegas.

Oregon St. improved to 14-17, and finished 4-14 in conference. Notably, it was the first time this season that Oregon St. has won a game that they trailed in at halftime.

The Beavers will gain the 11th seed in the Pac-12 Tournament if USC beats Washington St. this afternoon. In that event, Oregon St. will face the Trojans at 8:30 Wednesday.

If the Cougars win, Oregon St. will slide to last place in the Pac-12, and rematch with Colorado at 2:30 Wednesday. Oregon St. and Washington St. split this season, but the Cougs have a win over a higher finishing conference opponent, conference regular season champion UCLA on Thursday night, which becomes the tie-breaker.

After winning only 2 conference games prior to this weekend, Washington St. has completed a weekend sweep of the LA schools in the Palouse with today's 76-51 rout of USC, and claimed 11th place in the Pac-12.

As a result, Oregon St. has finished last, and will indeed have a rematch with Colorado.