Baseball Loses A Commit, Football Gets An Expected One

Share All sharing options for: Baseball Loses A Commit, Football Gets An Expected One

Oregon State lost a baseball commit, when Brandon Martin from Corona, CA, an infielder selected by Tampa Bay with the 38th. overall pick in this year's MLB draft, signed with the Devil Rays. Martin, a .300 hitter, was the first player that had signed a letter of intent for the 2011-12 year that Coach Pat Casey and the Beavers lost to the pros. 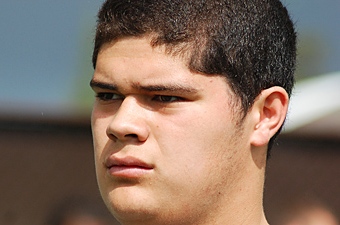 The younger Seumalo stands 6'3", and weighs in at 280 pounds. Rated a 4 star recruit by both Scout .com and Rivals.com, he is being looked at for the offensive line at Oregon St., after being named an all conference first team player on both defense and offense last year in the Mid-Willamette League, and was the league Defensive Player of the Year in 2010.

Seumalo is Oregon St.'s 6th recruit for the 2012 season, and the Beavers' second 4 star recruit. Scout.com rates Seumalo as the #9 prospect nationally at offensive guard. He had other offers from Arizona State, Boise State, Oregon, Stanford, UCLA and Washington.