Share All sharing options for: Washington Rides Wroten To Wire To Wire Win Over Oregon St.

While much of Husky Nation was watching their football team get out-scored 67-56 by Baylor in a Valero Alamo Bowl game that produced a basketball-like score, the Washington basketball team was riding a scoring spree of its own, sparked by Tony Wroten's 26 point, 9 rebound night, to a 15 point win over Oregon St. to open the Pac-12 hoops season.

Washington jumped to a 6-0 lead in front of a near-capacity crowd of 9,592 at Alaska Airlines Arena, who stayed after the game to watch most of the second half of the Alamo Bowl, and led wire to wire in upsetting Oregon St., who entered the contest tied with Stanford for the best record in the Pac-12 after the non-conference part of the season.

Wroten was the game's high scorer, and one of six Huskies in double figures. C.J. Wilcox came off the Husky bench to add 15 points, and both Abdul Gaddy and Desmond Simmons added 13 points each.

"He is darn good," Oregon St. coach Craig Robinson said of Wroten. "That is why everyone had him being one and done. He is strong, and he has a good way about him, even though he is young. He has a mature way about him. He is going to be good in this league."

Oregon St. only got only 4 players into double digits, led by Joe Burton, who hit 9 of 12 shots, for 18 points. Coupled with 16 by Angus Brandt, who entered the game as the Pac-12's leading percentage shooter, the Beavers had an effective inside scoring effort. But Brandt was only 7 of 12, and the third position of the front court lagged. as Devon Collier had only 8 points, and Eric Moreland none.

"Sooner or later, there's going to be a leak somewhere, and tonight the leak was with Brandt and Burton," Washington coach Lorenzo Romar said. "I thought we did a good job on Cunningham and Starks, but they have so many weapons it's hard to contain all of them."

Jared Cunningham finished with 15 points for the Beavers, and Ahmad Starks added 14.

Washington outplayed Oregon St. for most of the first half, and opened a 20 point, 40-20 lead 5:40 before the break on Gaddy's layin. A 13-4 run started a Beavers rally, and layups by Cunningham and Roberto Nelson in the last minute before the break pulled Oregon St. back within 11 points, trailing 50-39 at halftime. 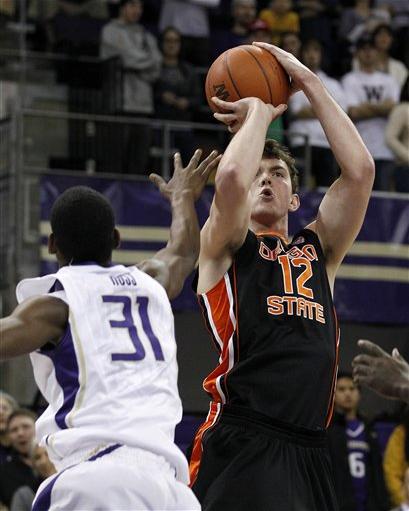 Brandt, above, hit a three pointer that got the deficit back into single digits 2 and a half minutes into the second half, but Washington was able to hold Oregon St. at about that distance for most of the second half.

Aziz N'Diaye opened a double digit 77-66 lead again with just over 7 minutes left, but the Beavers rallied with a 14-6 run, capped by a Starks 3 pointer that pulled Oregon St. within 83-80 with still 2:55 left. But it was the last points the Beavers would score, and the Huskies pulled away with a 12-0 run, as Wilcox and Wroten combined for the next 8 points.

"We went zone, I think at the 2:12 mark is when we went to zone," Romar explained. "I think that helped take time off the clock, and forced them to take perimeter shots. For a while there, it was difficult for us to get stops. I thought the zone helped us down the stretch. There is nobody that they put on the court that can't do something offensively."

Free throw shooting accounted for a large part of the difference, as the Huskies shot 85% from the line, knocking down 17 of 20, while the Beavers were only 9 of 17, 53%, at the line. Coupled with good ball security by the Huskies, who suffered only 9 turnovers, due largely to the Beavers getting only 6 steals, Oregon St. could never get control of the game.

Washington shot only slightly better than Oregon St. from the field, making 37 of 72 shots, 51%, compared to 33 of 66, 50%. And the Beavers were better from three point range, connecting on 5 of 17, compared to 4 of 18 by the Huskies. But with both teams shooting in the 20s percentage wise from long range, neither were really very good, and its somewhat surprising the score was as high as it was, especially given that there were only 14 fast break points.

The Huskies also defended the pass well, and the Beavers only had assists on 13 of 33 shots, well down from recent games.

Washington held a 36-32 edge in rebounds, despite playing a 3 guard rotation.

Oregon St. fell to 10-3, 0-1 for the season, while Washington improved to 7-5, 1-0. The Beavers' relatively soft non-conference schedule that had produced early enthusiasm may have been exposed as not as effective a preparation as the difficult slate the Huskies faced, and suffered a relatively poor record against as a result, which raised some concern among their supporters.

"Well that is a good team, and it was a good experience for our guys to play a team that has been to the tournament the last two years on their home court," Robinson said. "They played a great game. They got to the basket whenever they wanted to, and they are probably the first team to do that to us on a consistent basis. To our guys defense, we got off to our first bad start, and then I thought that we played them pretty evenly the rest of the game. We had every reason to close shop and move on, but these guys have no quit in them, and I was happy about that."