Caleb Smith started to break through last year, only emerging from the rocky surface of the OSU offense a bit. He was tied with Kevin Cummings for 6th in receptions with 25, he was 5th in yardage with 343, and had 4 touchdowns on the year. Not a top season perhaps, but he flashed some serious potential. He showed up as a red zone target, where he can use his 6' 6" frame to get over defenders. Riley occassionally used him in the screen game, and his speed allowed him to break open downfield. His average yards per catch was actually higher than Brandin Cooks at 13.7, and he did help deliver a number of big plays. He did not create a ton of chances though and maxed out in a single game at 5 catches for 85 yards against Oregon. 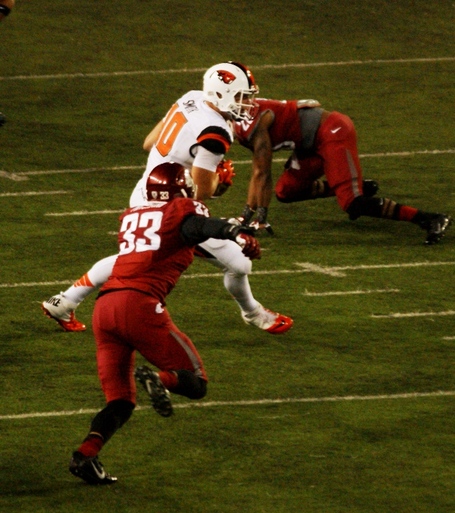 One of his flaws was his blocking however, there were times that defenders would just put one move on him and get right around him. There were also instances of defenders blowing right through him. With his weight at 269 lbs he should not be getting pushed around, and with his athleticism he should not be getting beat by one move in pass protection, or in the run game.

This could be the breakout year for Smith. He has reportedly looked great in camp, with more speed and strength. With the pass catching situation so open too he should be getting boatloads of opportunities. He could be seen in tight end screens, either as the blocker or as the ball-carrier. He will be used in short, intermediate, and deep routes. Even more useful will be his size in the red zone along with Connor Hamlett. How many defenses could look to measure up to that size? 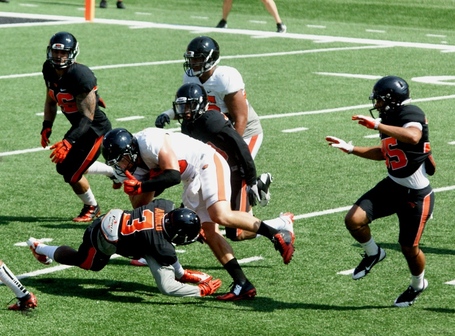 His concerns will come in the mental aspects of the game however. He had instances of repeated false starts, and had a couple fumbles while struggling for extra yards. Both of these can be corrected and as Smith matures he will likely understand how to not make those mistakes.

The Beavers have a fairly proud history at tight end and Smith will help add to it. I believe this is the year that his potential is realized. He is still not a finished product, and that is what makes him so exciting, the Beavers do not have many players with the ceiling that Smith does. If he keeps working at it, and Sean Mannion looks his way, Smith may show his abilities to the conference this year.