Wide receiver Richard Mullaney flies into the ranks at number 8.

Richard Mullaney was the second best pass catcher last season behind Brandin Cooks. With 52 catches and 788 yards he had a decent campaign, scoring 3 touchdowns as well. On a per game basis he accounted for 60.6 yards which comes out to 16.3% of the total receiving yards. He had some big games too when defenses were completely focused on Cooks, amassing 142 yards and a touchdown against Utah, below, and 122 against Washington State. 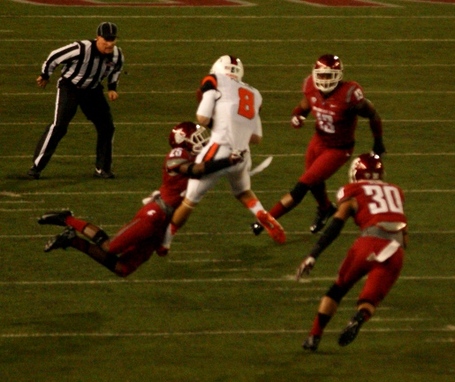 His highlight play of the year was against Utah when he hauled in a pass over a defensive back. He could not even see the ball with his helmet pushed up into his eyes, making it even more impressive after the leap he made to high point the ball.

It was a massive bump up from his freshman season when he only had 156 yards, although that was also behind Markus Wheaton as well. Mullaney has improved already from that year and that trend will continue.

Mullaney will be the number one option for Mannion this season, and he will be up to the task. He is a good receiver, not a burner by any means, but similar to other successful Beavers over the years. He is a player that just knows how to play the wide receiver position. What sets him apart is his hands and his route running, both are above average and allow him to make catches that many receivers cannot. His body control is also solid, allowing him to contort into positions to increase his radius. In general, if you throw it to him the ball will stick to him. 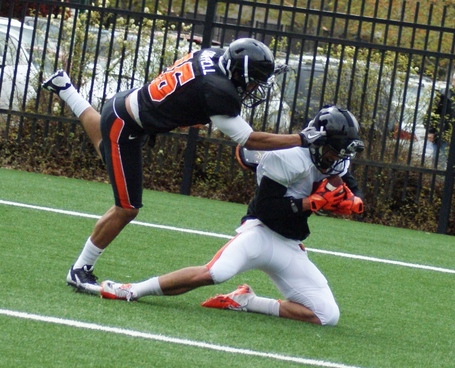 His one concern is that he seems to get dinged up fairly often, including this training camp when he hurt his ankle and was momentarily on crutches. As long as he can stay on the field he should be able to hopefully get around 70 catches and 1000+ yards. It is a tall task to ask for the junior, but he has shown the ability to do so with those huge games. In 13 games it would require 77 yards per game to reach that goal. That seems possible, especially when he was putting up 100+ yard efforts in some games.