Terron Ward has bulled his way into the top 10 at number 9.

Terron Ward started as a backup to Storm Woods, and used his carries well. He ran decisively, he ran hard, and he used lots of spin moves. When Woods went down against Utah it gave Ward a chance to shine and he did in his second game as a starter against Colorado, where he racked up 158 yards from scrimmage and a touchdown. Woods would come take back the starting role when he returned from injury though. As the season went along things evened out and Ward would end up having his game of the season when he piled up 145 yards rushing in the Civil War. 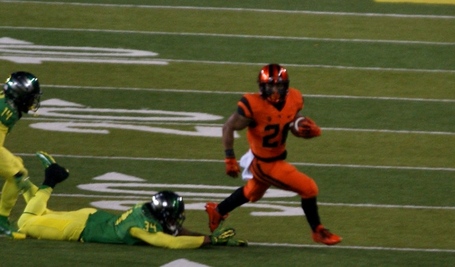 Despite his outrushing of Woods in the Civil War, he was not given as much opportunity in the Hawaii Bowl. He only had 9 rushes to Woods' 16. To be fair they were both extremely effective as Ward averaged 5 yards per carry in that game and Woods had an outrageous 6.69 yards per carry. Tough to pick the hot hand when both of them are burning.

The hot hand approach could hold up, although Ward is listed as the top rb on the depth chart. He earned the role as lead back last year. He did more with less carries and looked pretty good doing it. There was little to no hesitation from Ward, he identified the hole or was appropriately patient and would then turn up the field.

He also was hard to bring down in the open field and in the hole. There were several instances where a defender would get caught up in the spin cycle. There were also demonstrations of strength where opposing players would try to pull him over, only to see him snap back into place and continue churning up yards. He is powerfully built, as a compact 5' 7" and 201 lbs, the power is evident. 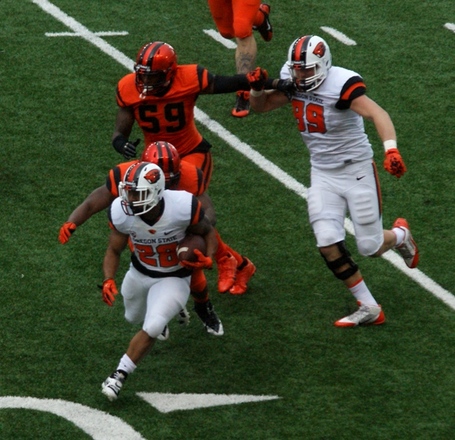 He is also a solid pass catcher and he has improved in pass blocking, which is something that kept him off the field early in his career. Last year he had 34 receptions, which was 5th on the team, and he did a solid job with 8.2 yards per catch. He is turning into a good all-around back, which makes it hard to separate he and Woods into separate roles, but they will both get their touches.

His one real drawback is that he lacks the quickness of Woods, and is not as shifty, but he sure moves well in the open field. His lateral movement is not as good, but he knows how to change pace and adjust in order to keep defenders from just getting him. It is a drawback, but I hesitate to call it a weakness. He has figured out how to work around it.

Ward is a football player. He knows how to play the game, and he has grown steadily across his entire Beaver career. I expect he will continue to grow this year, and help restart the ailing Beaver run game for this season.